Ignorance is bliss, or is it? (the negative breastfeeding labels)

I never imagined I would add this image to my blog. But here it is: a photo of Al Capone, the mob boss and the man behind the 1929 Saint Valentine's Day Massacre. 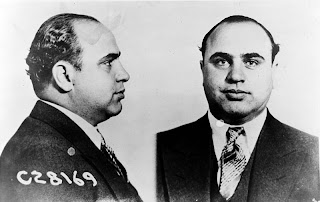 Apparently he and I have something in common: we both belong to mafia. Or so it seems.
Breastfeeding mothers, you see, are often labelled as breastfeeding mafia or mob or Breastapo.

I don't know if people who coined these expressions are just plain ignorant of what mafia and Gestapo are/were, as I actually cannot find any justification of these horrible accusations.

Let's deal with mafia first.
What is mafia? A Mafia group is a type of organised criminal group that attempts to control the supply of protection (Gambetta 1993). The scope of a mafia group is much wider than that of an OCG. Violence and the ability to collect reliable information are two key resources for a mafia group (Gambetta 1993). Mafias are formed by individual crime families that normally control a territory. The Mafia operates without consideration for justice, fairness or the wellbeing of society at large. In the world run by the mafia, there is no such thing as a "right" even to the protection for which one has paid.

Unless you lived all your life in a bubble, you must be aware of the mafia wars, assassinations of political figures and judges as well as murders of the innocent people, torture and execution of the enemies, extortion and financial ruin of its victims etc etc I could flood my blog post with the stats and tell you the data on the thousands of murders committed by the mafia.

Now let's move on to the other despicable organisation, Gestapo, the secret police of Nazi Germany, responsible again for thousands and thousands of deaths of the innocent people. To secure confessions they routinely used such methods as sleep deprivation and physical torture. Again, if you want to find the data, it's very easily done: use the google search facility.

If you use the expressions "breastfeeding mafia/mob" or Breastapo in ignorance, it is not an excuse. You cannot possibly compare the breastfeeding mothers to these organisations which have committed some of the worst atrocities in history. Breastfeeding doesn't maim or kill or put people in the gas chambers.

You have no right to insult women with these disgusting labels.

Apparently some mothers who have chosen to bottlefeed feel inadequate and patronised by their breastfeeding sisters.
Deal with it on a level that won't insult the others.

I have chosen to breastfeed my children and have never talked to any bottlefeeding mum in a patronising way, neither have I criticised anyone's choice.
In fact, if anything I feel harassed by the numerous blog posts ans articles written by women who for some reason decided to bash the breastfeeding choice, it seems to be very trendy at the moment.
I am not an enemy or a mobster, why do you think it is acceptable to insult me and paint the breastfeeding mothers as a pack of wolves who are ready to bounce on anyone who's not one of them? Why do you try to make me feel quilty for my choice? In fact I hardly ever mentioned it to anyone in fear that someone would take an umbrage at the mention of the word "breast". I am hiding it as if it is a dirty secret.
Yes, I'm sure there are some unpleasant women who would give you unsolicited advice on anything and everything, but even they do not deserve to be labelled as mafia or Gestapo.

My personal experience was quite the opposite, both times when I had my babies, the hospital personnel didn't have time or desire to help me with the breastfeeding and forced me to use the formula.
Two years ago, when Eddie was born at JR Hospital in Oxford and I didn't have much milk to start with, the nurses offered me a choice of two types of formula. When I asked if there was any breast milk available from the breastmilk fund, one of them brought a block of frozen milk in a plastic bag to me and almost threw it on the side table with an empty jug. I asked her if they had facilities to defrost it, she just said I should do it using the hot water from the tap. So, clutching my belly (I just had a c-section) and pushing the baby cot on wheels, I had to go to the toilet to try to defrost the milk in the very "sanitary" conditions (there was a tap in the room, but the water was slightly tepid and not hot enough to defrost).  And of course my baby was supposed to drink the icy cold milk. The pediatrician threatened not to sign my release papers until I started giving my son the formula top-ups. Nobody asked me even once if I need any help with the breastfeeding.
I wonder where is all the breastfeeding support when you need it?

I did feel inadequate because I have chosen to breastfeed but I would have never called the nurses who pushed the formula bottles forward as enemies or killers. They are just too busy to help one struggling mother.

As for the newspapers which publish drivel with the titles "Breastapo using the toys to brainwash our children", their editors should be fired for the defamation and libel.

And if you still choose to use these expressions, I am not taking your argument seriously. In my mind you lost it.

Email ThisBlogThis!Share to TwitterShare to FacebookShare to Pinterest
Labels: breastfeeding