I haven't done much crafting since Eddie was born (that is if you don't count the forays into the cake decorating), but hoping to start again, albeit on a very modest scale, as I don't think I'll be given much of an opportunity to plunge into crafting as in the before-Eddie days. I have found this wooden heart in the local vintage The Old Pill Factory shop which has a crafts section. I have written about this Aladdin's Cave of a shop just the other day (have a giggle with me at the sign I have discovered there). This solid wooden heart is primed, and would make a nice base for any paintwork or stamping.
I wanted to do a Christmas decoration, and remembered that years ago, I did some projects with the face molds. I didn't have any left from the old batch, so I ordered a pack of Sculpey Flexible Push Mold from www.beadsdirect.co.uk. As you can see, it is a very useful old for making the art doll faces. 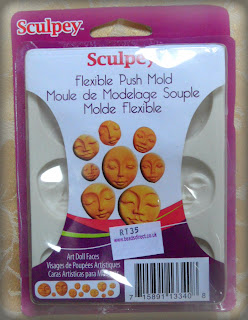 That's what the mold looks like. It is quite easy to use, simply mold, flex and release. You might use any polymer clays or air dry clay. I used the FIMO (flesh-coloured, though it could have been any colour, as I eventually painted it over).
It is easier to release the smaller faces than the bigger ones. They suggest to put the mold in the freezer for about 90 seconds before popping it out. I only read that after I baked the doll faces, I used a tiny bit of olive oil to brush the inside of the faces, that also helped to release them. 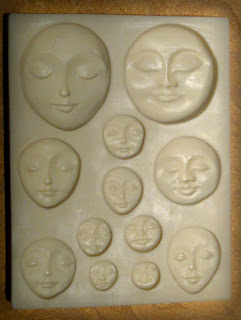 That's how the art doll faces look after the baking session in the oven (30 mins, as per instructions on the FIMO packet). 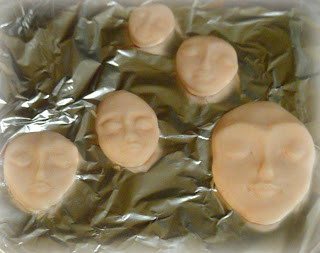 I have painted several faces using the acrylic paints. I must confess, that took me quite a long time, as I have lost my knack after a long period of crafting abstinence. I have placed a smaller face on the heart just to see where to position it. Eventually I used a different doll face for my project. 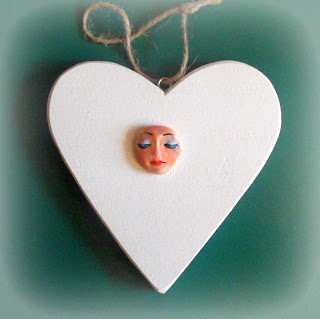 Acrylics were used to paint the wings, hair and dress of the angel. Once the paint was dry, I added a few sparkling gems. The face was attached with the glue dots (thicker variety). 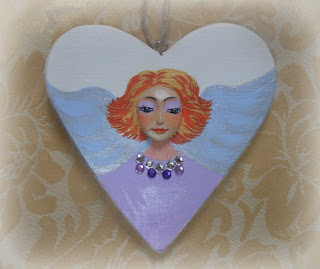 I realised I need to update my supply of paints, as some of them have gone quite dry and I need to invest into some good brushes as well, because my little imp Eddie has destroyed several of my brushes by his over-enthusiastic colouring.

Red Ted Art's Blog will be showcasing a selection of Christmas decorations. Come and join in with your arty creations for the most beautiful festive season.