As my little man and I walked to school this morning, we took the longer route through the fields and the bridge. The birds were singing so beautifully, the sky was clear and the day promised a warm weather. It was one of those perfect moments when you want to repeat after Faust "Stop time! thou art so beautiful".

Later I enjoyed my cup of tea in the garden, admiring the roses (and trying to ignore the weeds).
I've been also enjoying a new book "One summer in Venice" by Nicky Pellegrino which I recently won on Facebook.
My wins this year are pretty much non-existent. My younger son is doing much better winning prizes for sending his drawings to magazines. Just yesterday he received a surprise remote control car from Kraze magazine, which he absolutely loves. Since I'm not winning much, the next best thing is running a giveaway and making someone else smile, when I let them know they have won.

If you miss the doze of Downton Abbey, I have just the right little prize which might cheer you up. On the last visit to Cogges, I picked up a couple of Downton Abbey mugs. Cogges, a 13th century manor house appears in the TV drama as Yew Tree Farm, which played host to many farming scenes as a home to the Drew family.
Here is your chance to win a mug as well as a box of my favourite Russian caravan tea from Whittards (a reference to Dowager Countess's love interest, the Russian Prince Kuragin). I couldn't quite tie in these Earl Grey flavoured almonds from M&S to Downton Abbey theme, but let's say, they are posh enough to go well with the tea. 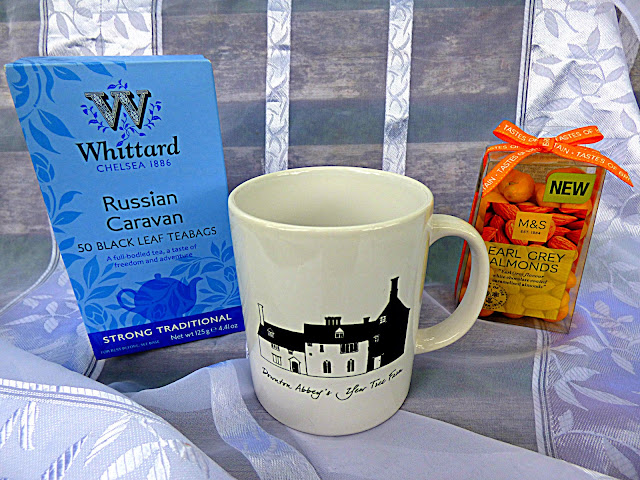 If you'd like to be in with a chance of winning this little prize, please fill in the Rafflecopter form.

Only the first step is mandatory: all you need is answer the question by leaving a comment (if you login as Anonymous, please leave you Twitter name or Facebook name, so that I could identify you, I do not suggest leaving the email address in the comment)
All the other steps are optional, you don't have to do them all. All it takes to win is just one entry.
Only one entry per person is allowed (however, you can tweet daily to increase your chances).
The giveaway is open to the UK residents only. Once the Rafflecopter picks the winner, I will check if they have done what was requested. I will contact the winner, if they do not reply within 28 days, the prize will be allocated to another person.
I will send the prize as signed for.
If Royal Mail fails to deliver, I will fill in the Royal Mail form the size of War and Peace, but I wouldn't hold my breath that they would rush to do a refund.
I would also appreciate if the winner lets me know when the prize arrives, though of course, this is not a condition of entry.
This prize is not sponsored by any brands.
The giveaway ends on 25 July 2015 (midnight).