When I told Eddie we were going to bake some cupcakes today as a rehearsal for the Father's Day, he told me wistfully: "There's Mother's Day, there's Father's Day, when is the Children's Day?". I told him it was the day before yesterday, that's why he got two Hot Wheels cars as a gift. But he was adamant that we didn't celebrate it properly with a big cake. Father's Day is on the 21st of June, so we were doing an early trial of baking some tasty lemon cupcakes, which we plan to serve with a latte in a new magic mug from Truprint.
If cupcakes and latte don't rock your Papa's boat, Truprint has a whole range of gifts for Father's day, there is surely something that will catch your eye.
And to encourage you to spend your money on their range of gifts, Truprint is running a current offer for Father's day, where you can get up to £30 off with a code LOVEMYDAD (see full terms and conditions if you click on the link above, then scroll all the way down on their page).

Actually my husband is away for a few days this week, so we could bake and rehearse without him knowing about the gifts we are going to surprise him with on the day (we'll obviously bake a new batch of cupcakes then).
So, what's that about the magic mug, you may ask. This photo mug is a novelty customised mug, where you add a few photos as well as a message if you want. When you see the mug first, it's all black.
Pour the boiling water, and see how the mug is transformed into a mini-gallery of your favourite photos. I almost squealed with delight when the photos appeared on the mug. I don't know about my husband, but I certainly was as excited as a kid. 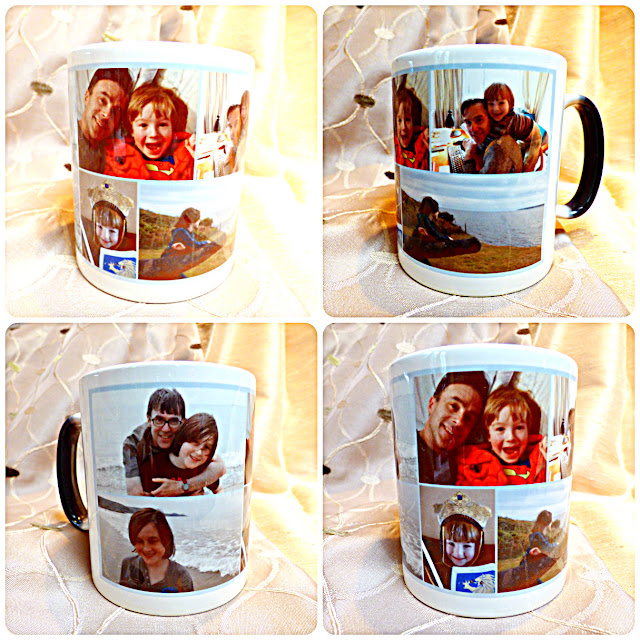 We have quite a few photo mugs at home, produced by different photo companies, but it's the first time I have seen a magic mug in action. And I loved it.

You can add up to 15 photos on each mug, though that might be a tad too crowded. I have picked six images of my boys, on their own, and with their Papa (we don't call him Daddy but Papa).


I have also ordered a set of six coasters, using the same images as appear on the mug, so they can be gifted as a set. And again, I loved them so much, that I am definitely going to order another set to give to my in-laws, as I know they'd love them too.
All these images bring happy memories, I know exactly where and when they were taken. 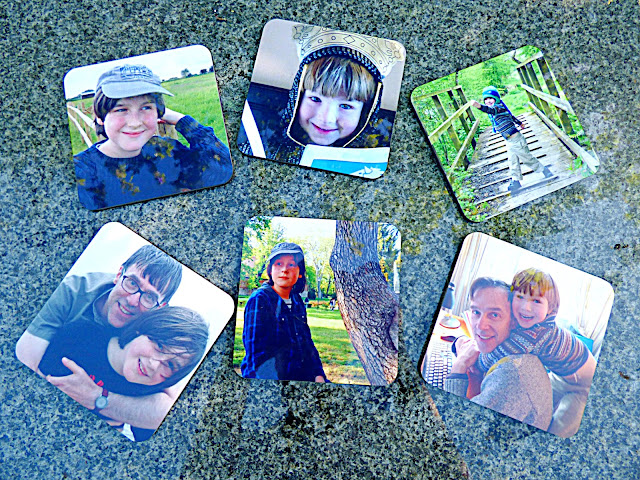 And the third gift from Truprint range is a classic acrylic block with the photo that I love. And though Papa already has several photos of our boys in his office, I'm sure he'll appreciate one more. It will look good among his boring academic books (the photo below shows the books at home). 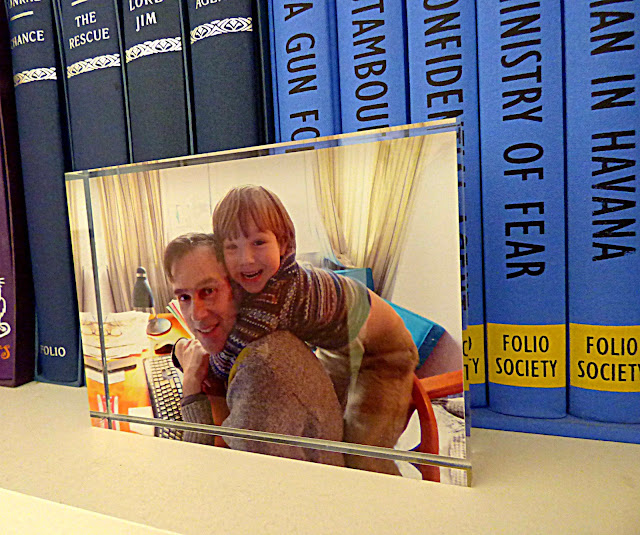 We had a bit of a problem with this item when it arrived, as there was a white spot on the image. I wouldn't have been bothered much if it were on the clothes or interior, but it was on the face.
I emailed the customer  services, they responded immediately, asked to look at the photo of the faulty item and promised to send a replacement. It arrived a couple of days later, so kudos to Truprint for listening and responding so fast. 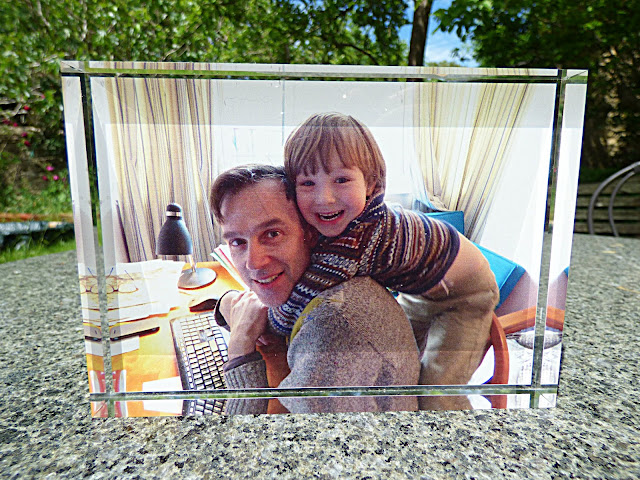 What about our lemon cupcakes? Are you interested in reading our recipe? 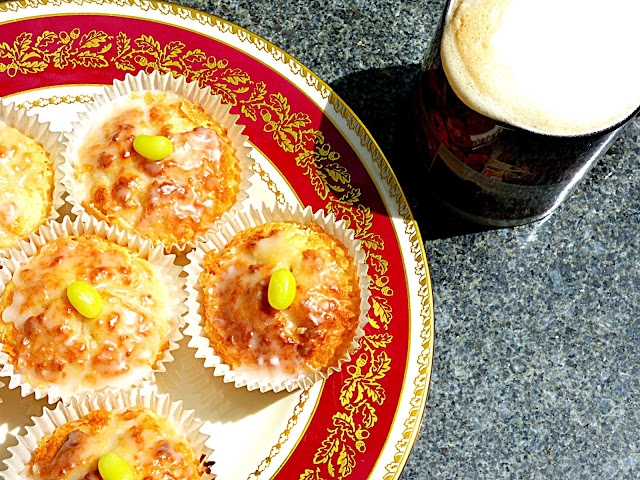 Grate the lemon zest. I used a Sorrento lemon, which I found in Waitrose. It is bigger than the standard lemon, with thicker and juicier skin and a great citrussy aroma. Beat the eggs with the sugar, add the lemon zest and juice, and limoncello if using. Mix well. Add the flour and cornflour and melted butter, mix until you have a very smooth batter.
Pour the cake batter into paper cupcake cases inserted into a cupcake baking tray. Sprinkle some mini lemon meringue sprinkles or pine nuts on the cupcakes before baking. Place the tray in the oven preheated to 180C and bake for about 20+ minutes. Check readiness with a wooden toothpick.
Take the cupcakes out of the oven and let them cool. If decorating with the icing, mix about 4 heaped tsp of icing sugar with lemon juice (just add a bit at a time until you get a runny consistency). That should be enough for 6 cupcakes. We did a mixed batch. Top up with a Jelly Belly.
Both of my boys loved the cupcakes, and I'm sure Papa will love them too, once he has a chance to try them on Father's Day.
I know he'll love all his gifts. 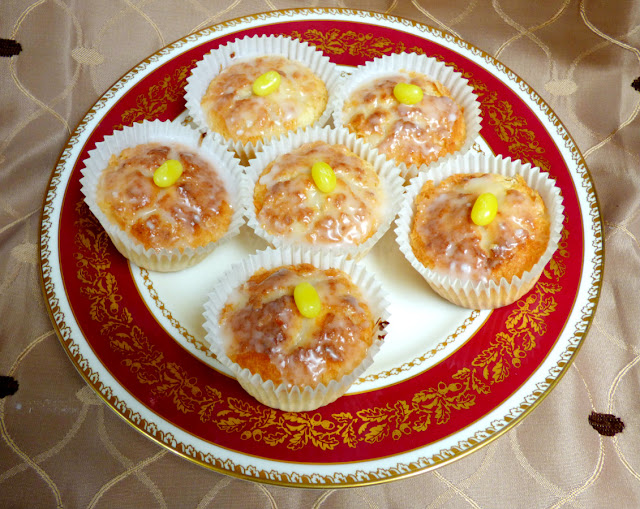 Disclosure: I received a credit to spend on gifts for Father's day at Truprint. All opinions are mine.