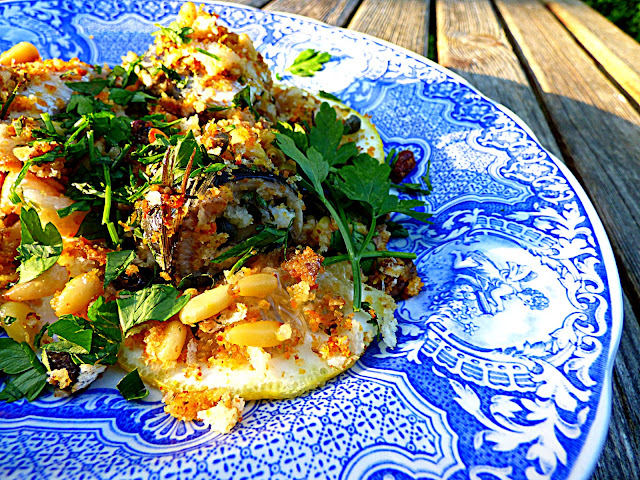 The Snack Thief starts with the following paragraph "He woke up in a bad way. The sheets, during the sweaty restless sleep that had followed his wolfing down three pounds of sardines a beccafico the previous evening, had would themselves tightly round his body, making him feel like a mummy..."
Being a foodie, you read the novels the "wrong" way, as you pay too much attention to details which probably distract from the narrative. The Snack Thief is after all a detective novel. But then maybe not so "wrong", as Inspector Montalbano is the greatest foodie of all. His love of food is so great that he cannot abide having a conversation while he's eating.
Andrea Camilleri's series of Inspector Montalbano books features many recipes and mentions a lot of local Sicilian dishes. It is in a way a culinary encyclopedia of Sicily. It has inspired culinary tours, something that I would love to do one day.
There is also a book called Nivuro de siccia - a cook book of recipes inspired by the adventures of the most astute Commissario.
Just last week my husband was giving a talk in one of the Italian towns, and he mentioned that he has eaten sarde a beccafico. I haven't tried this dish before, and was very curious.
Sarde a beccafico is a Sicilian speciality named after beccafico or garden warbler in English. Apparently it is very partial to figs, hence the name which literally means a fig-pecker. The sardine fillets are stuffed, rolled and roasted or baked in the oven. I cannot say that my rolled stuffed sardines looked like any bird, but having a good look at the images online, I didn't think any of them did. 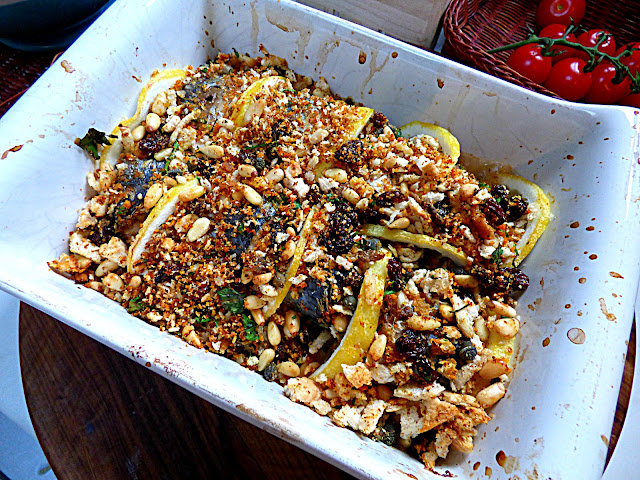 I have found the recipe for Sarde a beccafico in Nivuro di Siccia book, and also checked out a few recipes online. There are quite a few variations, both ingredients- and presentation-wise. My version is something in between. 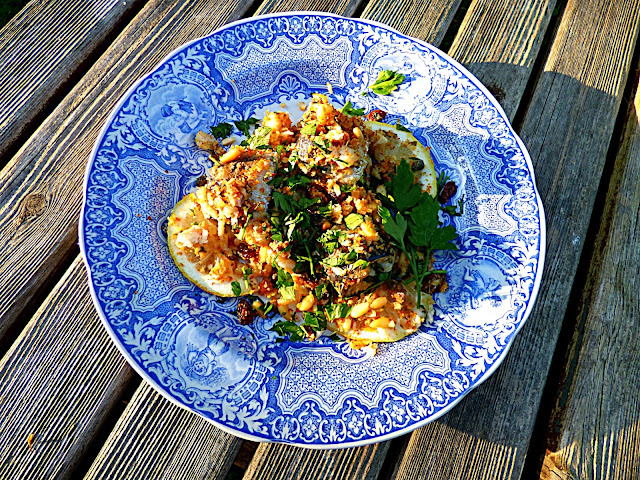 Sarde a beccafico
Ingredients:
4 sardines, heads removed and filleted
3 whole anchovies
2tbsp olive oil
55g breadcrumbs
1 heaped tbsp capers, rinsed from salt
30g pine nuts
40g raisins
zest and juice of 1 orange
1 lemon
flat leaf parsley, about 2tbsp, chopped
And for the authentic recipe use fresh bay leaves. I forgot to buy any fresh bay leaves, so used a dried variety.
Start by filleting the sardines, or if you are lucky to find sardine fillets, just wash them and pat dry with the paper kitchen towels.
Fry the anchovies in the olive oil until almost melted, add the breadcrumbs, raisins and capers as well as pine nuts, cook until the breadcrumbs are golden brown. Zest the lemon and orange and add the zest to the breadcrumb mix.
Roll each fillet with about 1tbsp of stuffing inside. Place all the rolled sardines in a dish or tray slightly oiled, with the bay leaves on the bottom (or put them between the sardine rolls). Slice the zested lemon into discs, then each disc in halves, and put the lemon slices all between and around the fish. Squeeze the orange juice over. Sprinkle the remaining breadcrumbs over the fish. Place the tray in the oven preheated to 180C and cook for about 15 minutes.
Sprinkle some finely chopped flat leaf parsley before serving. 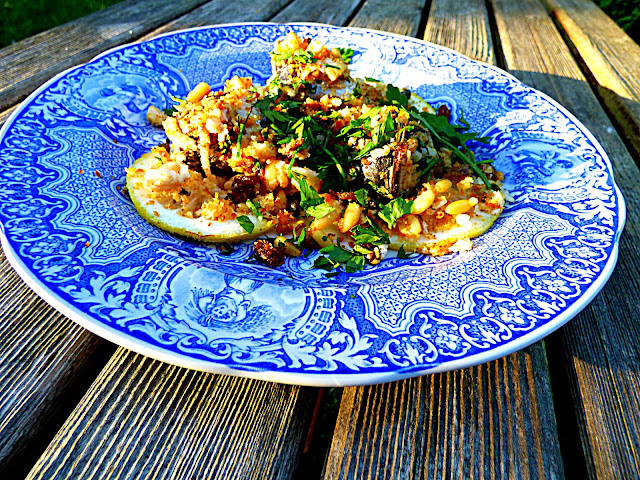 This was a very enjoyable fish dish. I was not sure how raisins will work with the fish, but they complemented each other nicely. I can see why Montalbano ate a kilo and a half, though I don't think I could compete with him. I had three rolls and felt stuffed like sarde a beccafico myself. 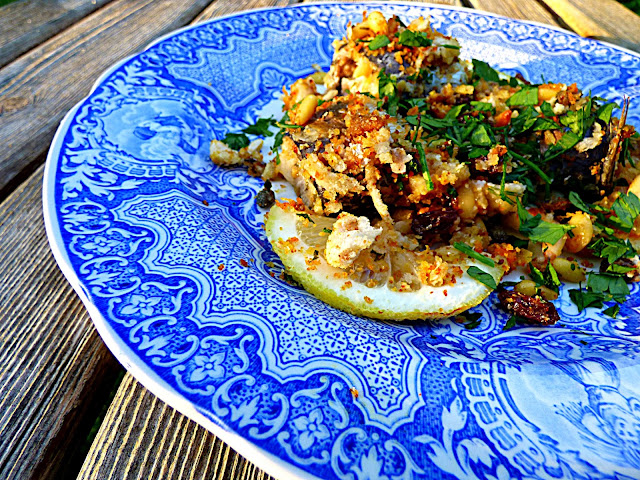 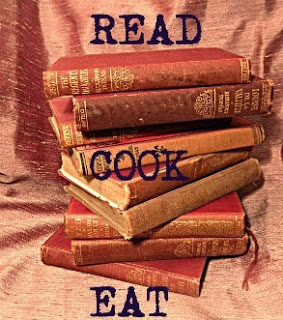