From the witch's cauldron

Take one witch with a cauldron aka Mamma Varese with her pots & pans, put on a thinking bonnet and try to use all the pumpkin flesh that was left over from the carved pumpkin.
And in the spirit of Hallowe'en make your food playful and funky. Should be dead easy, shouldn't it?! 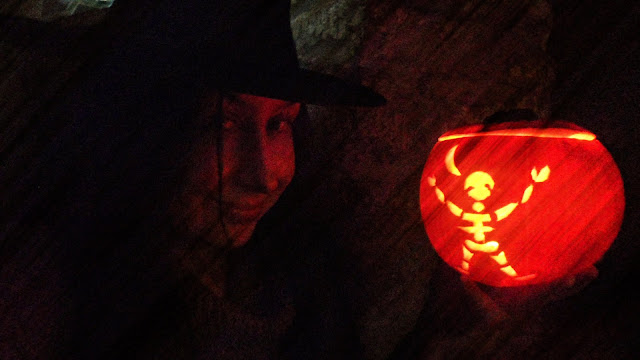 Now I have seen somewhere in the Blogland the image of the stuffed peppers which had been transformed into the mini-Jack-O'Lanterns, but can't seem to remember where, not that it matters, as I am just using the idea for my own recipe. 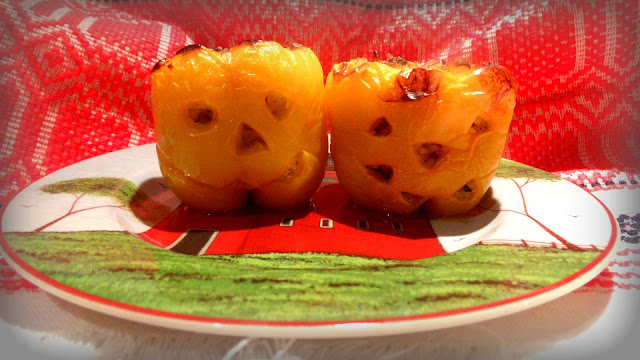 I have recently received a packet of a new Tilda rice: British Curry rice, created by 2010 MasterChef winner Dhruv Baker, so I wanted to try it, but you can choose any other Tilda rice, jasmine or long grain, or cook whichever rice you fancy.

First prepare your containers for rice mix. Put the peppers into a medium pan with boiling water and cook for about 5 minutes. Take them out of the water.
Place the mini pumpkins in the preheated oven and cook for half an hour, take them out, once they are not too hot to handle, cut off the tops and scoop the inside.

Take the skins off the sausages, add to the frying pan with the olive oil and chopped onion, and using a wooden spoon, break it into pieces. Fry for about 5-7 minutes. Let it cool a bit, mix with rice.

Fill in the pepper and pumpkin shells with the rice mix, place on a tray and in the oven, bake for about 15 minutes at 180C.

You can also add a bit of grated cheese on top  for the last five minutes in the oven. Or top up with a spoon of plain yogurt or soured cream.

Taking a thin knife, cut out the eyes, nose and a scary smile. 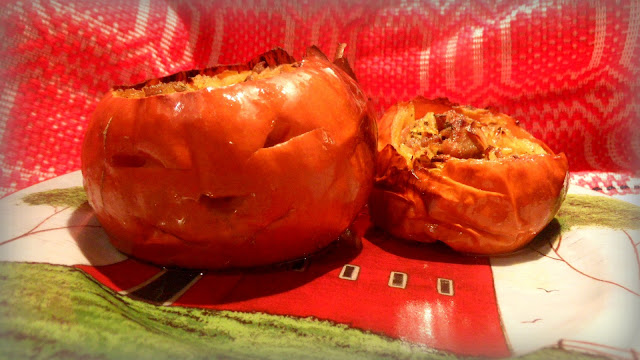 For "Ghost soup" use any orange-coloured veg that you have at home: pumpkins, squashes, carrots and sweet potatos. Start with roasting all the cubed veg on a tray in the oven, drizzled with the olive oil, add a few cloves of garlic and a few rosemary sprigs. Roast for about 35-40 minutes at 180C.
Once the veg is done, place it in a medium pan, add a few tablespoons of dry red lentils, pour water and cook on low for half an hour. Later blitz the soup with the blender.
I am not making a proper list of ingredients, as the whole idea of this soup is to use the veg that you have.
I think I had at least 2 carrots, a parsnip too, though it is not orange-coloured, about 600g of cubed squash,  sweet potatoes and scooped pumpkin. 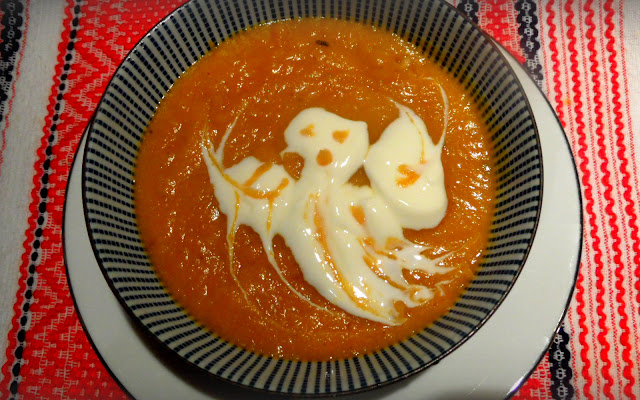 To make the ghost, add a few blobs of plain yogurt on the surface of the soup, using a wooden toothpick or skewer, carefully connect the blobs and do the lines, so that the white of the yogurt is drawn on the orange soup, and by dipping the skewer in the soup, make the dots for the eyes and mouth. 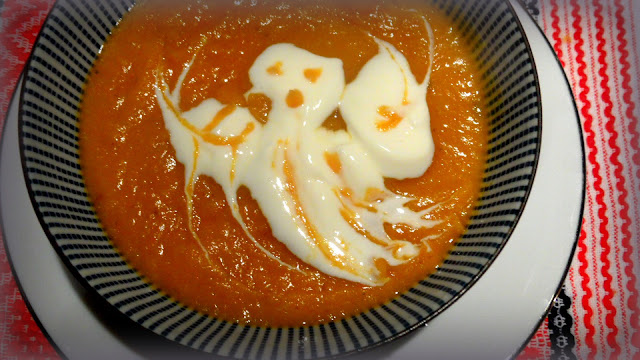 Serve with a good chunk of fresh bread, preferably stonebaked or sourdough.
Posted by Galina Varese at 18:08:00