In the former Soviet Union the Georgian cuisine has always been rated very highly, and no wonder, as it is incredibly versatile. One of the staple dishes adopted from the Georgian cuisine by many Russian families is the Chicken Tabaka. What I offer you today is a rather bastardised version of it.
The name Tabaka comes from the word tapha which means a heavy skillet. For the authentic recipe you will need a whole chicken or poussin rather than fillets or thighs.

(If you are cooking a whole chicken, you'll need to cut the breastbone and flatten the chicken. I cooked the chicken pieces).

Wash the chicken and dry pat with the towel. Rub the spice mix generously.
Heat the skillet with the added olive oil.
Place the pieces of chicken in the skillet or frying pan and cover them with a heavy lid, it has to be smaller in size as it needs to press the meat to the skillet. Cook for about 10 minutes on high, turning them a few times. Lower the heat and cook for another 10 minutes on low. 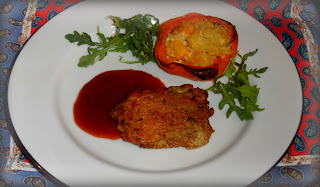 Serve with salad and vegetables. This dish is usually served with tkemali (Georgian plum sauce).
I didn't have any tkemali so I improvised and made a red wine sauce with red wine, a dash of balsamic vinegar, butter, flour and red plum jelly, can't tell you the exact quantities as I was adding bits and pieces, mixing, tasting, adding more until I was happy with the consistency and flavour. It might not be a tkemali but it was a homage to it and a lovely sauce for my dish.

I had a packet of khmeli-suneli that my Mum brought with her from Russia on my request. It is a beautiful spice mix which works perfectly with chicken.
You can buy khmeli-suneli online, for example, at Seasoned Pioneers.
Or you make your own spice mix. Wikipedia gives a recipe for khmeli-suneli.