Last Sunday Eddie and I sat comfortably to watch Snowflake the White Gorilla DVD. Sasha was busy with his ipad, but he was nearby and kept glancing at the screen. This family film has just been released on DVD and Blu-Ray on 7 October 2013. 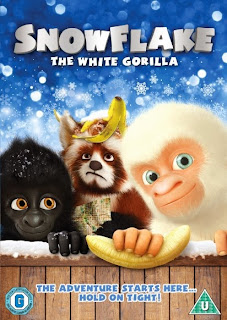 What's the plot?
An albino baby gorilla comes to live with the human family and befriends Wendy, a vivacious girl, before being sent to reside in Barcelona Zoo. Wendy names the baby gorilla Snowflake. The other gorillas won't accept her in their tribe because she is different. Incidentally this rejection has been imposed by the pater familias of the gorillas' family. Doesn't it reflect the real life, when children copy their parents' behaviour and nasty ways?!
Snowflake becomes a major tourist attraction at the Zoo.
And she plots to escape from the Zoo together with her friend, red panda Ailur who considers itself to be a reincarnation of a Buddhist black panther. They approach a powerful witch and ask her to make Snowflake's fur go black.
Will the witch help Snowflake? Will she be able to turn her "normal"? You'll have to watch the film to find out. 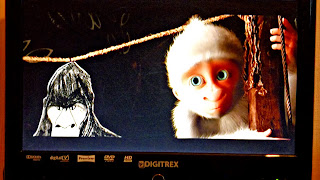 As often happens in children's animation/feature films there is a villain who wants to capture Snowflake. He believes her white fur would be a powerful amulet against the bad luck. He is a masculine version of Cruella De Vil.
What did we think of the film?
First of all, I expected it to be pure animation from the cover image. But this is a film with real/live actors. The animals are the product of animation.
The voice cast includes David Spade (Grown Ups), Christopher Lloyd (Back to the future) and Janette McCurdy (Malcolm in the middle). (I must confess, I only ever watched Back to the future, so don't quite know who two of the actors are).
This film is targeting a family audience but I found that at 3 years old, Eddie's attention was wandering. He enjoyed the animation scenes and got easily bored with the live actors, so at some points I had to fast-forward it. It is also probably a bit too childish for teenagers. So, in my estimation it is for ages 3+-12 and the benevolent parents who enjoy watching family films.
The plot is entertaining enough, and the message that we should appreciate that we are all different is a good one.
As I was searching for white gorillas online, I found out that the film is based on the real life story of the albino gorilla Snowflake who lived in Barcelona Zoo for almost 40 years and became the emblem of the city. 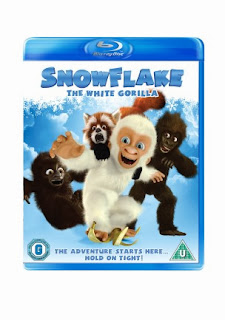 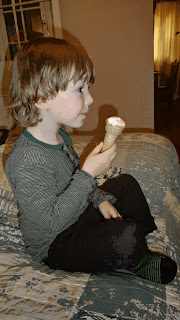 If you want to read more reviews of Snowflake, read Madhouse Family Reviews.