Are you a fan of deftly twisting action movies? I am more of a Downton Abbey girl, but sometimes enjoy gritty dramas and thrillers. Hummingbird which is avaiable on DVD and Blu-ray from 21 October 2013 starts rather slowly.
Joey Jones (Jason Statham), an ex-serviceman, is on the run from a court martial. He is what could be decsribed as damaged goods, a tramp sleeping in the box, drinking himself into the oblivion. When he and his girlfriend Isabel are attacked by the local thugs, he manages to escape and literally falls into an empty apartment whose owner is away in the States for several months. Rather conveniently (and that I found a bit implausible) there is a credit card and a pin number in the mail, the car keys and the whole lot of trendy suits. But once you decide to swallow this slightly unlikely scenario, it gets interesting. 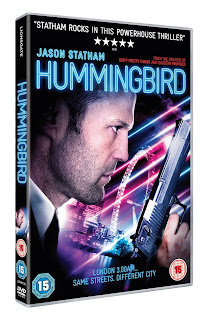 This film marks the directorial debut of the screenwriter Steven Knight who is famous for Eastern Promises (in fact that alone sold the film to me, as Eastern Promises was a truly engrossing thriller).
Joey assumes the identity of the conveniently absent owner of the apartment and attempts to reinvent himself. He is empolyed by the Chinese mafia and excels in his job.
Along the way he is trying to find out what happened to his girlfriend Isabel. A Polish nun Christina helps him with the information. Joey is bent on revenge when he learns of the brutal death of Isabel.
The strong points of this film are the honest scenes of the London criminal underground (there are some very memorable and heartbreaking scenes of the human trafficking).
Angels have their dark secrets, and baddies are capable of doing good deeds. The films uses a variety of forays in the past, exploring the hidden memories, both of Joey and Christina.
While Statham is pretty convincing as a thug and vigilante, Agata Buzek's nun is less so. Her face hardly shows a change of emotions. And though Joey and Christina's relationship is touching, it is not a very cogent storyline. Joey's sexual identity is also under a big question mark, it's not very clear whether he is gay or only pretends to be in order to deceive the prying neighbours.
This film is not flawless, but the narrative is gripping, and only the stone-hearted won't sympathize with the main protagonist. Will the twilight criminal world destroy Joey completely or will he be able to escape?


If you would like to win this prize, please fill in the Rafflecopter form.
T&Cs:
Only the first step is mandatory: all you need is to answer the question by leaving a comment (there is no right or wrong answer)
(if you login as Anonymous, please leave your Twitter name or FB name, so that I could identify you, I do not suggest leaving the email address in the comment)

All the other steps are optional, you don't have to do them all. All it takes to win is just one entry.
Only one entry per person is allowed (however, you can tweet daily to increase your chances).
The giveaway is open to the UK residents only.
Once the Rafflcopter picks the winner, I will check if the winner has done what was requested. I will contact the winner, if they do not reply within a week, the prize will be allocated to another person.

If you haven't used the Rafflecopter before, you might want to watch this simple video.
The giveaway will close on 17 November 2013 at midnight (the night from the 16th to the 17th)

Many thanks to everyone who entered this giveaway! I enjoyed reading your DVD choices and recommendations!
The Rafflecopter picked the winners, big well done to Rob, Tracy and Lowri! I have just emailed you all, asking for your address details.
Posted by Galina Varese at 11:39:00