Eddie has been enjoying the bug-watching (or is it a bug-spotting?) since he was very little. I remember him being engrossed in the antics of the ants in the garden, you couldn't budge him from his vantage point. Bees, spiders and flies, all these creepy-crawlies seem to be fascinating and thrilling to my mini-Gerald Durrell.

Durrell's My family and other animals is one of my most favourite books, which I revisit every now and again. Who would have thought that my own child would find the subject of the insect world as enchanting. Though I am less tolerant than Gerald's mother, I wouldn't want any of these wonderful creatures in our house. Show me a spider, and I want to run away. Let them be observed outdoors.
Our garden attracts lots of bees and butterflies, and whenever I am weeding and digging, there are numerous bugs and worms to be found. And lots of other marvellous things that I would rather not see.

Earthworms, love them or hate them, you cannot deny they are very useful. But did you know there are many varieties of the earthworms?
Well, you might know, but I never paid much attention until I got to read about Riverford's Big Worm Dig project.
There are four ecological groups of worms: the soil eaters, composters, the deep burrowers and the litter dwellers.
Eddie doesn't need to be asked twice if he wants to dig, he is always ready to dig in the garden. Even in the rain.
Riverford and the Natural History Museum asked the children and their parents to rummage in the gardens for their survey and identify the worms.
Eddie the mini-Darwin is not squirmish at all when it comes to the creepy-crawlies. He's been known for "tasting" the worm once and then putting it back in the soil, when he was younger.

So, to help the Big Worm Dig we went in the garden and chose a spot for digging. As you can see from the photos above, we found quite a few friends.

Recently BritMums came up with an exciting blogging challenge called Little Adventures Linky, celebrating our children's curiosity and the little things that capture their imagination. I completely share their motto "Small things make a difference".
Imagine my little man's delight when the Bug Barn arrived together with a book on insects and two packs of yummy snacks. I wonder how did BritMums know about Eddie's love of bugs?! They must be psychic! 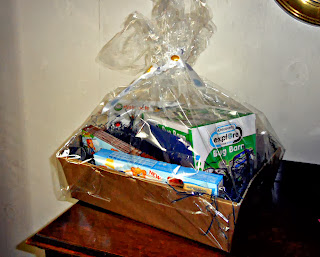 We put a couple of worms aka pets in the Bug Barn to observe them better. Do not worry, they were later safely deposited back in the spot were they were dwelling.
We also found an incy-wincy spider at home and watched it moving inside before releasing outside in the garden. 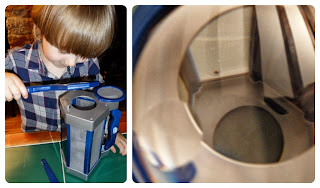 After all that digging and admiring the worms what could be better than a tasty snack?! How does the idea of a bear-shaped sponge snack appeal to you? Bite it, and be surpised: there is a hidden soft creamy centre, how's that for a discovery? Barny snacks come in two flavours: Chocolate and Milk. They contain no artificial colours or preservaties, and are child-friendly. But who said they are only for kids? As the foodie-tester I just had to sample them too. They look darn cute and taste lovely.

This post is an entry for BritMums "Little Adventures Challenge" (link removed as expired) in partnership with Barny, the bear-shaped snack providing a little discovery in every bite. Find out more about Barny here.

Disclosure: we received a lovely hamper, with Barny snacks and a discovery kit. Many thanks from Eddie, his family and other animals!