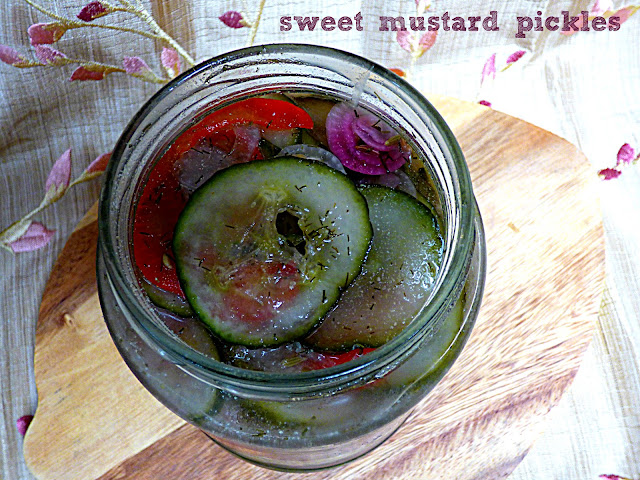 I love pickles, as simple as that. It must be in my genetic material, as the Russians are well known for their fondness for a good old pickle. And I'm always on the lookout for new recipes. One of my favourite boards on Pinterest is Jams, Pickles and Preserves, where I add whichever recipe took my fancy. Browsing through the latest issue of Sainsbury's magazine, I came across a few recipes created by the "preserves queen" Thane Prince. While I haven't liked the sound of the strawberry jam with liquid pectin (I generally don't like added pectin in any jams or jellies as I believe it changes the flavour and the texture becomes too solidified), I was very curious to try her Sweet mustard pickles. If you have the magazine, the recipe is posted on page 80. 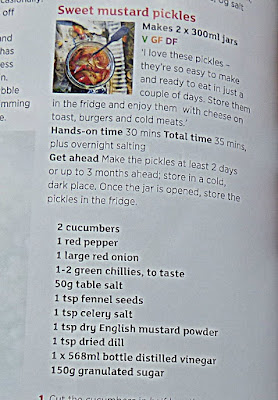 I haven't changed anything except using a red chilli pepper rather than a green one, and haven't scooped the seeds from cucumbers.
Having sliced all the veggies - 2 cucumbers, one big red onion and 1 sweet red pepper - with the mandoline slicer (thanks heaven for the OXO Good Grips mandoline slicer, which makes the slicing job a mere doddle), I have sprinkled them generously with salt, and left in the ceramic dishes covered with the plastic film overnight in the fridge. I put the setting on quite thin for all vegetables. 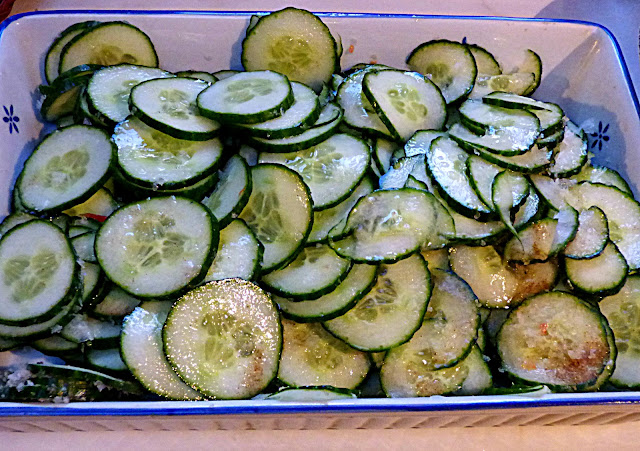 Next morning, I put all the salted slices in a big pasta colander and washed under the running cold water, to get rid of all salt. At that point the vegetables were semi-cured with salt, and nothing special yet. 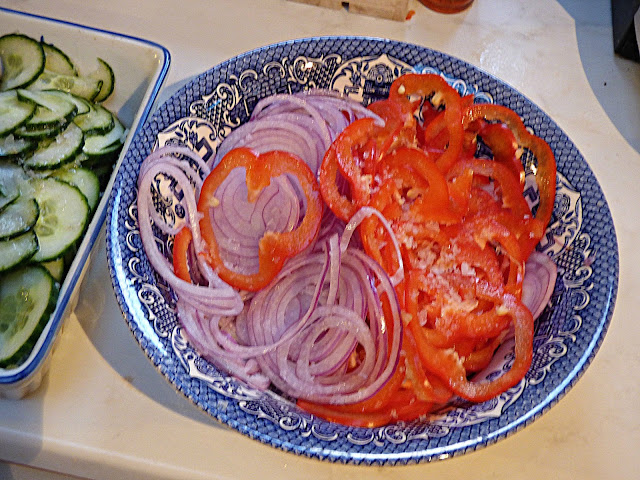 I left them drain for an hour in the colander rather than dry on a clean towel as suggested in the recipe.

In a saucepan, mix the vinegar with sugar and spices - mustard powder, fennel seeds, celery salt and dried dill, then bring to boil, lower the heat and simmer for 5 minutes.

Put the veggies into sterilized jars and pack them tightly. Pour the hot brine over the veggies and seal the jars.
Let the jars cool completely before putting in the fridge. The pickles should be ready in a couple of days and will last up to 3 months.

Now, what did we think of the taste? I loved the mustardy sweet flavour, but wasn't very keen on the "muddy" brine. The mustard powder stayed at the top of the jar, and the brine looked like murky water. Next time I try this recipe, I will use mustard seeds instead, they will look much prettier in the jar, and will keep the brine clear.
I also added a handful of baby tomatoes to one of the jars with pickles.

I have tweeted the photo of my jar of pickles to Sainsbury's magazine, they kindly RTed it and tagged Thane Prince. She suggested that the cucumbers should be all covered with vinegar, not like in my photo at the top. I agree with her, they should have been covered, and there was enough brine, but interestingly enough, the photo in the actual magazine clearly shows veggies well above the brine. I guess it was done for the purposes of the picture, but so was my photo, I piled them up higher so that one can see what's inside rather than the powdery mustardy brine at the top.
As the song goes, Do what I say, not what I do. But honestly, this is a sensible advice: if you make your own pickles, make sure they are covered well with brine.
Saying that, one jar is already empty. I did say, I love my pickles. 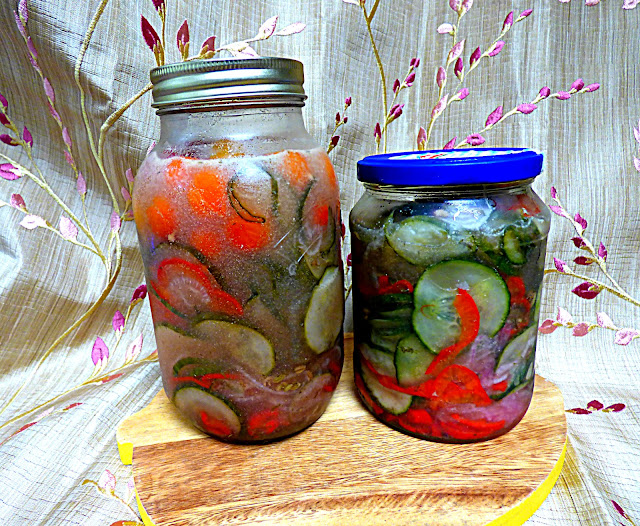