Burns night dinner (minus the pipers)

If you think Burns Night is only celebrated in English-speaking countries, you will be wrong. Robert Burns' poetry is well known and much loved in Russia. There are numerous Robert Burns' societies, and many Russians are happy to host a Burns supper. Saying that, I doubt many of them serve a genuine haggis.
I have never tried this famous dish before, that is until the last night. Blame it on my blogging inspirational foodie friends, Karen from Lavender and Lovage and Cheryl from Madhouse Family Reviews.
I have been admiring numerous recipes and photos of the traditional Scottish food on their blogs, and finally took the plunge and bought a haggis. Traditionally the menu includes "haggis wi' bashit neeps an' champit tatties". My husband is not a big fan of any mash, and I just knew he would avoid eating swedes in whatever disguise they were presented. 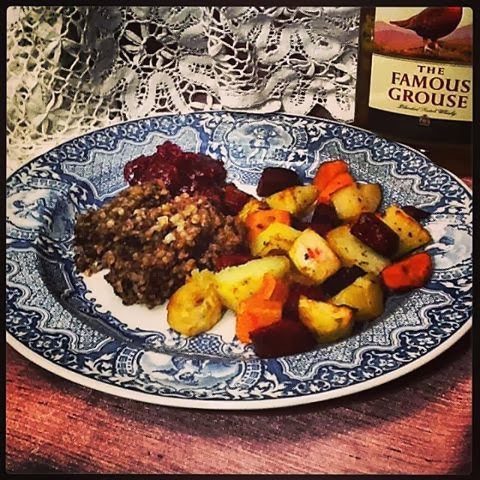 I bought the Macsween's haggis, as from all reports this was the real thing to try. According to their site, "A Macseeen haggis contains lamb and beef that is cooked before being combined with a unique mix of oatmeal, onions, pepper and spices. This is then packed into a traditional or clear casing, after which the whole thing is cooked once again, before being vacuum packed" 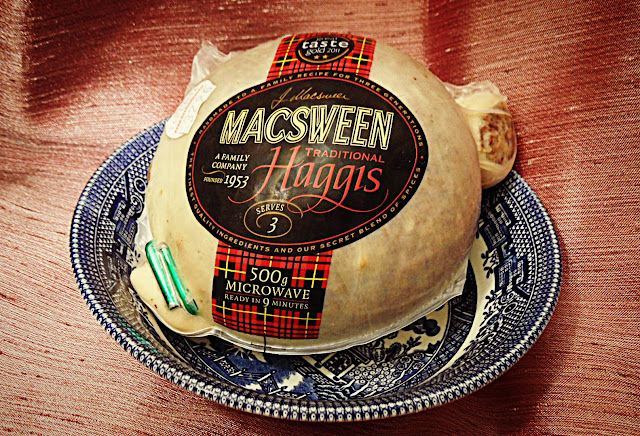 I cooked the haggis, following the instructions on the packet. Ta da! I brought in a big plate with haggis and veggies. Lacking a piper, it was still a Scottish-themed dinner, or at least it appeared so to us, Russian-Italian family. 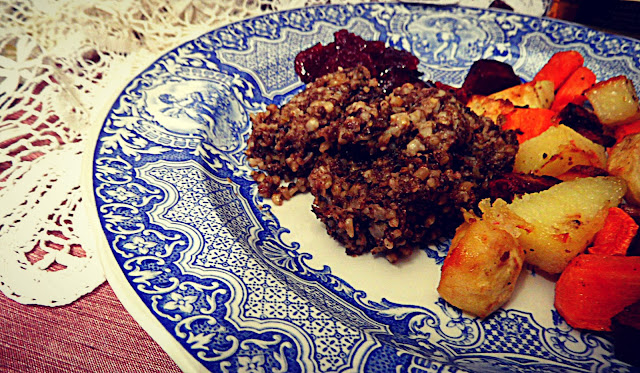 In texture and consistency the haggis reminds me of the Russian dish called kendyukh, which is basically a stomach filled with buckwheat groats, spices, onions and offal. My Mum told me that when she was a kid, her grandma used to cook it for hours, and that the aroma was fabulous. I don't think I have ever tried it either.
I loved the sight of roasted "tartan" vegetables on Karen's blog, and totally nicked her idea. To see her recipe, just follow the link. I didn't have any Scottish heather honey, and though I grow thyme in the garden, it was raining so hard that I didn't dare to venture out to pick some for my veggies. Instead of the smoked sea salt, I used the sea salt with dried rose petals (well, I thought, that wild roses do grow in those parts of the world, so it will be Scottish enough). 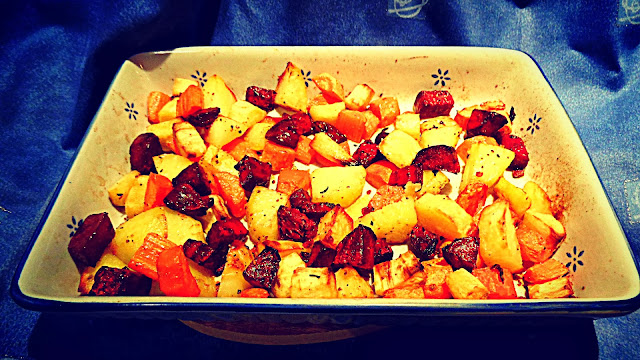 For my veggie dish I cubed 3 potatoes, 2 carrots and 2 parnsips, tossed them in the olive oil and seasoned with sea salt with wild rose petals, and a bit of black pepper. I roasted the cubed beetroot separately in a small dish, so as not to turn the other veggies pink, and mixed all the veg together once they were well cooked. 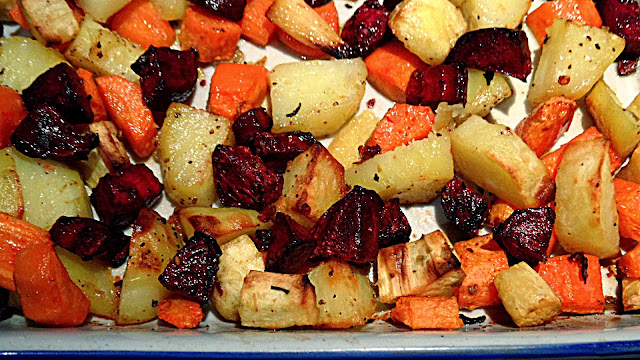 This is a great side dish, and I will be definitely doing it again. 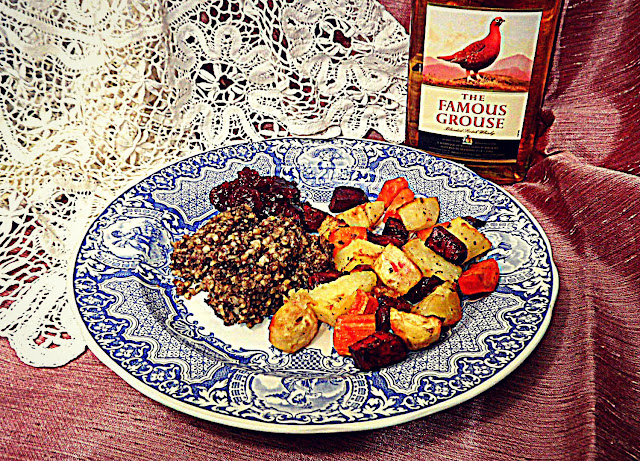 What did we think of the haggis? It is an acquired taste. Quite spicy, I thought. It also reminded me of the Ferrarese speciality, salama for Christmas, which is also a big ball of spicy meat (though the recipe for salama is different). My husband and I agreed that it was nice. I am actually quite curious now to try the vegetarian variety. 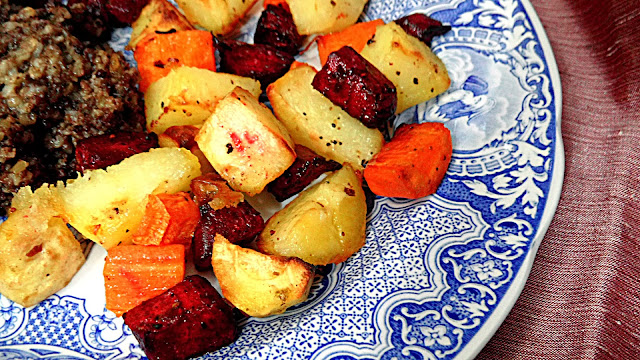 And to round off the Burns night we had some Cranachan, made with defrosted raspberries, crunchy oats, cream and quark,whisky and honey as well as the delectable Raspberry and Redcurrant syrup from Selsley Foods. 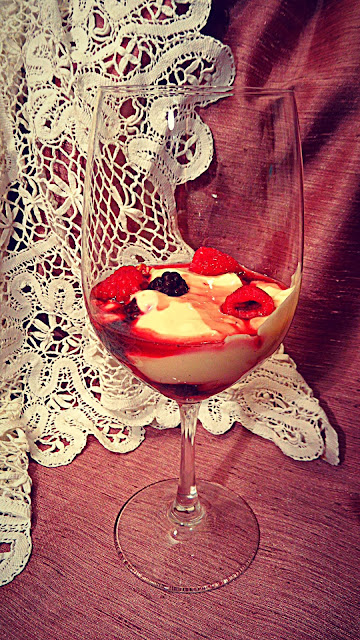 I had to buy a bottle of whisky for the recipe. I know almost nothing about whisky, and got the smaller bottle of The Famous Grouse. It will last me a year or so, if I use a couple of tablespoons at a time in cooking. It will probably be lovely in roast fruit dishes like figs or quinces. 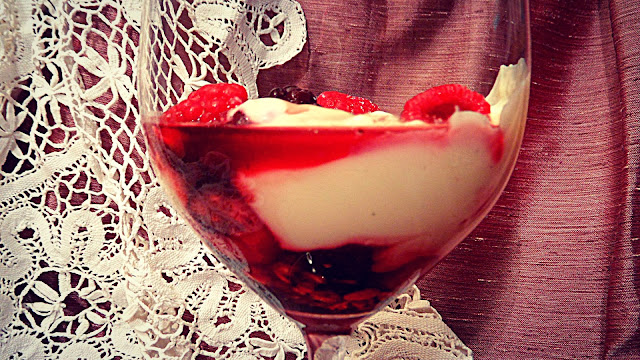 For more haggis inspiration, read the posts by my friends
Veggie Haggis with baked onions & tomatoes

The next day we had the leftover haggis in roast sweet pepper shells, mixed with grated carrot and topped with quark. 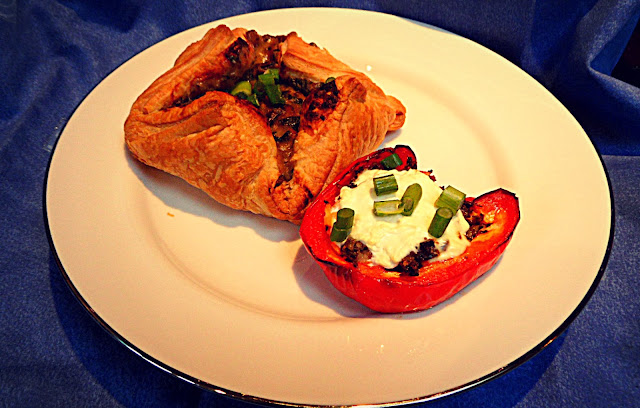 Did you celebrate the Burns Night?