"Mama, are you trying to win that school bus for me?", ever hopeful, Eddie has been asking me, when I was entering a giveaway to win Sidney the school bus from Wow toys on one of the parenting blogs. I kept telling him that I was trying very hard indeed, tweeting daily. Alas, another Mummy won it for her little boy or girl, and Eddie was very disappointed with my winning skills. He shouldn't complain though, as I recently bought a Wow toys Emergency Rescue Bundle (a set of 4 vehicles) for him. I had some vouchers for amazon, and though I coveted some new fancy cake tins, I gave up under the onslaught of daily requests and bought a set, especially that it was at half price. Wow Toys know how to appeal to their young audience, as each toy comes with a spreadsheet which features all the toys in their collection along with the colouring page. Eddie studies it very seriously and makes a wistful face, saying how much he wants a bus/safari truck/lunar van/fireboat etc etc 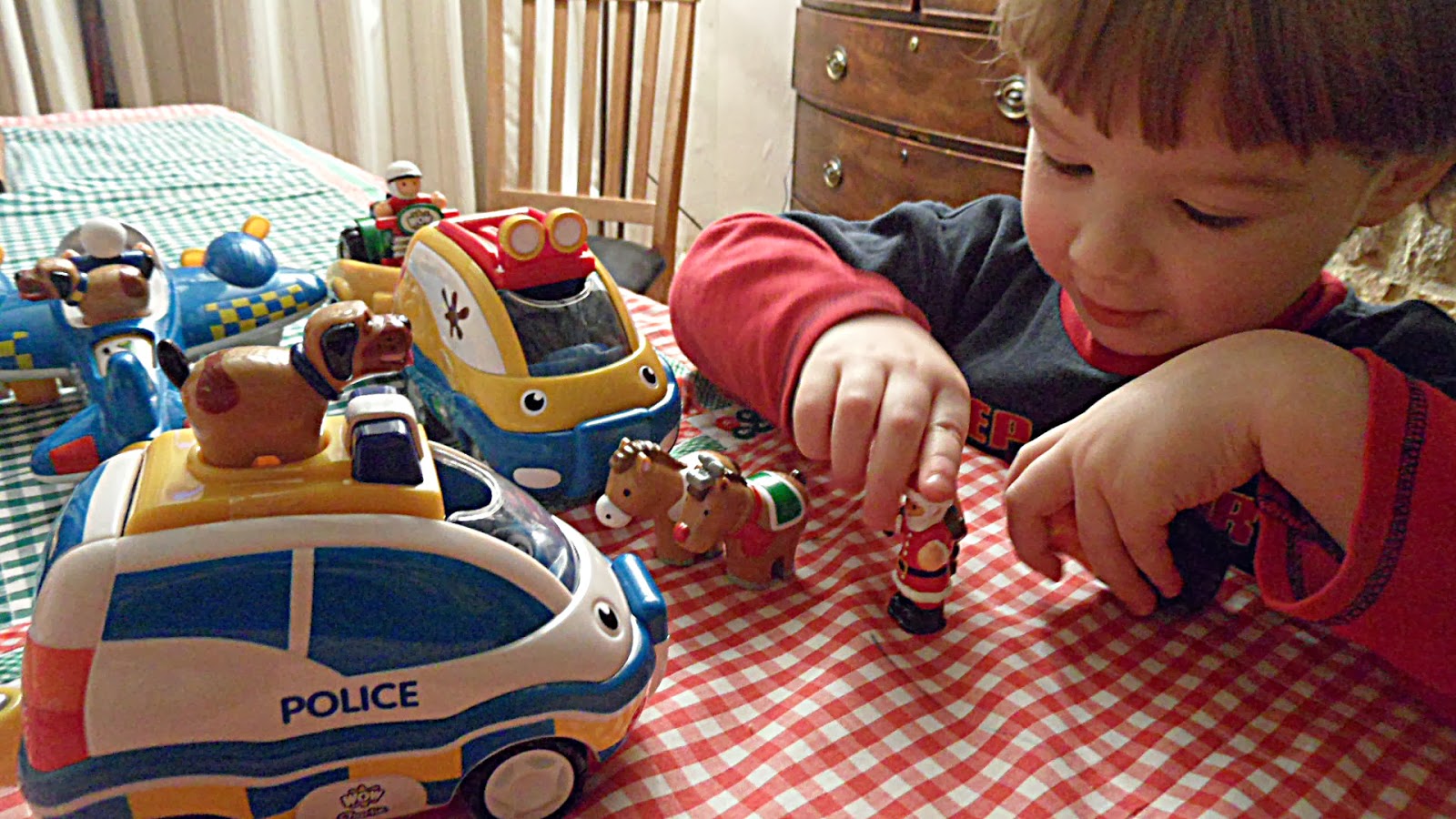 My lucky boy already had a couple of Wow toys from before Christmas, and watching him play with his toys is a pure delight. He is happily engrossed in his imaginary world of little people and vehicles. What I love about this range is the great attention to detail. We mix and match vehicles and figures. It's all about creative play. So Santa Claus might end up driving a police car with a reindeer on a top of the car.


The Emergency Rescue bundle consists of four Wow Toys: Ernie Fire Engine, Police Plane Pete, Robin's Medical Rescue, Police Chase Charlie plus two small packets of figurines.
What is it with boys and their love of fire engines and trucks? Eddie cannot have enough of Fireman Sam's stories on TV and in books, and he loves playing with his Ernie Fire Engine. It comes with a firefighter Jack, sorry, he is Sam now. The ladder goes up and round to help the little firefighter fight the flames. 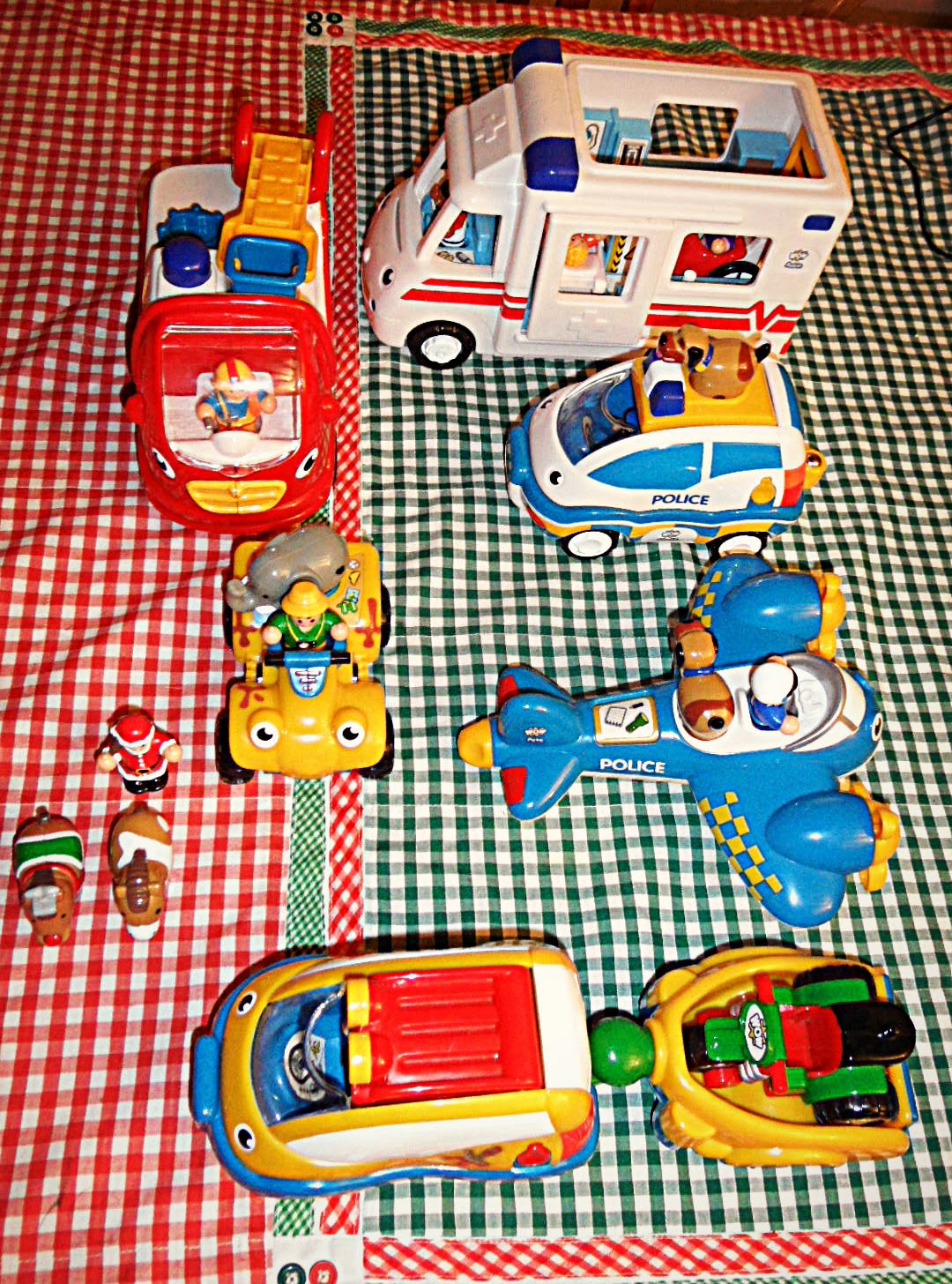 Police Plane Pete (see above) is a motorised police plane with rotating propellers. It comes with a policeman and police dog. If you rotate the tail, you will discover 3 secret compartments.
Eddie was particularly thrilled that Officer Foley has a sandwich and a chocolate bar in his compartment, while Buddy the dog has its own doggie snacks and water.

Police Chase Charlie is another policeman-dog team. Officer Cash and dog Whiskey are on the beat. They are great friends with Officer Foley and Buddy, of course, and by now I'm not sure who is who, where is Buddy and where is Whiskey. 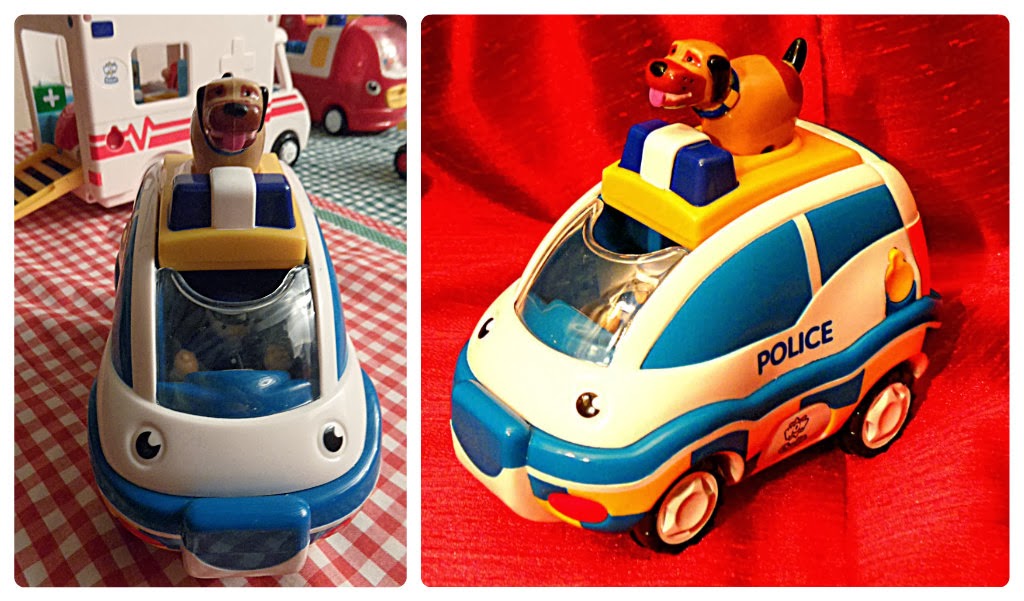 As I mentioned creative play already, Eddie is inventing games with all his vehicles, for example, he says the elephant Elvis is not feeling well because he ate too much, so Sam is taking him in his Rock'n'Ride quad bike (which is not part of the rescue set) to the ambulance to be seen by Nina. He loves the name Elvis and thinks the elephant is named after Elvis in Fireman Sam.

Robin's Medical rescue was the main reason behind buying the whole set of four, as it alone cost over £20. It is a clever set, which consists of an ambulance and a few figures: Nina the paramedic, Sandy who is the boy on a stretcher, and a girl in a wheelchair, who my son insists on calling Ellie after a girl he knows well and who is a wheelchair user. Click on the side door, and the stretcher can be taken out. There is a back door with the ramp, which is released automatically when you push the button. There is also an X-ray machine inside. Isn't it just great?!


When we looked together at the spreadsheet of vehicles, admiring all their bright colours and funny names, Eddie wanted to find out if there was a vehicle called Eddie or Edgar. Sadly, none are called Eddie. I told him maybe one of their new releases will be called after him. 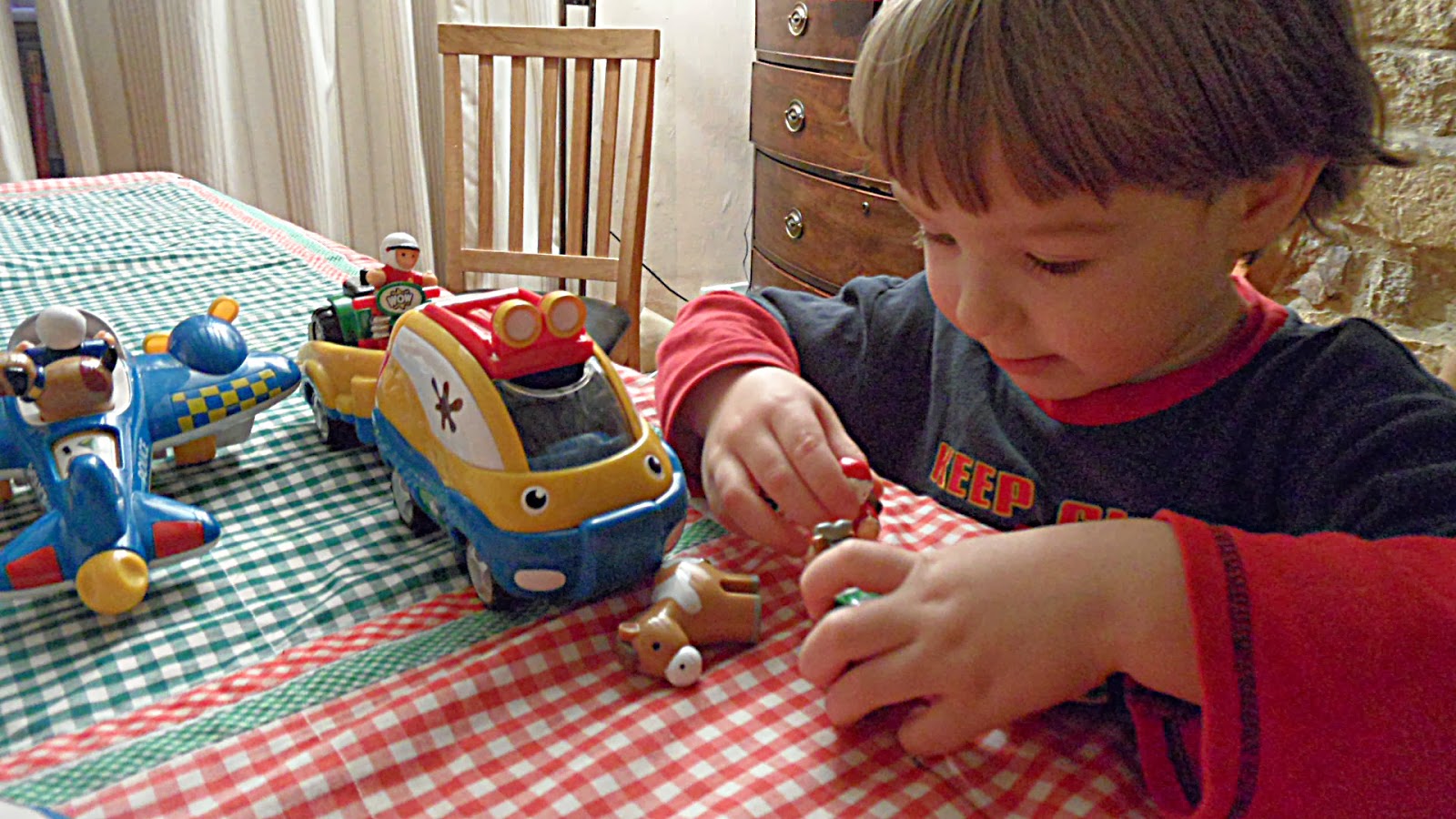 We love Wow Toys. My only criticism is the amount of wires in packaging. It is not easy to undo all the wires, they are tangled so hard, that only an adult would be able to unscramble them. Other than that I cannot find any fault with the toys.
I already know what I am going to buy for Eddie's birthday. 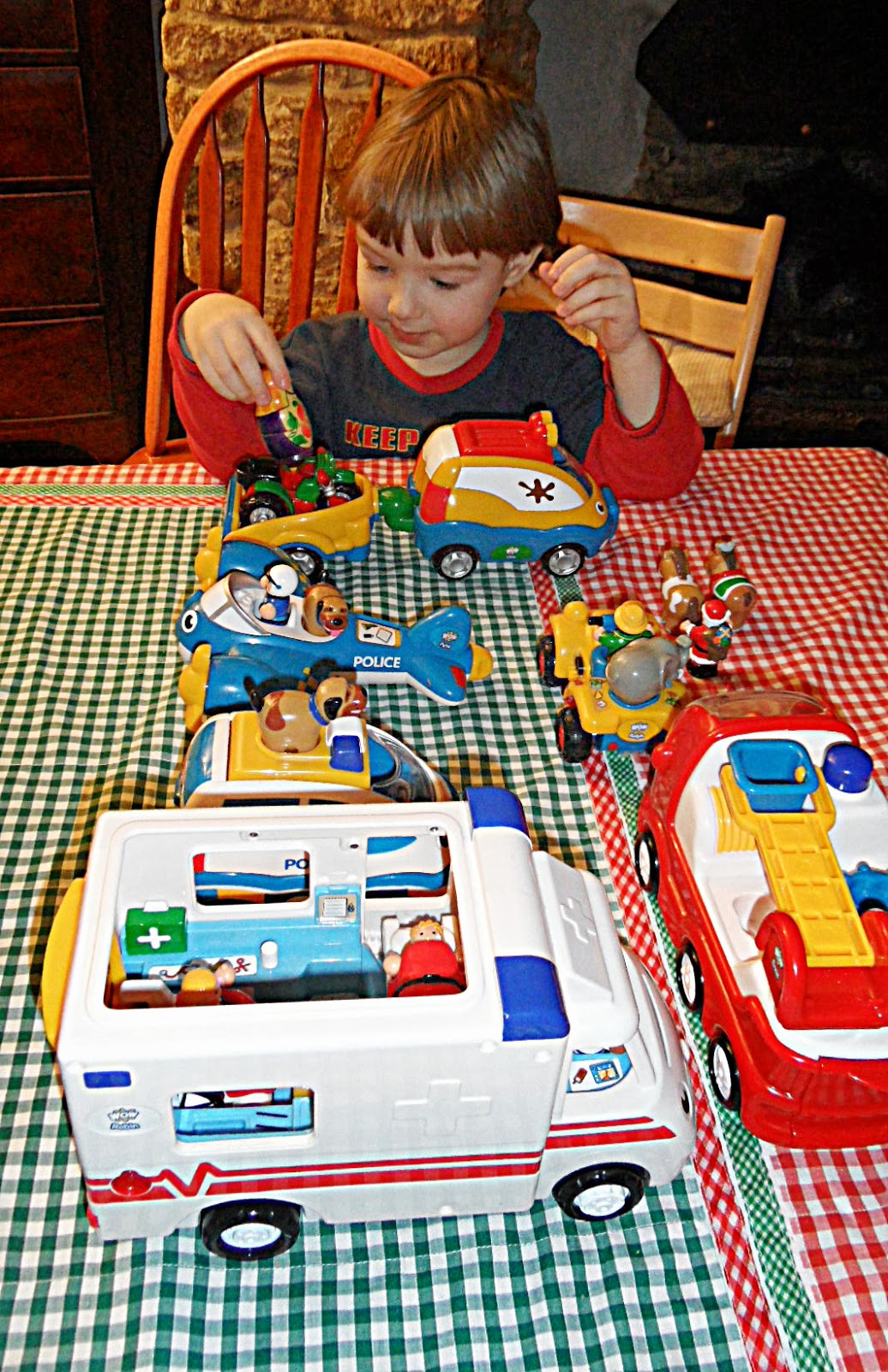