I have known about Pu'er tea and its health benefits, read how it was praised by the celebs for its slimming properties, but as I am never swayed by anything endorsed by the celebs, I didn't buy it until recently. I have also bookmarked The Observer's recipe for the eggs pickled in Pu-er tea. It was a funny story told by my Mum that inspired me to get a box of Organic Skinny Dragon Pu-er Tea from Dragonfly Tea and a box of Pu'er from Whittards. 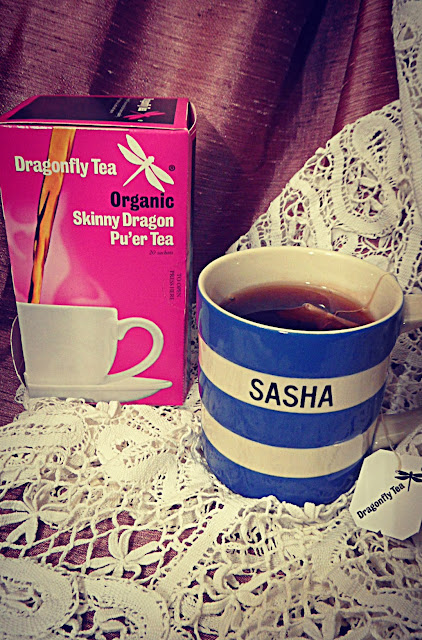 My older niece is learning the basics of the Chinese wushu sport, and sometimes my Mum accompanies her to the class. During one of the recent visits, the coach offered my Mum a cup of Pu'er and told her how amazing this tea was for the digestive system. My Mum and niece sniffed their cups suspiciously, as the tea was very smelly. In fact it smelt just like shrimps. Mum has politely finished her cup, and when the coach was offering a cup to another grandma, my niece, changed her cup with Mum's, so Mum had to drink the 2nd cup without actually enjoying it at all. Then the coach returned, saw her empty cup, asked her "So did you enjoy it?" and before she even replied, had refilled her cup. Poor Mum had to drink her 3rd cup. We talked on the phone the next day after this story happened, and Mum confessed that though she didn't like the flavour at all, she felt really well afterwards, and she decided that she would buy this tea for its medicinal properties.

As I am on a 5:2 diet this month, I decided it would be nice to combine my fasting with the slimming tea on non-fasting days.
What did I think?
The very first cup? I found it quite peculiar, with a very strong whiff of fishy or shrimpy odour. I didn't think I'd be able to finish the box of tea. This is really the case of the acquired taste.
But I persevered. Next day I added a slice of lemon to disguise the smell, and having it for a week or so, I actually started to enjoy it, and it does help with digestion.
I have almost finished my first box, and plan to buy another one.

Dragonfly Tea site is very enthusiastic about its Skinny Dragon tea:
"Hardly known outside Asia until now, Pu'er has been greatly prized since the Tang Dynasty, over a thousand years ago." Well, that sounds enticing to me.
"It is valued for its intriguing, full bodied, earthy, slightly sweet flavour, as well as its reputed health benefits"
Now that I have been drinking it for a couple of weeks, I can read "intriguing" as a euphemism for weird.
"Pu'er is particularly appreciated in China after a heavy meal and has been revealed by Victoria Beckham as one of her Slimming Secrets." That piece of information would have actually discouraged me if I read about it before buying my tea, as Mrs Beckham is by no means my health or style guru.

I like the colour of Skinny Dragon, a very rich dark tea, and it has a very earthy taste indeed. I'm glad I have overcome my first impressions and learnt to appreciate it being different from my usual teas.
As for the slimming results, that is yet to be seen, but even if it does nothing to my waistline, it certainly improves my digestion. 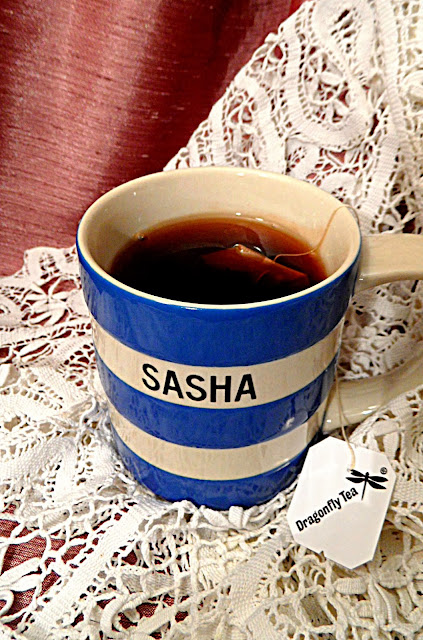 Have you tried this tea? What did you think?

June 2014 update: Since then I have been drinking this tea quite regularly, almost every day.