Duck with red cabbage: our last meal of 2013

After the lavish Christmas lunch our new year's eve's dinner looked very modest in comparison, but I was feeling absolutely rotten and had no energy to cook a three-course meal. We didn't have guests either. We didn't celebrate, my guys went to bed rather early and didn't stay until midnight to greet 2014. I kept reading until 12am, listened to some boom-boom of the nearby fireworks and then decided it was time for me to join my sleeping army as well.

For the last meal of 2013 I have picked Nigel Slater's recipe for Red Cabbage with Prunes and Port. It was a starting point for my dish of Duck with red cabbage.
I went to Waitrose with the very good intentions of buying a jar of duck confit needed for his recipe, but after looking at the price (£10.99), I decided against it, as the fresh duck legs would cost less than a half of that, and I still had some duck fat left in a jar from Christmas. 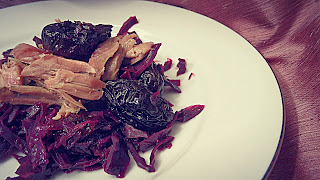 Put the prunes in a small bowl and pour the port over, enough to cover the prunes, let them soak for an hour. I didn't stone the prunes.
Put the duck legs in a roasting dish, slightly smear with 1tbsp of duck fat, season well and put the tray in the oven preheated to 200C. Roast until the skin is crispy and the duck is cooked well (none of that pink nonsense please). Squeeze some lemon juice and add a dash of sherry if you want mid-way through cooking.
Put the finely shredded red cabbage in a deep frying pan or wok with 1tbsp of duck fat and add the juniper berries, add a bit of water, cover with the lid and cook for at least 30 minutes.
Nigel Slater's timing of cooking the red cabbage is much shorter, but while I love fresh crunchy cabbage in slaws and salads, it has to be cooked well in a dish like this in my opinion. Keep checking the cabbage, and adding a bit more water if necessary. Add the cranberry sauce and jelly (we had the remains from Christmas). Add the prunes and port as well, mix well. The cabbage should be soft, not crunchy, but not overcooked to the point when it is disintegrating.
Shred the duck meat, add to the cabbage and serve while hot. 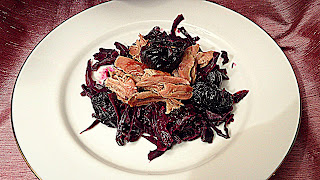 It was a lovely combination of flavours and textures. Duck was nicely complemented by the sweet prunes and cabbage, the port added the richness to the final dish, so all in all, a very satisfactory meal, albeit not exactly as Nigel Slater planned when he wrote his recipe. 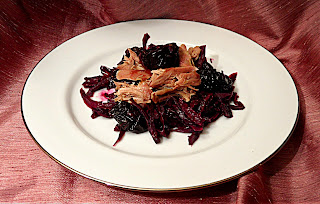 And if you wonder what our first meal of 2014 was, I'll tell you: we had pancakes. What about you?