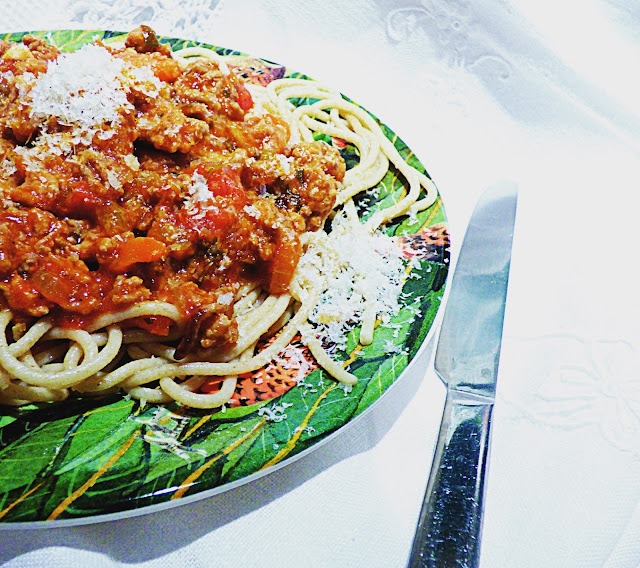 Spaghetti Bolognese is one of the most popular dishes, and there are lots of different variations of the original ragu recipe. Last March Mary Berry caused a SpagBolGate on social media, as she added white wine and double cream to her Bolognese pasta. I didn't watch the TV programme, but there was no escape from the indignant hullabaloo online and in the papers the next day. As if she has committed a culinary crime of the century.
Of course, the Italians never serve Ragú Bolognese with spaghetti anyway.

Amused by all the commotion, I decided to do a little research and check my collection of cook books, to find out which recipes for Ragù Bolognese they offer.

The Oxford Companion to Food, the food bible written by food historian and author Alan Davidson has an entry on Ragù:
"Ragù - the true name for the Bolognese sauce which has acquired international currency, especially in Spaghetti alla Bolognese. In Bologna, the home of this sauce, it was first used for a baked pie of lasagne, not as the sauce for spaghetti or other pasta... The original sauce was made without benefit of the meat mincer, and the meat was chopped into smallish chunks. Nor did it contain tomato, which didn't arrive in Italy from America until later, and even then was only grudgingly accepted; even now a correct ragù bolognese has only a light tomato flavour.
The principal ingredient is always minced meat, usually beef, cooked with chicken livers, unsmoked bacon, onion, celery, tomato puree, and wine. Debased forms of the sauce are frequently met; these lack the subtlety and roundness of flavour which characterize the authentic versions".

The expression "debased forms" has left me in stitches, but yes, what most people here know as Spaghetti Bolognese could be easily described as such by the purists.

Biba Caggiano in Biba's Taste of Italy offers a recipe for Tagliatelle with Bolognese Ragu - she uses a mix of minced pancetta, ground beef chuck and ground pork loin. As for wine, she goes for medium-bodied red wine, such as Chianti Classico. Plus whole milk.

Sonia Peronaci of the Giallo Zafferano fame cooks her Ragù with a mix of ground beef and pork, as well as pancetta, adding red wine and whole milk.

The Chiappa Sisters who wrote Simply Italian have borrowed their recipe from chef Anna Maria. Her secret is to let the ragu simmer for 3 hours and never use tinned tomatoes. They use pancetta with beef mince, a glass of red wine and no dairy except the parmesan to serve it with.

Julia Della Croce in Italian Comfort Food, on the other hand, uses tinned tomatoes. There is minced beef, dry white wine and milk in her recipe too.

As you can see, there is not consensus even among the Italian cooks. 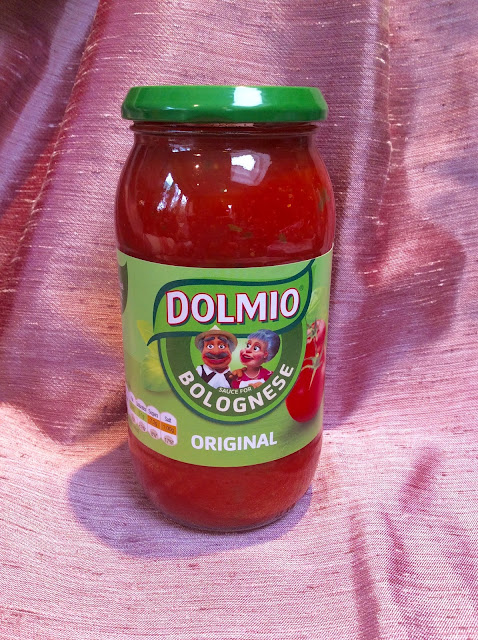 What goes into a jar of Dolmio Bolognese sauce? It is 100% natural, contains no artificial colours, flavours, preservatives or sweeteners. In each jar, you will find at least 10 juicy diced tomatoes, some tomato puree, half an onion, sunflower oil, garlic, a handful of herbs, a teaspoon of cornflour, a teaspoon of salt, a pinch of pepper, two teaspoons of beet sugar for taste, a squeeze of lemon juice, a splash of water and nothing more.
In fact, a jar provides a family of four with one of their 5-a-day makin a great mid-week meal option for the whole family.

All participating bloggers were provided with ingredients to make several meals including either a meat-based or vegetarian version of Spaghetti Bolognese. 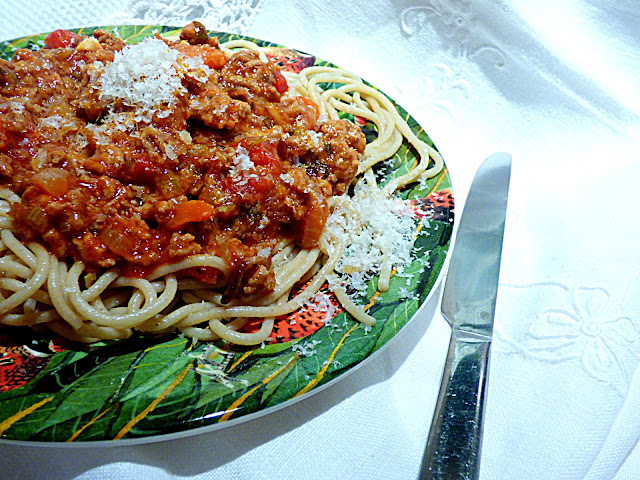 Typically I use red wine as well as tinned tomatoes, but as the cooking challenge was set up by BritMums and Dolmio, I used a jar of Dolmio Bolognese sauce.
Since it is already made, I didn't need to simmer it for long, as I would do if I cooked a tinned tomato-based sauce. Thumbs up for the ease and convenience, that is definitely a useful kitchen staple to have for mid-week meals, when you don't want to spend hours stirring sauce in the kitchen.
I decided to experiment and add white wine to the sauce. I don't add chicken livers, as my family don't like it.

Cook spaghetti al dente in the boiling salted water. Drain the pasta and serve with the ragu.
Grate a bit of parmesan or Grana Padano on top if you fancy it. 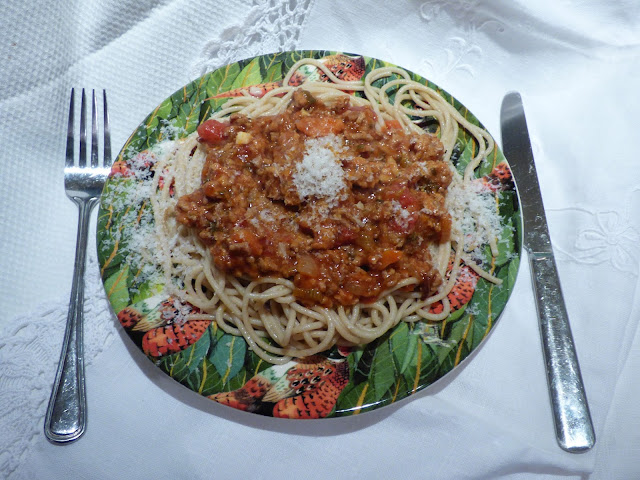 As the food delivery had enough ingredients for several meals, I used the second jar of Dolmio to cook a one-pot baked chicken.
How do you cook your spaghetti Bolognese? 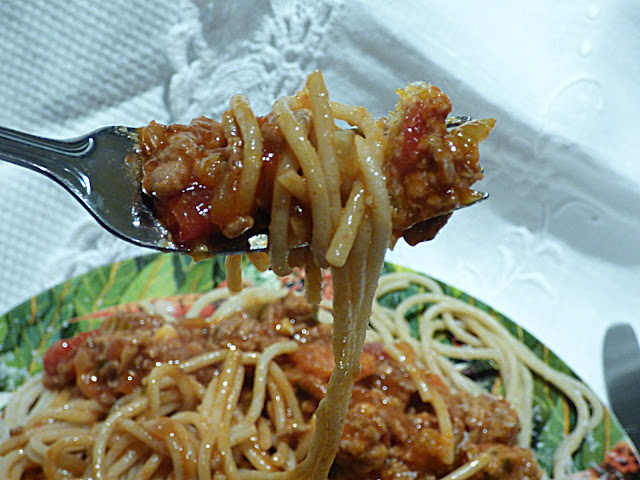 Check out what my blogging buddies Alison from Dragons and Fairy Dust and Cheryl from Madhouse Family Reviews cooked for the challenge (just click on the links, they'll take you straight to recipes).
Midweek Challenge with Dolmio
and
Bolognese rice two ways

Disclosure: We received ingredients courtesy of Dolmio to cook this meal.

This post is an entry for the #Dolmio #ThankGoodness Challenge, sponsored by Dolmio www.dolmio.co.uk/thankgoodness
Posted by Galina Varese at 18:27:00