I should have probably called my blog post "Running after Sasha", as it is closer to truth. Sasha's happiest moments are when he runs along the beach, like a seaside Forrest Gump. He is feeling free: free of conventions, restrictions, his own worries, fears and limitations, free of frustration and angst, all the anxieties evaporate, he is enjoying every second and doesn't care whether we follow or not. 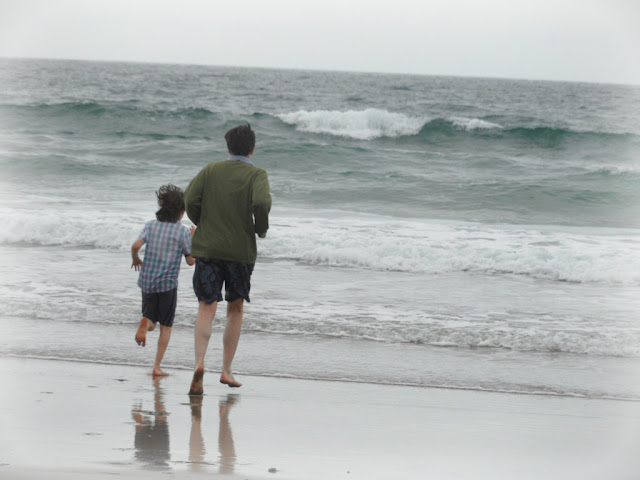 Years ago I created a scrapbook layout called "Define Me" for one of the Autism Awareness campaigns. I have taken my old scrapbook out the other day and looked at it. What I said about Sasha then, still applies these days. If I were to define my son, I would use the same words: beautiful, brave, simple, complicated, kind, impatient, giggly, frustrated, not talking (or non verbal) and loving. Yes, these words describe my son to a T. I would also add such words as vulnerable, quick-tempered, anxious, affectionate and a gentle soul.

When Sasha was born on a cold March day in 2002, I thought the hardest part was over. I had a very exhausting 36-hours-long labour without much of a progress, and as my child was showing the signs of distress, I had an emergency c-section. Finally holding him in my arms, I imagined that from now on everything would be fine. And why wouldn't it?
Sasha was a bouncy baby who reached all his milestones in time. He started talking quite early, saying Mama before he was six months old. Social, chatty, loving company and full of beans, Sasha's personality was shining through. I was worried about the possible side effects of the multiple vaccinations, but when we discussed our fears with the pediatrician (we lived in the States at that time), he was reassuring us, saying that there was no way Sasha had any signs of autism, that he had a perfect eye contact and that we shouldn't even hesitate about vaccinating our son. We postponed the vaccinations, but as we were due to go back to the UK, the doctors finally convinced us that it would be in Sasha's interests to have all the jabs done before we left.
For years afterwards I wished I could turn the clocks back to that moment and listen to my own heart. Sasha was very poorly after the vaccinations (there were 4 jabs with 9 vaccines in total, a killer combination). I cannot say that he started to regress immediately, but after that something has changed. First he stopped acquiring new words. The health visitor and Co were all reassuring us: he is a boy, boys tend to develop speech later. Then it was the speech therapist version: "You are a multi-lingual family, you confuse your child with your different languages. Stick to just good old plain English. In time he would start speaking all the languages." Friends joked:" Einstein was a late talker too, and his Mum must have been worried as well". But it wasn't just about acquiring new words, he was losing the vocabularly he had, slowly regressing into simple vocalising without any meaninful words. At the age of ten and a half, Sasha is completely non verbal. I haven't lost hope that he would speak one day, but I have also prepared myself to the scenario that he might never speak again.

When Sasha was 3, we went through a week of developmental and behavioural assessment at the local hospital. After a week of talks to the speech therapist, child psychologist, pediatrician and many more specialists, there was no conclusive diagnosis. They said Sasha was moving in and out of the autistic spectrum, and that we should return in a year's time. Somehow having no diagnosis felt reassuring to me. I thought surely if he had autism, they would have told us so. A year later, they did find that Sasha's condition was indeed autistic spectrum (though they used the term quite cautiously). They thought we would need a diagnosis to help getting Sasha statemented.

My world collapsed at that point. Not my child surely. They must have made a terrible mistake. Just look at my boy, he's so loving and affectionate. I never had a problem with Sasha's eye contact, he always responded to me and his father. It hit me hard. There were days when I didn't have a will to live. I would walk in the Blenheim park, and at times looking at the murky waters below the bridge, thought how easy it would be to stop my anxiety and pain. I was truly depressed. Only the thought that my husband wouldn't be able to cope on his own, looking after Sasha, and that Sasha would end up in an institution stopped me from doing anything drastic. I went to see the GP and asked for help.

Everything is so slow in the NHS. The referral was sent, and I had to wait for more than six months to see the counsellor. Overall, I had six sessions. Did they help? To some extent, but by then the worst depression was over, as I tried to help my son, who was finding it very difficult to settle in the local nursery.
It was a standard nursery for children without any problems. The staff were kind but not trained in working with chidren with special needs. Parents were mostly aloof and would hardly say Hi at the gate, probably worried that our son's condition was contagious somehow. I know I felt like screaming at times: It is autism, not a plague.
We lived in a small town of Woodstock, and having a child with a disability made us feel like outsiders.
Finally Sasha got a place at the nursery in the special needs school in Witney, and he had to commute by the school bus. We decided it was best to move closer to school. I don't regret this decision. Moving from a posh little place with the mostly white anglo-saxon population to a more diverse and bigger place was a good move. Having a special needs school in town makes a difference.. You can often see people of all ages with special needs who are walking in town, accompanied by carers, and these people (or as we call them "our people") are assimilated and accepted by the locals. 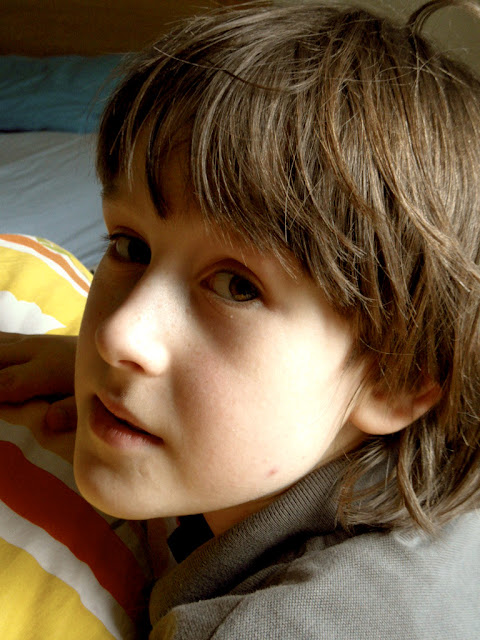 Now that Sasha is 10, he is more aware of his condition and of what he is not able to do. When his younger brother is talking, Sasha is torn between feeling frustrated at his own inability to talk and annoyed with his brother for being able to say things. At times I could almost see a pride in his eyes at his younger brother's achievements. In the rare moments of affection he kisses Eddie on the head, which brings Eddie to the point of near-ecstasy, because Eddie worships his big brother.

Life is certainly more difficult now, and I am waiting with trepidation the time when Sasha becomes a teenager. Being a teenager is not easy even when you are a neuro typical person. When you have a disability, it is tenfold harder.

Nights. Who invented them?! Autism often comes accompanied by a sleeping disorder. Sasha would wake up at 3am, and then none of us could get any sleep. The nights could turn into the noisy jumping on the bed and door-slamming, loud humming and stimming.

When my husband is away, I do not dare to venture out with both of my boys. I am not able to run after Sasha in case he bolts away from me, while dragging Eddie along.

Holidays are always tough. Our extended families live too far to help.
We have the local charity Guideposts running play activity days during holidays, but with all the budget cuts they do not have enough money to offer places to everyone who applies. Last summer from the 25 days that I requested, we have been allocated just 11 days. The demand is much higher than supply.

Sasha was born in 2002, the same year as Mr Cameron's son Ivan. David Cameron who is our local MP was at the opening of Sasha's school, and when he became a Prime Minister, I was hoping he would be more understanding towards people with special needs and disabilities.
We are just an ordinary couple, not high profile. We don't have extra help with nannies. Budget cuts to disability services affect us big time.

As for the future, let's say it is quite bleak. Once my husband and I are too old or incapacitated to look after our son, he will end up in the institution. Or maybe in the street? Who knows what will happen with the social care budgets?


This post has been written to support The Very Special Children of 2002 campaign. You can read more about it here. I have accentuated the difficulties we encounter to show the Prime Minister how the ordinary families with children who have special needs live.

I also want to add that Sasha is very much the centre of our Universe and that we love him unconditionally. He is a wonderful boy who has taught us many things about ourselves and the world around.

Email ThisBlogThis!Share to TwitterShare to FacebookShare to Pinterest
Labels: autism