My blogs readers might remember my post on Philips Fresh Cooks party which took place at the end of September. For several weeks I have been testing Philips Jamie Oliver HomeCooker and Cutting Tower. 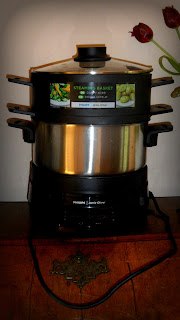 What Philips promise: "Enabling you to prepare homemade meals even on your busiest days, the HomeCooker has been specially designed to achieve authentic home cooking with ease. It can chop, stir, steam and sauté and be left cooking unattended".

As Jamie Oliver explains: "We all know it can be a struggle to get fresh, homemade food on the table every day, especially for busy parents who have to juggle so much. It's often a real tradeoff between spending time with the family and getting fresh food on the table. The beauty of the Philips HomeCooker is that it removes this dilemma - you can now do both! Whether you're a beginner cook or a more experienced chef, the HomeCooker takes the pressure off in the kitchen. Because it stirs itself you don't have to stand over a stove but you can still invest all that love and creativity into your meal."

What were my first impressions? HomeCooker looks very solid and pretty big. As one of my party guests made a joke "It would take half of my kitchen". It does indeed need space, so perhaps not an ideal gadget for a small kitchen. I cannot imagine using it in the kitchen of our apartment in Woodstock, for example, there would have been no space for it, with the kettle, toaster and coffee machine taking almost all the space. Now that I have a relatively big kitchen, it is not a problem.

Unpacking and setting it up was quite a straightforward process.

One of the first dishes I chose to prepare with HomeCooker was a Butternut squash risotto with the crispy pancetta and sage. For that dish alone the HomeCooker justified itself to me. The risotto was perfectly al dente and delicious.

However, unlike the slow cooker, where you chuck everything in and go to work to come home to a hot meal, I had to spend a lot of time around the gadget. First of all, I had to chop and roast the butternut. Then, following the instructions, I chopped the onions and celery, I didn't use the Cutting tower as suggested, because I don't add the crescents of onion slices to risotto, I prefer it to be finely chopped. Then you set the cooker for 10 minutes to soften the veg, then reset a few times more, after adding the risotto rice. So, everything was cooked in stages, and I spent almost all the time in the kitchen apart from twenty minutes when the risotto rice was being cooked. Plus you needed to fry the pancetta and sage leaves separately. So, if you are looking for a recipe which is not time-consuming, then this is not the right recipe for you. Saying that, we loved the risotto. I also appreciate the fact that all the stirring work has been done by the cooker. 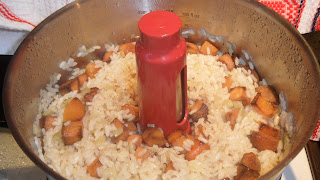 Risotto wasn't the only recipe in the booklet which involved cooking in stages. However, cooking risotto just right is not an easy task, it has to be al dente but not at the stage when it is still uncooked, it needs a bite combined with the overall creaminess. This recipe scores 10 out of 10 for the taste alone. And it looked very appealing too (see the photo below). 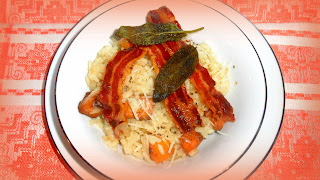 Crispy rosemary potatoes would have ended in disaster if I followed the recipe precisely. I think that the timing and temperatures for this recipe are not properly tested. I would never cook potatoes at 250C for 70 minutes, or they would end as the coal pieces. When I read the recipe, I thought I'd set the timer for half an hour just to see how well cooked it would be. The aroma was lovely, thanks to the garlic. But all the crispy bits were getting stuck to the bottom of the pan, and the potatoes were getting smaller and smaller in size. In the end I took them out of the pan, placed in the ceramic dish and put in the hot oven to make them crispy. Don't think that was the idea. 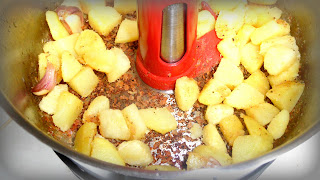 And the pan was one hell of a job to clean, as you can see from the photo. Not exactly time-saving if I had to soak the pan and then scrub it until it is clean again.
Let's say, I wasn't impressed with the recipe, but was going to give it another chance. 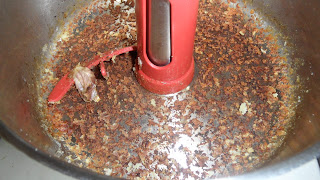 This time I cooked the potatoes with mushrooms and garlic. Again, the same problem, the crispy bits were getting stuck to the bottom. Plus if you put a lid on, the potatoes are more steamed than roasted. There is no mention in the recipe whether you are supposed to have the lid on or off. 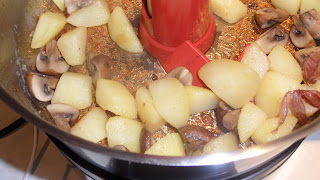 I do not give up easily, I wanted to figure out how to use the cooker to do the potatoes. I decided not to chop potatoes, but cook the baby potatoes in skins. 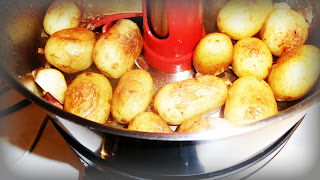 I have solved the problem of the sticky pan. But the potatoes were still not perfectly crispy. They were roasted on one side and steamed at the top, because I had the lid on. They tasted nice enough, and the garlic cloves were very soft and creamy. I have used the HomeCooker several times to prepare veg to add to pasta, or make a side dish. 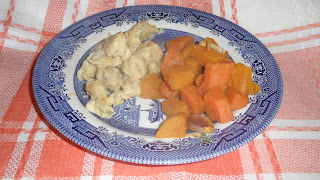 If you play with the settings and try different temperatures, then it is a convenient pan to cook the vegetables like squash and sweet potatoes. They won't be crispy, but they will be cooked well.

Yet another recipe that I tried recently was Slow-cooked Hungarian Beef Goulash.
I didn't cook it for suggested 230 minutes, it was cooked in less time than that, and was very tasty. 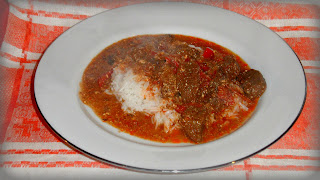 I think that Jamie Oliver HomeCooker is definitely a welcome addition to my kitchen gadgets, but the recipes in the booklet should have been tested better for the timer and temperature settings.