Jamie Oliver Cutting Tower comes as a product to use alongside Philips Jamie Oliver HomeCooker, but it can also be used separately, as a standalone gadget.
It promises to "give you an extra pair of hands in the kitchen".
The Cutting Tower is meant to stand by the side of the Philips HomeCooker and drop its chopped or sliced contents straight into the steel bowl.
It comes with five attachments or blades, two of which slice (fine and coarse versions), two do the shredding job (fine or coarse) and one is for cutting julienne.
The Tower offers two speed settings. 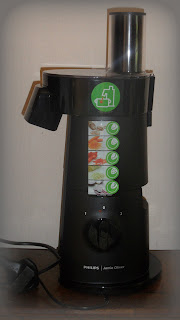 The image below shows you two different varieties of sliced peppers (two different blades were used to show how they work). While perfect for salads, it wasn't the size I would typically use in my cooking. The sliced pieces were not exactly uniform either. It was a bit of a mismatch in size and shape. 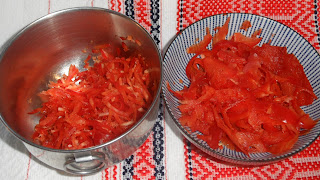 Next I picked an onion (who likes this ungrateful job of cutting the onions?). I have chosen the blade that was meant for the onion. Was I satisfied with the job?
Yes and No. Depending on what dish you choose to cook. When I was cooking the risotto, for example, I didn't use the Cutting Tower, as I prefer a finely chopped onion for the risotto. I guess this might be the right size/shape for cooking the Chinese dishes.
About one fourth of the onion was left unchopped and lying squashed on top of the cutting blade.

Moving on to the carrots. A failure in my opinion. Just look at the pieces. While the carrot was standing, the slices appeared round, then the remaining piece of the carrot fell sideways, and the tower chopped it into long strips. So, it was neither here nor there. Maybe if you make soup and will blitz it later, it doesn't really matter, but I didn't think it was meant to look like that. 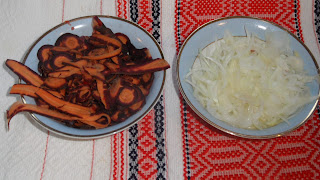 And that's what I found with the vegetables most of the time, there were leftovers in the tower that didn't get down through the blade, or got stuck. Then I had to stop the gadget, take the pieces apart and remove the bits and bobs by hand.
If you need to slice and chop just one vegetable, I'd say, it is faster to do it by hand.
Once you assembled the tower, sliced, then disassembled and washed it, it is not exactly a timesaver.
I think if you are cooking for a big family and need lots of vegetables sliced, then this gadget will make it more worthwhile.
It is great for preparing a coleslaw, or any cabbage dish, as I have discovered. 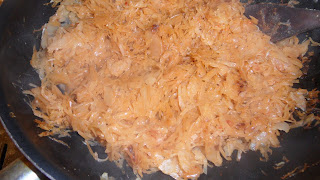 The suggested retail price for this gadget is £100, which is quite pricey for what you get. I received it for free for my Philips Fresh Cooks party, and though I am grateful for the opportunity, I think if I had to buy it, I wouldn't want to pay as much.
I am going to use it but not as often as Jamie Oliver HomeCooker.