The Book People know their target audience and keep sending me booklets about their promotions. As their prices on cook books are often much better than on Amazon, I tend to buy a cook book or two (or three or four) every time I place an order. Then I have to hide my cook books around the house, pretending they have already been there.

When Chris from Cooking Around the World announced a new cooking challenge, he decided to start with Germany. I must confess I don't know much about the German cuisine. And conveniently enough I recently bought a book called "The illustrated food and cooking of Poland, Russia and Eastern Europe" (ed. Lesley Chamberlain).
I mainly bought it to have a look at the Russian recipes, and to be honest, there are so many inaccuracies regarding the Russian food, that I slightly doubt the authenticity of the rest of the recipes featured in it, but that's the only book I have which boasts a big selection of the German recipes.

Cod in mustard sauce looked rather appealing, so off I went to the shops in search of a nice piece of cod. I bought a big fillet (enough for two). 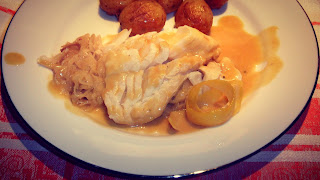 First slice the onions and fennel bulb thinly (I have used the Cutting Tower from Philips), then pan fry them in the olive oil for about 10 minutes, stirring so that they don't get burnt. Add a dash of white wine if you like (I did). The original recipe didn't list fennel, but I like the taste of fennel in fish dishes, and I also had a fennel bulb which needed to be cooked.
Cut a big fish fillet in two and place on top of the fennel/onion mix in the pan. Cut the thin strips of lemon rind, place on top of the cod fillets, squeeze the lemon juice over the fish. Add the bay leaf, allspice, clove and peppercorn
Add two mugs of water to the pan and slowly bring to the boil, cook on low for 10-15 minutes. Move the pan aside, and using a ladle, get about one mug of liquid from the pan. Cover the pan with the fish to keep it warm.
In a small pan melt the butter, add the onion/fennel/fish liquid. Boil until reduced and thickened, add two tablespoons of mustard this will be the sauce for the fish. 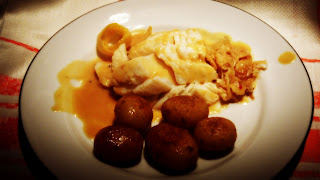