If you're dreading the arrival of in-laws and the army of grumpy old aunts for Christmas lunch and don't find advice from the Domestic Goddess-types particularly inspiring, you might want to read an amusing cookery-cum-anecdotes book called Oh Come All Ye Tasteful: The Foodie's Guide to Millionaire's Christmas Feast by Ian Flitcroft. It has been recently published by Legend Times Group.
In the introduction Flitcroft proposes his "cunning plan" to awe the motley collection of relatives with an extravagant feast. "Since you're stuck with your family, the only solution is to become creative when it comes to what is served up. So fear not, this book will help you create a Christmas dinner that is so wildly impressive that even the most curmudgeonly great aunt will swoon" 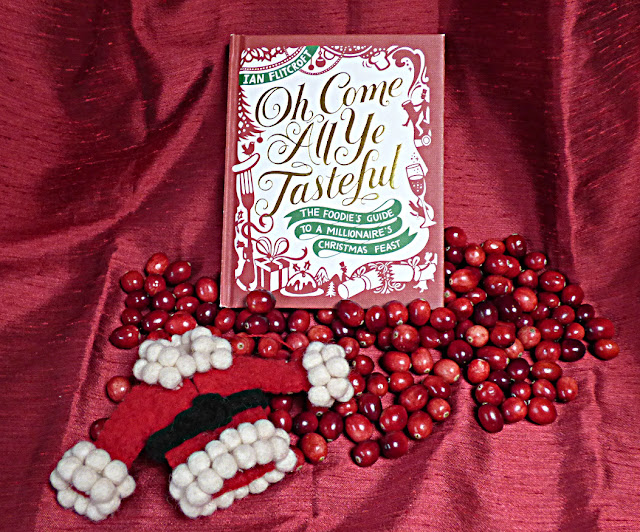 The style of the book is a mix of food history, anecdotes and recipes. Ian Flintcroft's background is very interesting, he studied medicine at Oxford and did a DPhil in neuropsychology. It's during those years that he started developing a great interest in all things culinary. He has travelled a lot, and is a long-term member of the Slow Food Movement in Ireland, so his foodie credentials are impressive.
The book is interspersed with food history facts and literary quotes to keep you entertained.

I have read it more as a fictional account than an actual cooking book. As much as I love champagne, I don't plan to spend £150-£1000 and more on a bottle (and I wouldn't invite Puff Daddy or Jay-Z. Not that they would consider being invited to our house in a million years either).
Let's just say many food suggestions in this book are not for the austerity times. I do spend an arm and a leg at Christmas time, but reading this book often made me feel like a grumpy old woman, as I mentally said No to many arguments like reading "What would Christmas be without a trip to London and Harrods?" - Actually, Christmas could be absolutely fine and dandy without a trip to Harrods, or even London altogether.

I appreciate that many recipes in the book are just pure fiction and are not meant to be created in real life, but what if someone doesn't see the irony and takes it at a face value?
For example, 4 pounds of black Perigord truffles for one turkey is clearly a joke. The taste will be totally ruined. Even if you are a millionaire and have stupid amounts of money to spend on truffles, that is not going to work. Even a few shavings of a truffle would suffice to change the flavour.
Roti sans Pareil reads like an introduction to an aviary: there is a bustard, a turkey, a goose, a pheasant, a chicken, a duck, a guinea fowl, a teal duck, a woodcock, a partridge, a plover, a lapwing, a quail, a thrush, a lark, an ortolan and a garden warbler. And if you cannot find all these "delicacies" locally, just go and buy the True Love Roast for £670. Apparently, a bargain as it includes a free delivery and will feed over 100 people. Thanks, but No.

I don't want to cook my roast potatoes with a gold leaf either.
As much as I'd be curious to try a glass of Massandra from Tsar Nicholas's vineyards, I know I wouldn't spend that money even if I won the lottery.
The tag price doesn't mean the taste is extraordinary. There are most likely people like the celebrities or new Russians known for buying the old mansions only to install jacuzzi baths in the hall who think that if they spend a fortune on food, it will be exceptional. But sometimes it's the simple ingredients cooked with a creative flair that could win any food competition. It's not all about the price tag anyway.

So, enjoy this book as a gastronomical foraging into the world of expensive tastes, but do your own thing and don't worry about serving your old aunt a bottle of J Nismes-Delclou 1918 Armagnac at £1150 per bottle. She might be happier with a bog standard sherry.

I have looked at the recipes, and there are a couple that I'd be happy to cook, for example, Blinis a la Escoffier (it's an interesting version of blini) or a Duck egg custard with amaretto. 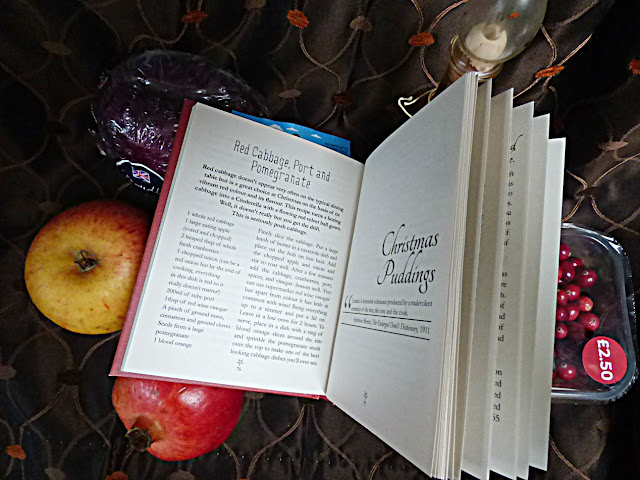 So far I tried the least expensive recipe in the book, for Red Cabbage, Port and Pomegranate.
I do love red cabbage, but don't cook it often. I will definitely make some for our Christmas meal. 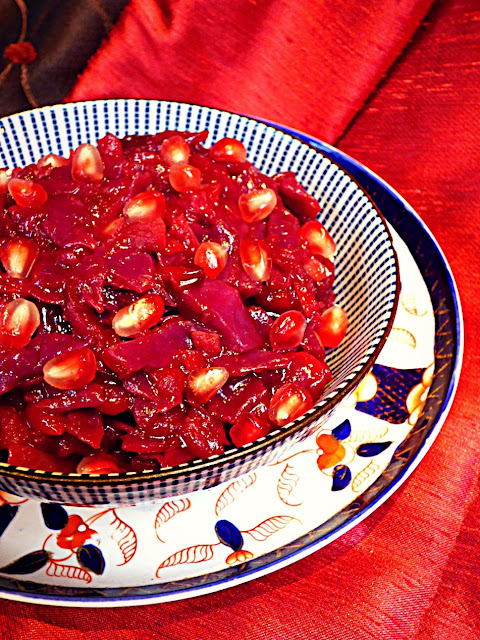 I skipped a blood orange altogether, as they are out of season at the moment, and changed some quantities. As it was a test recipe, I have picked the smallest possible cabbage. Mace was swapped for a bit of ginger.
Finely slice the cabbage. Put a large knob of butter in a casserole dish and place on the hob on low heat. Add the chopped apple and onion and stir to coat well. After a few minutes add the cabbage, cranberries, port, spices and vinegar. Season well.
Bring everything up to  a simmer and put a lid on. Leave in a low oven for 2 hours.
I have slightly changed the step-by-step instructions, as I have fried the apple in a frying pan and added to the cabbage mix much later, perhaps in the last 20 minutes of cooking, as I like to actually see apple pieces. In 2 hours, they would disintegrate into a puree.
To serve, place in a dish with blood orange slices around the rim and sprinkle the pomegranate seeds over the top to make one of the best looking cabbage dishes you'll ever see.

The pairing of red cabbage with apples is a classic one. But the addition of pomegranate seeds is a new touch, and this combination works really well. 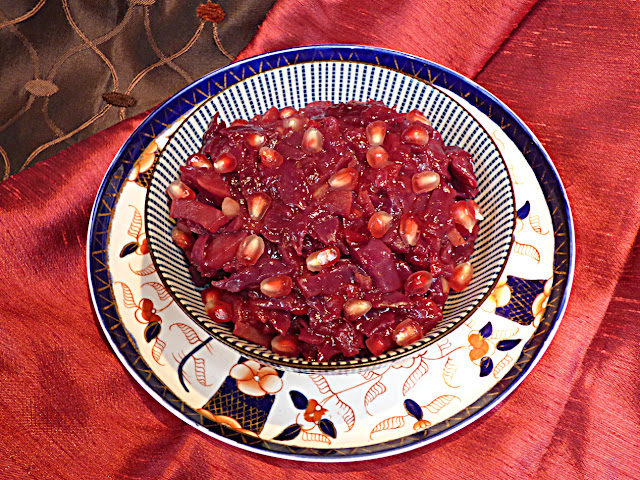 Don't know about the millionaires, but I enjoyed this dish.

Have fun reading this quirky amusing book, adapt the recipes to suit your tastes and wallet. Ho ho ho!

Disclosure: I received the book for the purposes of reviewing. All opinions are mine.
Posted by Galina Varese at 11:54:00