Birthday dinner at The Fleece

Last week my husband celebrated his big 5-O birthday (hush, don't tell anyone). We don't go out often in the evening (that is he does attend the High table at his college pretty regularly) so I thought his birthday was a good enough occasion to eat out. We invited our friends to join us at The Fleece.
It is a well-known gastropub in Witney, and one of our favourite coffee haunts. They make a very good cup of latte there. And if you come in the morning, you can also get free toast with jam and marmalade if you fancy a slice or more. I've seen some hungry people piling up their plates high with toast. But I digress.
On Thursday we have arranged for our childminder to stay with the boys. I glammed up as much as I could.
When I arrived to The Fleece, my husband and our friends were already there.
We pored over the menu, sipping a glass of prosecco. Finally, the birthday boy chose a Baked Golden Cenarth Cheese drizzled with truffle honey, and served with sliced pear and sultana bread soldiers.
According to my husband, it was very good. I had a little bite, and agreed that it was a good choice. 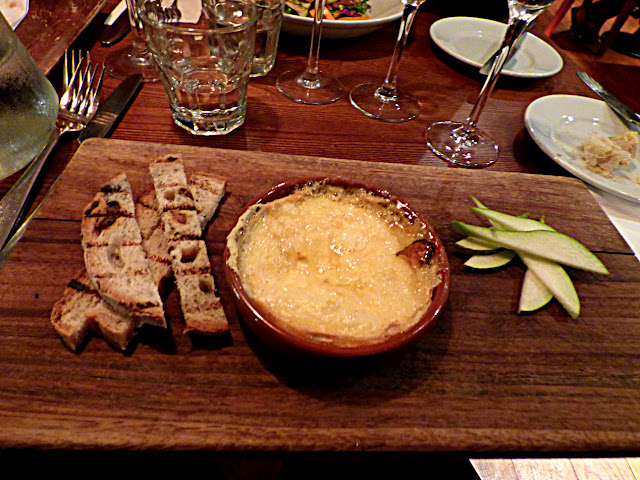 I fancied some wild mushrooms on a sourdough toast, served with a poached egg. I did ask what wild mushrooms they had, and the lovely young lady who served our table, has shown me the mushrooms. They were by no means wild, rather a selection of exotic mushrooms grown indoors which don't count as wild in my opinion. Anyway, I love mushrooms, and it was a tasty starter, albeit totally lacking in salt. I don't know if that's how they usually cook it, or whether it was an omission, but the mushrooms would have benefited from being seasoned during the cooking process rather than afterwards (I know, it's not a big deal, but...). 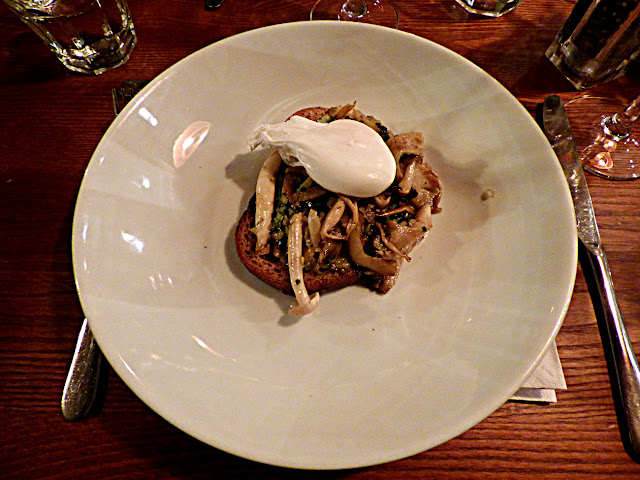 T has ordered Smoked bacon croquettes with pear puree and blue cheese salad, and I believe she enjoyed her starter. 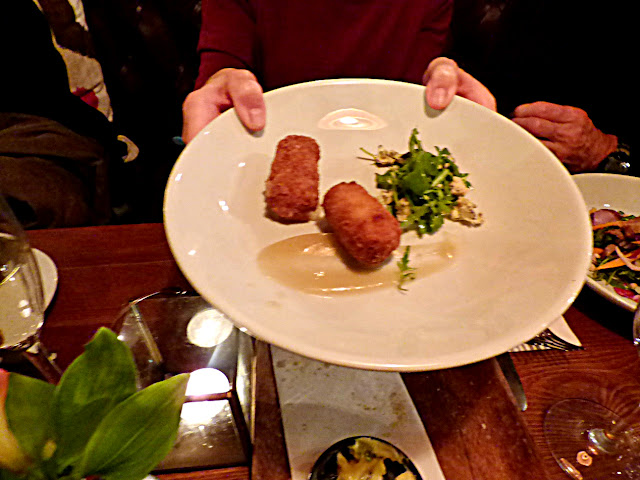 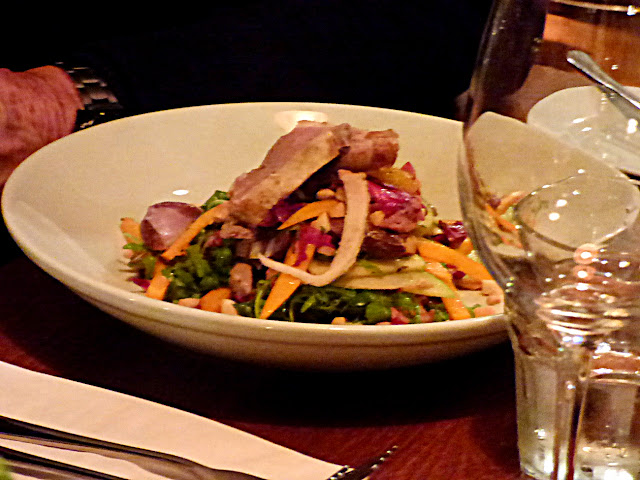 I love scallops, but don't often cook them myself, as I find them a bit tricky. Slightly overcook them, and they turn rubbery. My main of pan-fried scallops with shallot puree and Clonakilty (what a mouthfull of a name!) Black pudding was arranged around a mini-salad of watercress. The scallops were very juicy and sweet, and worked beautifully with a rather salty black pudding. Shallot puree was a nice flavourful touch. 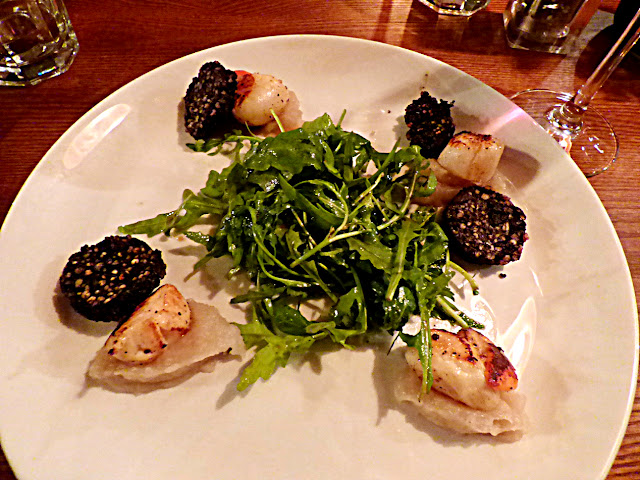 Onglet was one of that evening's specials. We actually had to google it, as none of us quite knew what this cut is supposed to be. Onglet is a French word for hanger steak (not that I heard of that one either). According to Wikipedia, it's a cut of beef steal prized for its flavour. It comes from the diaphragm of a steer or heifer. Apparently, "it was sometimes known as "butcher's steak" because the butchers would often keep it for themselves rather than offer it for sale". Though I was intrigued, I didn't quite fancy a big steak for dinner. Both men decided to try it and were impressed. It proved to be a great choice. 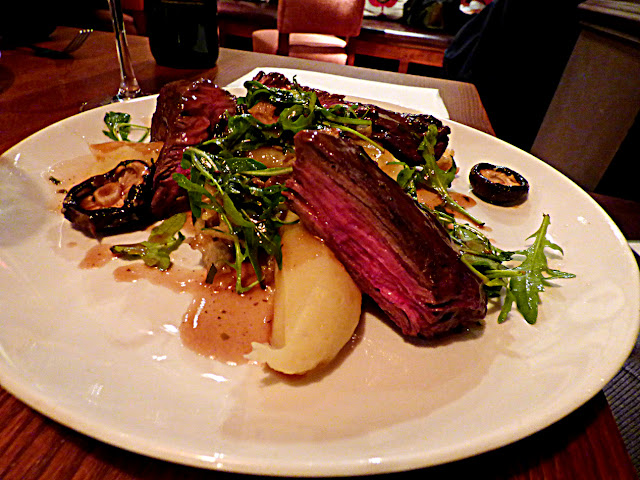 The ladies (that is our friend T and I) are big cheese lovers, so we ordered a Full Cheese Board to share. It included all five autumn cheeses, served with chutney, crackers and sliced apple.
There was a Wookey Hole Cave aged Cheddar (made with vegetarian rennet) is an award winner. It is crumbly, strong-tasting, with nutty undertones.
Brie de Nangis is a French cheese, soft and creamy, very moreish spread on a cracker.
Baked Golden Cenarth is a Welsh cheese, served hot with a little bit of truffle oil. Excellent to dip in.
Carre de Sologne is another French product, this is a goat's cheese, luxuriously creamy, with a distinct flavour.
Organic Cropwell Bishop Stilton is one of my usual favourites, I often buy a little chunk. It's mellow and tangy.
The combination of these delicious cheeses worked very well. Though I wouldn't have minded a few more crackers to go with this amount of cheese. There are never enough crackers.

After the prosecco, we were drinking Fantini Sangiovese, Terre de Chieti Farnese, a Tuscan trophy-winner at the IWC. This light fruity red couples cherries with toasted marshmallow flavour (I actually thought it was more black currants rather than cherries but then I am a total amateur when it comes to wine).

It was a lovely evening with friends and a special dinner. We'll definitely have dinner at The Fleece again. 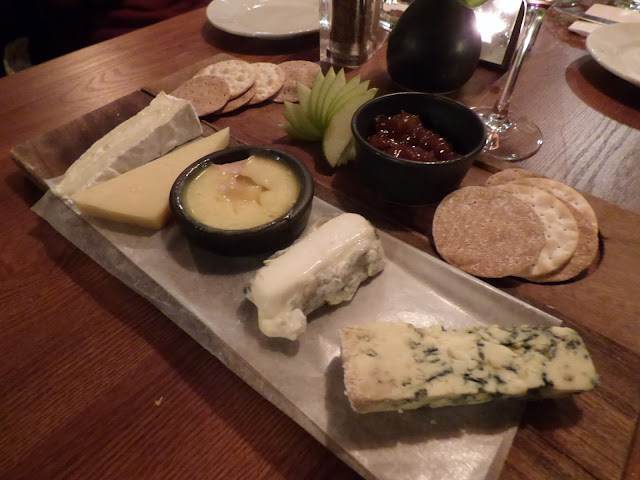 Federico fancied something light after his big main dish. Mango sorbet was sweet, fruity and flavourful. 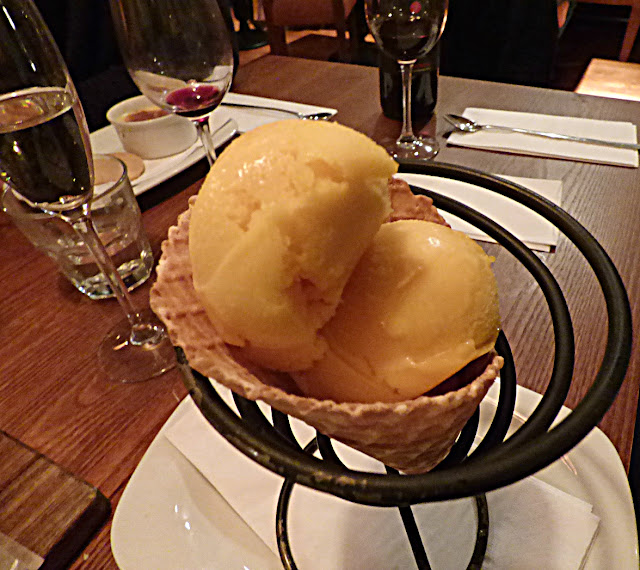 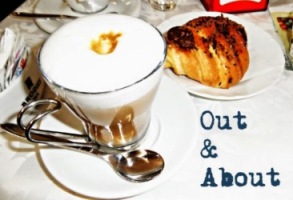