My grandfather Dmitri didn't like to talk about the war. He was a kind, good-natured man, whom I remember with great fondness. My grandma and he lived in a whitewashed house on the edges of a small village in the South of Russia. He was a forester who spent a lot of time outdoors. I remember how his eyes twinkled when he played with my little brother and me.
It's only from the stories my Mum told about him that I know that he was one of the defenders of Sebastopol. He was in the Navy, and when his ship was blown up and sank, he and his mate survived in the sea for eight hours before they were picked up by a small boat which took them to safety. My grandfather was badly wounded, and survived only because he was holding onto the floating mine. Imagine, holding onto the deadly weapon that could blow up any moment and waiting to be rescued. Such a love of life. 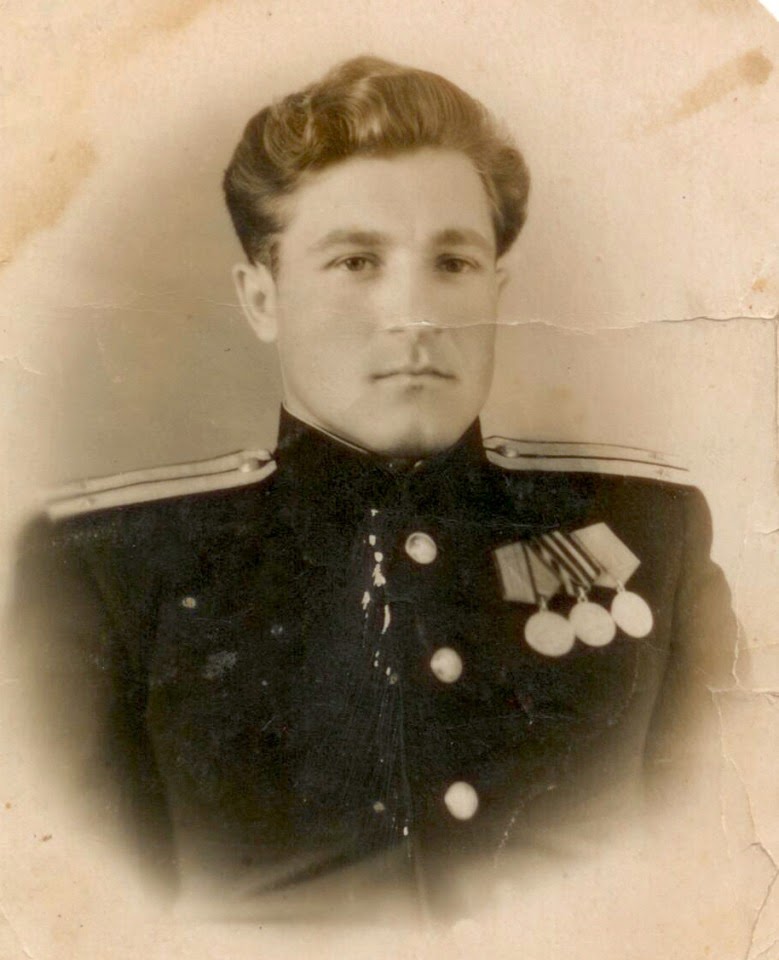 He was my grandmother's husband, and a father to my uncles. My Mum was his stepdaughter. And he was the only grandfather I ever knew. Blood or genes don't matter, I often think. It's the love and humanity that are much more important. Funnily enough, when he took my brother riding on a horse, the villagers often commented how much alike they looked. And so they did.
Dmitri was a Cossack, he came from those parts of Russia which are so eloquently recreated in Mikhail Sholokhov's book Tikhii Don (And Quiet Flows the Don). He was very handsome too, even as an older man.
Next week we'll be celebrating the 70th anniversary of the capitulation of the Nazi Germany in 1945. There will be parades, there will be events and concerts. Not many of those who fought in the WWII are still alive. My grandfather died 30 years ago. He didn't like the parades and loud speeches. He didn't like to talk about the war. He was one of those who brought this victory one step closer.
I want to salute him and all the other veterans who saved Europe from Nazism.

When Love Potatoes (the ultimate potato resource) asked me to take part in a VE recipe challenge and recreate a wartime dish, I had a perfect recipe in mind - potato dumplings which my grandfather loved so much.

During the WWII when food was scarce, culinary recipes of the wartime were often very simple. Potatoes were one of the staples and main ingredients.
As it happens, potatoes are the original superfood which include Vitamin C, B1, B, Folate, Iron, Magnesium and Potassium. Potato was much promoted in the wartime Britain as well. The Ministry of Agriculture & Food even created a fun character called Potato Pete to inspire people to eat more potatoes.
Some of the wartime recipes stood the test of time. They are tasty, healthy and nutritious, cooked with a few simple ingredients.
Would you like to try a recipe for potato vareniki (dumplings)?

Start by mixing the dough. Sift the flour in a medium sized bowl, make a well and add oil, salt and water. As the eggs were scarce in the war, I have used a recipe without any eggs, but a modern version of the dumplings dough would often use an egg or even two, depending on the amount of the dough you're making. Mix all the ingredients well and knead for about 5 minutes. Let the dough rest in the bowl, covered with a towel, for about 40-45 minutes.
In the meantime prepare the filling. Chop the pancetta (if using) into small cubes and fry in the frying pan with 1tbsp of oil and finely chopped onion until well-browned. Cook the potatoes in salted boiling water until soft, drain and mash. Add the fried onions and pancetta. Mix well, this will be your stuffing for dumplings.
Roll the dough with a rolling pin until very thin. Using a cookie cutter, cut out small circles of dough. 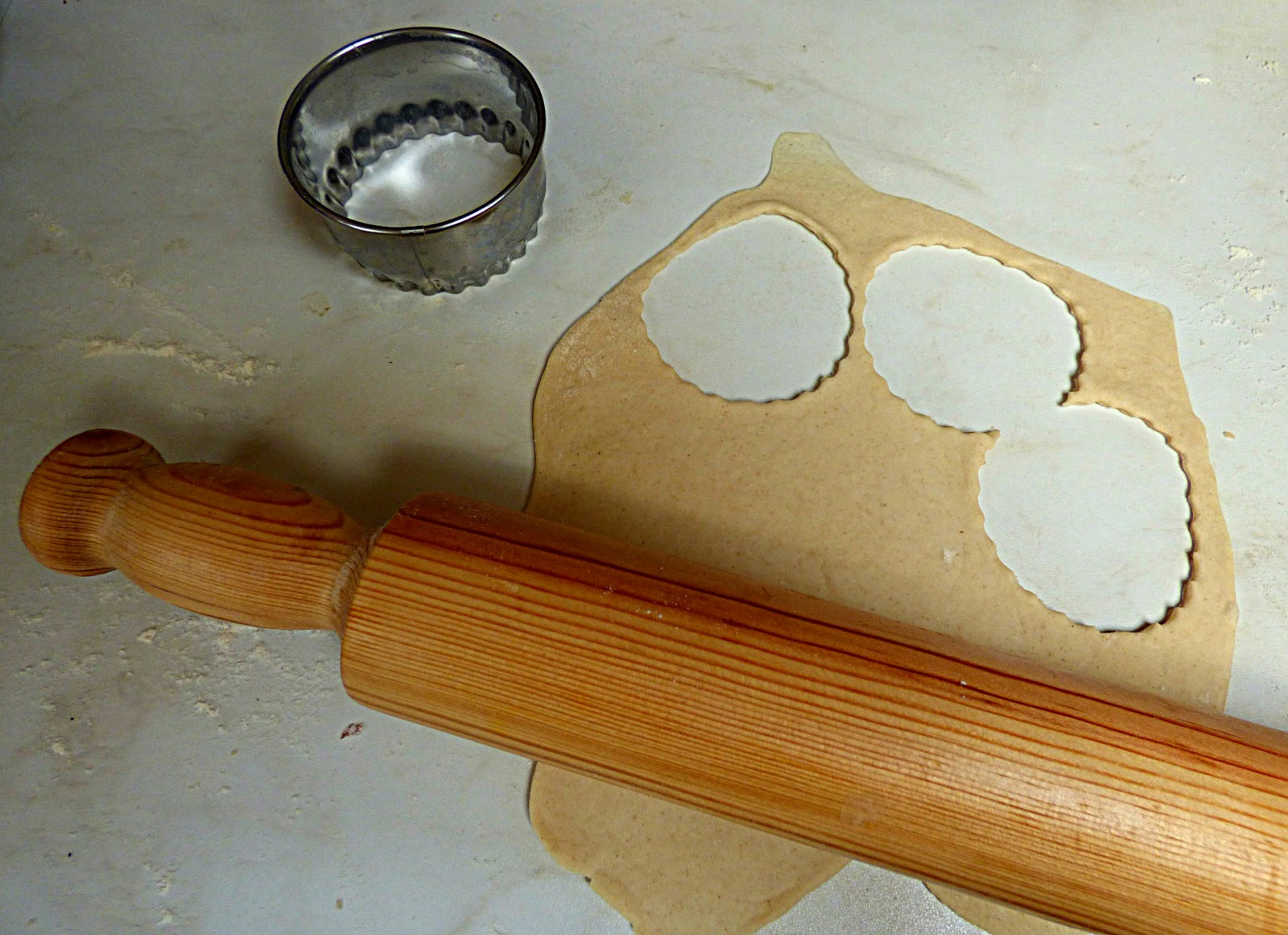 Add a small amount of the filling into each circle of dough, fold in half and pinch the corners tightly to seal the pocket. Then pinch the edge like a scallop.


There will be about 50+ dumplings, depending on the size. Mine are actually medium sized. You can make them bigger or smaller. 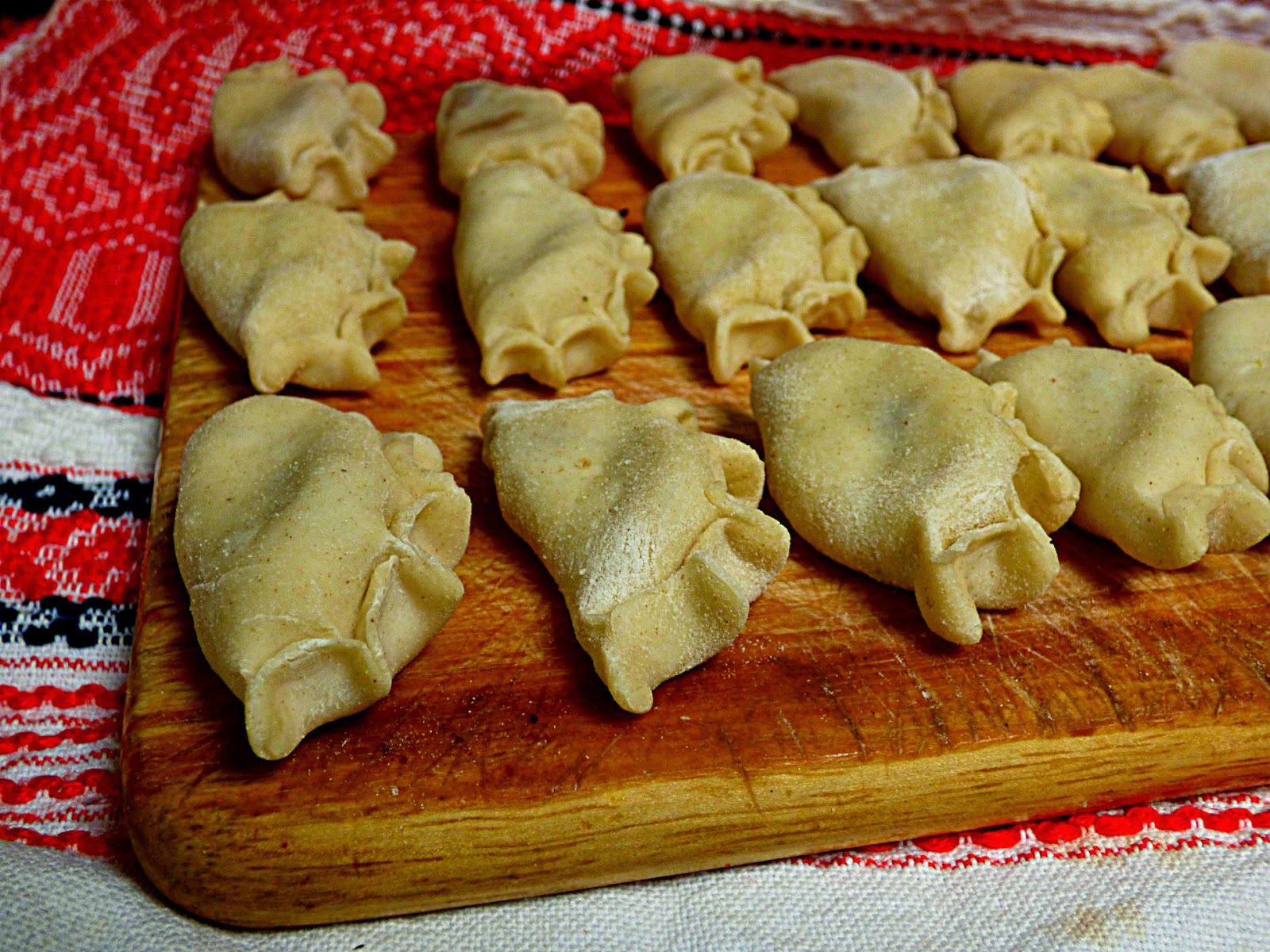 They are supposed to freeze well, if you don't want to cook all in one go. Cook the dumplings in the boiling salted water, in batches. Once the dumplings rise to the top, they are ready.
Serve them with the soured cream with chopped spring onions. Or just fried onions in oil.

For the best mash I used a smooth potato variety - Desiree. It has a thin red skin and a creamy tasting flesh, perfect for the smooth mash. It is also great boiled or cooked as roast potato wedges.

In this recipe I used a chunk of pancetta, which is an equivalent of the cured lard that was so popular during the war and actually still is quite popular in the Russian cuisine, especially in winter. It's one of the meat staples that could be kept without a fridge, as it is a very fatty piece of meat, often just the lard itself which is salted and cured. It was included in the soldier's rations.

I was just reading an essay by E.Krinko and I. Tazhidinov on the food rations of the army in 1941-45 (the link takes you to an article in Russian). The standard daily ration included 800g of rye bread (or 900g in winter), 500g potatoes, 320g other vegetables like fresh or pickled cabbage, carrots, beets, onions and greens), 170g grains or macaroni, 150g meat (often tinned, like Russian Spam), 100g fish (most often, very salty herring), 50g fat including 30g of lard and 20g oil), 35g sugar. Plus they had 20g of tobacco, and monthly - 7 books of rolling paper and 3 matchboxes. Of course, depending on the situation, the ratio often was much less than that. 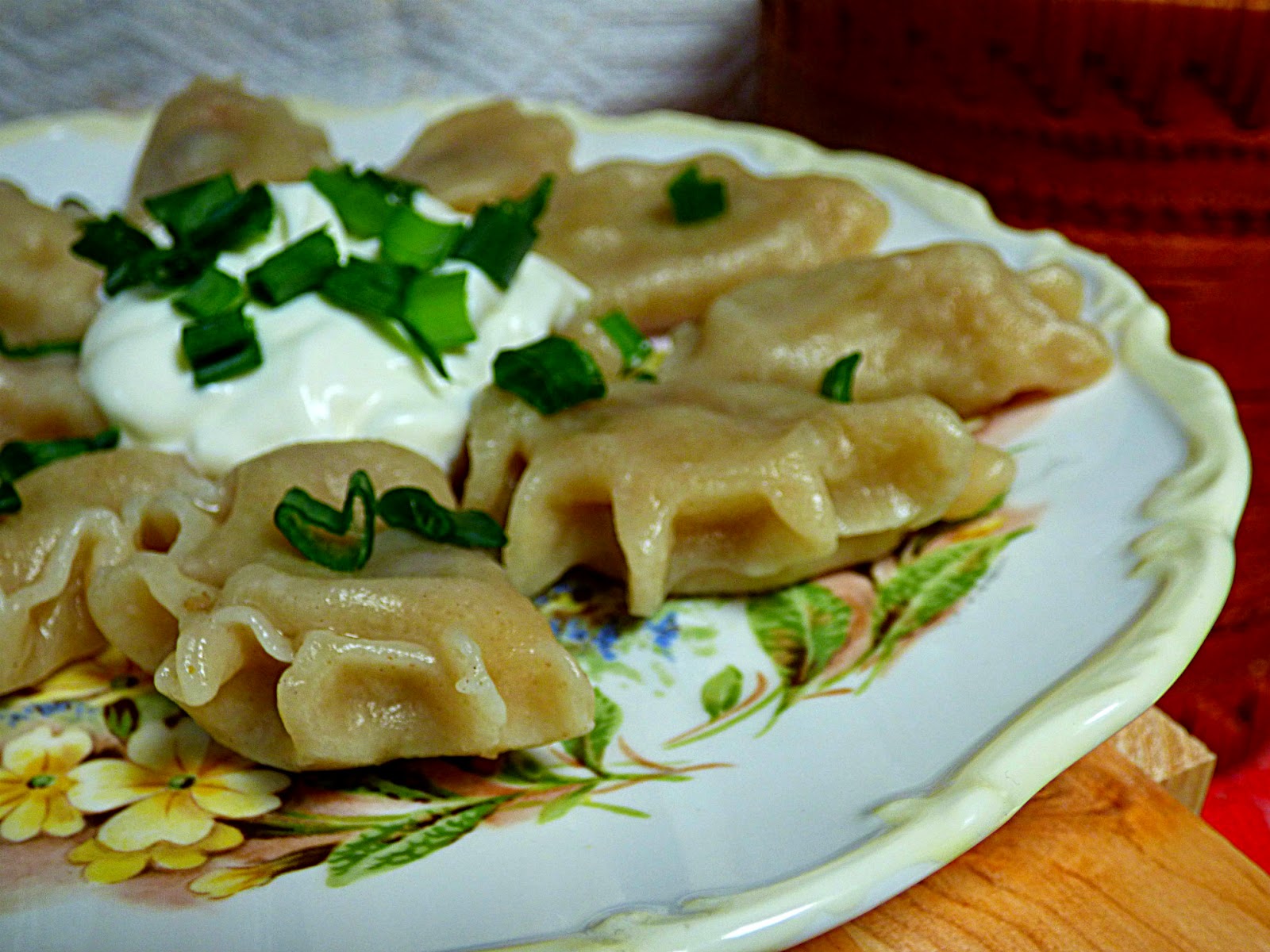 Which wartime recipes using potatoes have you tried? Have you heard of Lord Woolton Pie? Or Oxford potato soup? And how about Sole Otero? 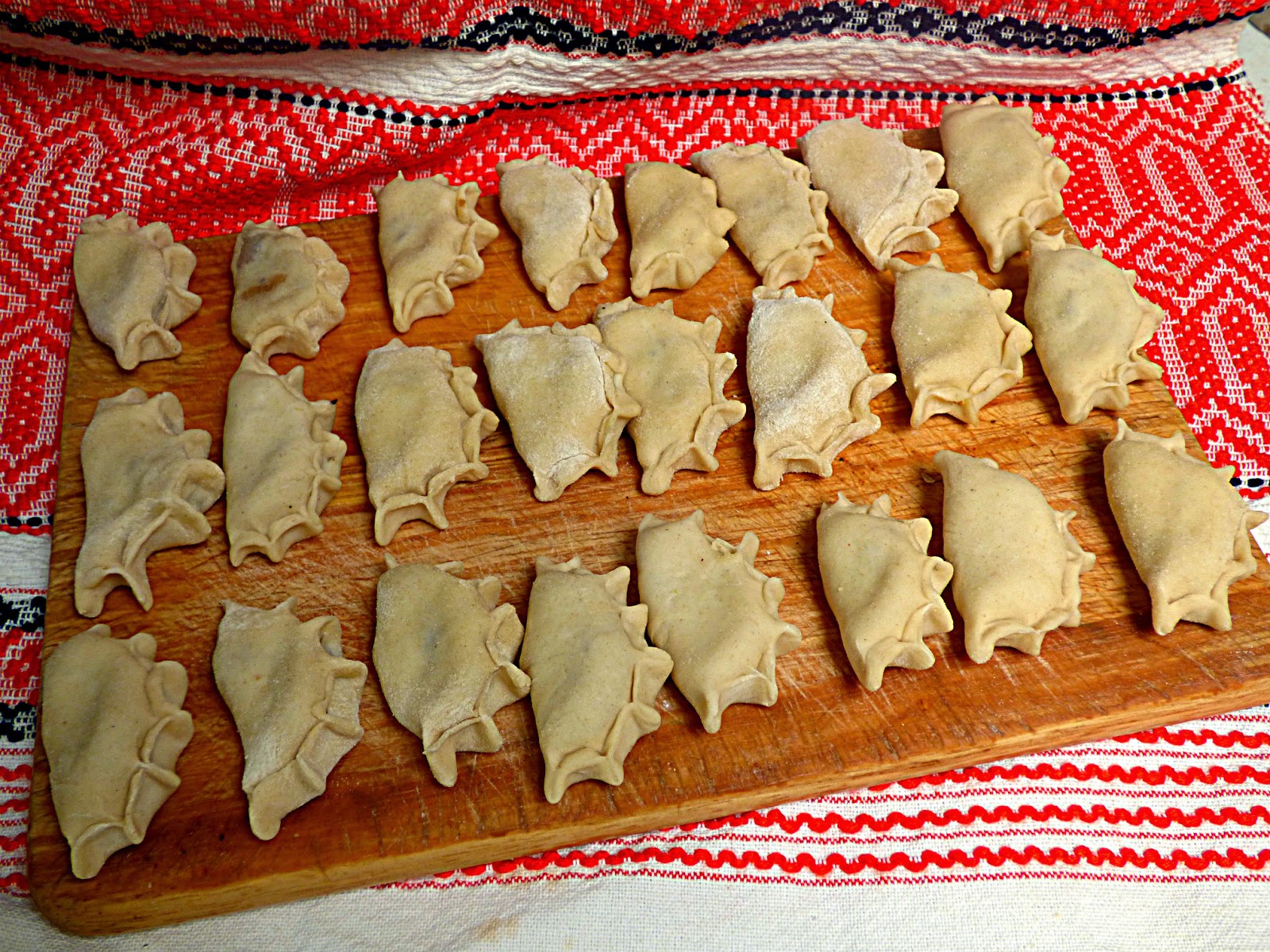 If you liked this recipe, you might love to read about the other wartime recipes using potatoes - have you seen a marvellous WW2 Whit salad cooked by Karen from Lavender and Lovage? or a creative twist on Woolton pie - Woolton pizza pie made by Janice from Farmersgirl Kitchen?

Do you have family recipes to share which go back to the war times?