Cardboard boxes have always being top favourite toys for many children. Both of my kids would happily play with the boxes when they were little, quite ignoring the gifts which arrived in the boxes. As far as I know, this is a universal phenomenon. Kid-Eco took the cardboard creativity to the next level. They produce an amazing range of toys from recyclable & biodegradable materials.

Their playhouses and toys are wonderfully imaginative and inspiring. You can choose a car, an aeroplane or a rocket, a castle or a fort, a doll's house (I want one!) or even a Christmas tree. 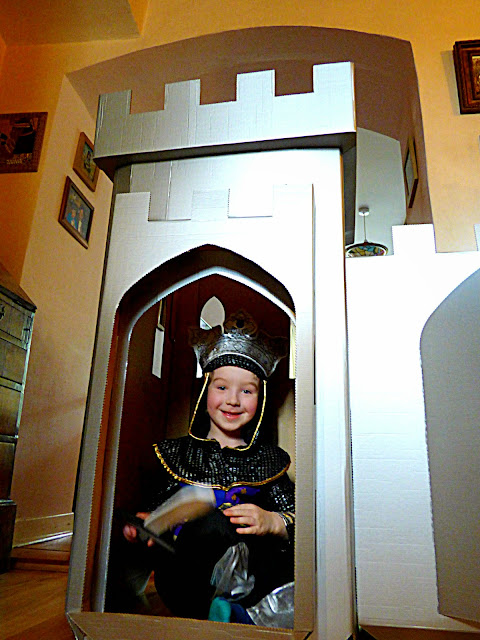 My younger son Eddie loves dressing up, and he has a King's costume, which comes with a sword and a shield. The only thing that was missing was the castle. Eddie was ecstatic when the big box was delivered, with the castle inside. The cardboard castle arrived as a flat pack, with easy instructions.

He's been paying with it for days. It's covered with his doodles and writing inside, and we have also decorated it outside.

It would be perfect for the Early Years Foundation Stage activities. In fact, my son's class (Reception) built a cardboard castle a couple of months ago. They have partitioned a corner by a big screen with a gate, and decorated it. This castle would have been a wonderful addition to the classroom. In fact, I have suggested to Eddie that maybe one day we could take the castle to the school, but he's adamant he wants to keep it forever.

We have chosen a silver castle but you can choose a different colour scheme: brown, white or even pink for your little princess.
Eddie's been inspired by Puff the magic dragon song he has learnt recently at school and wanted to add a little dragon to one of the turrets.
I helped him by drawing the outline and cutting the dragon out of the cardboard (we re-used the big box which the castle pieces have arrived in). Eddie painted it with poster paints, glued an eye and glitter stickers.

And we glued "King Edgar" in plastic letters to the turret as well. As you can see, there is still plenty of space to decorate, and I think we'll do something else for the turret with the crown. Maybe a mini-knight. 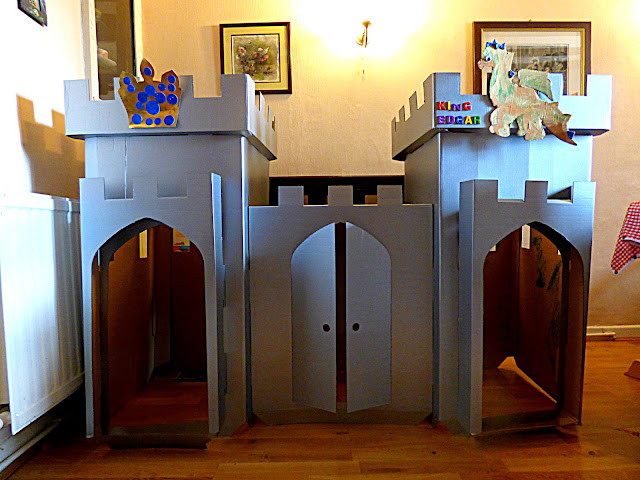 He also decorated a big golden crown, and went a bit over the top with the glitter stickers.

This is an excellent toy, perfect for creative activities and imaginative role play. It will make a super gift for any younger child. And as for my little King, he loves his castle.

Disclosure: We received the castle for the purposes of reviewing. All opinions are mine.
Posted by Galina Varese at 20:57:00