Our first Twitter party with Blaze and the Monster machines

My younger son Eddie loves parties. He's a true social animal, and is counting days until his next birthday party (which is in July). Despite me showing him on a big calendar when July is, and how many months are still in between now and then, he is talking about his party as if it's going to happen tomorrow. He tells me who he is planning to invite and what cake he wants to have (at the moment it's a split between Spiderman and Ninja Turtles). Being so enthusiastic about parties in general, he was absolutely thrilled when I told him we were going to host a NickJrBlaze party.

If you follow me on Twitter, you might have seen my avalanche of tweets before and during the party.
We invited Eddie's nursery and school friends (as well as their Mums). All the boys settled on the sofa to watch the premiere of Blaze and the Monster Machines on NickJr.
Just who or what is Blaze?
Blaze is Axle City's greatest hero and its number one racer. He is super fast and fearless, but also smart - he knows a lot about science, technology, engineering and maths (STEM). He uses his scientific knowledge in the difficult situations. His best pal AJ is a driver and a techie expert. 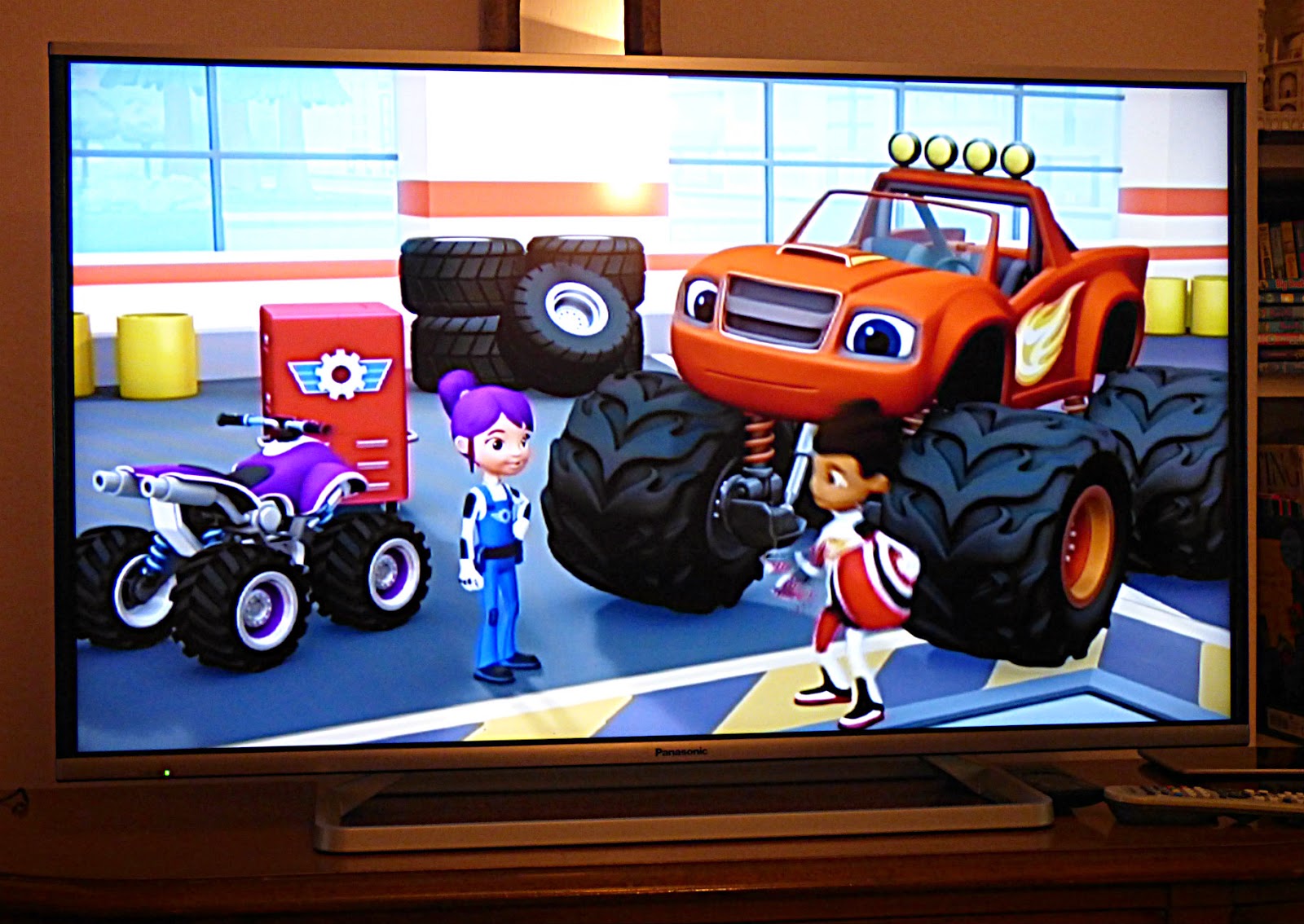 The boys were literally glued to the screen. You should have seen them, quiet and absorbed into the new show. I even joked to their Mums, saying how angelic they looked. The boys are all four years old (turning 5 in summer), except little C who is just over two. They all gave the new show thumbs up and told me they enjoyed the race on the tracks the best.

Since Friday my son watched the DVD of the first episode several times already (we were sent a preview DVD).
Having fortified themselves with some tasty snacks and drinks, kids were happy to do the activities, and for the next hour and a half we were very busy. You can say - chaos reigned supreme.
First activity was quite an easy one.
The boys had to follow the maze and help Crusher find Pickle. 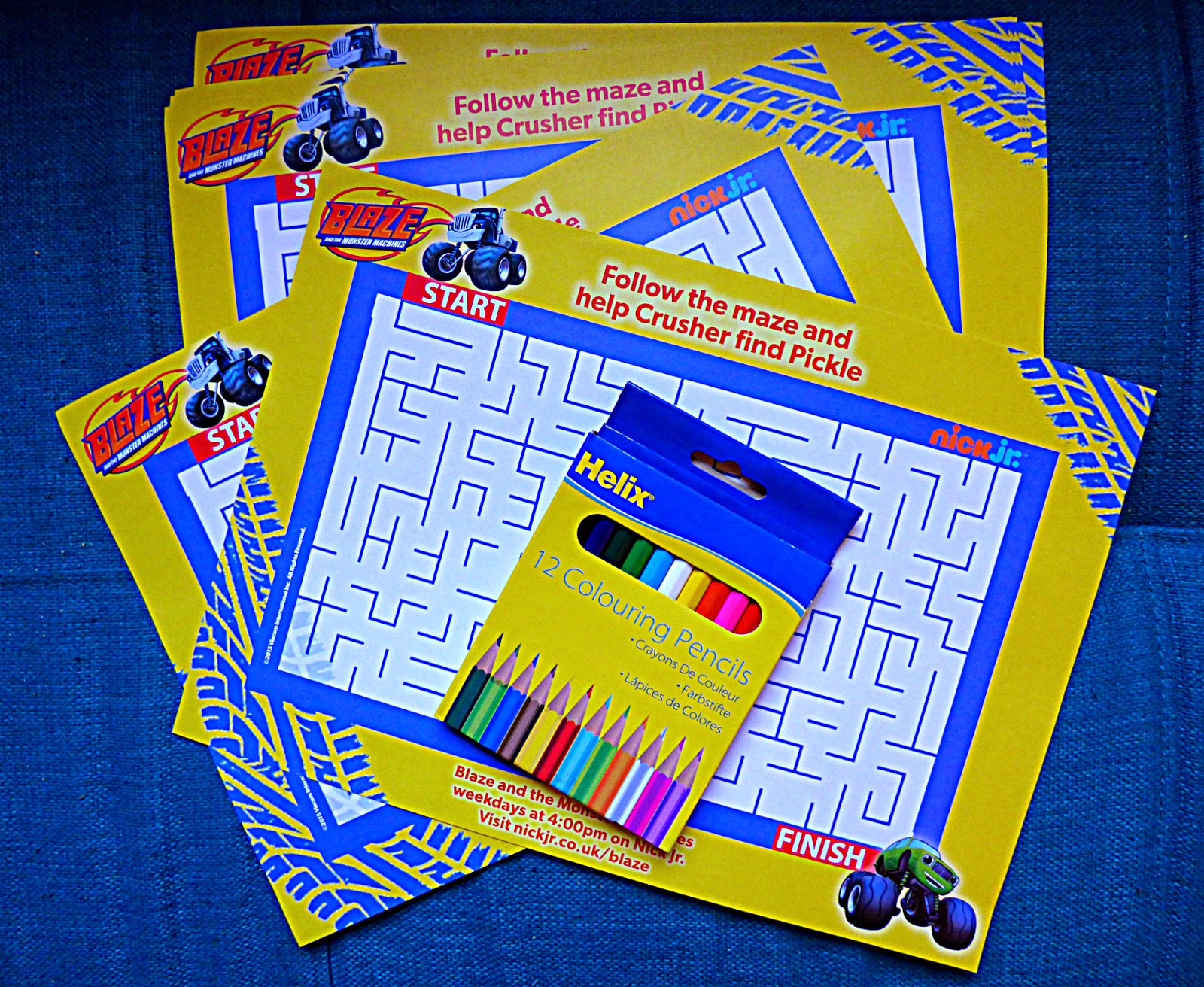 They were happy to create mini-cars from Milky Way bars, making Smarties' wheels and Jelly Babies' drivers. I made one in advance to show how it was supposed to look like. When the time came to do this activity, I got all flustered: "Where's the driver?" Eddie looked at me with guilty eyes and said "I ate it". Never mind, there were plenty of jelly babies to make another one. 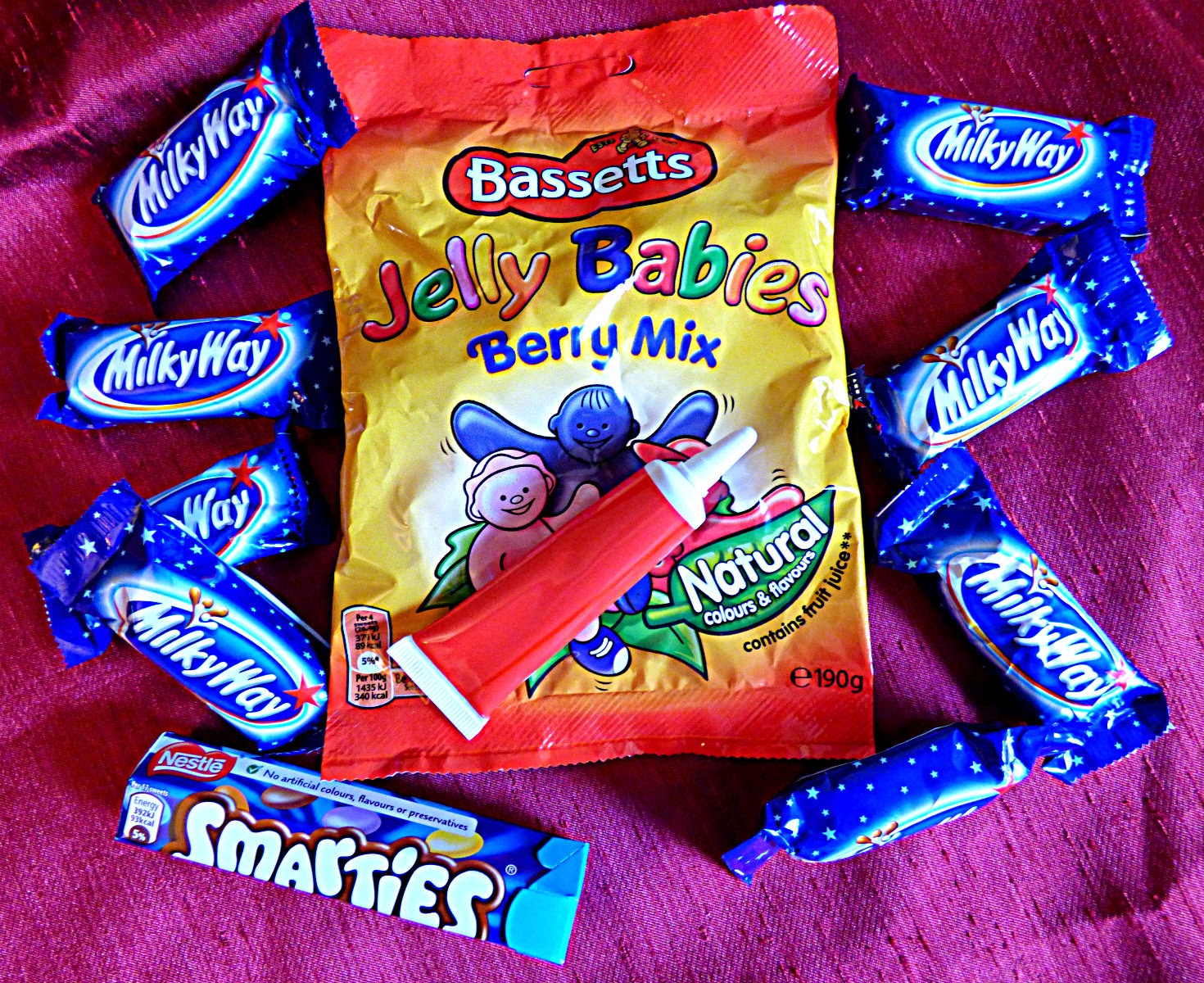 Boys assembled their cars with great enthusiasm. And then, mini-cars, quickly disappeared. 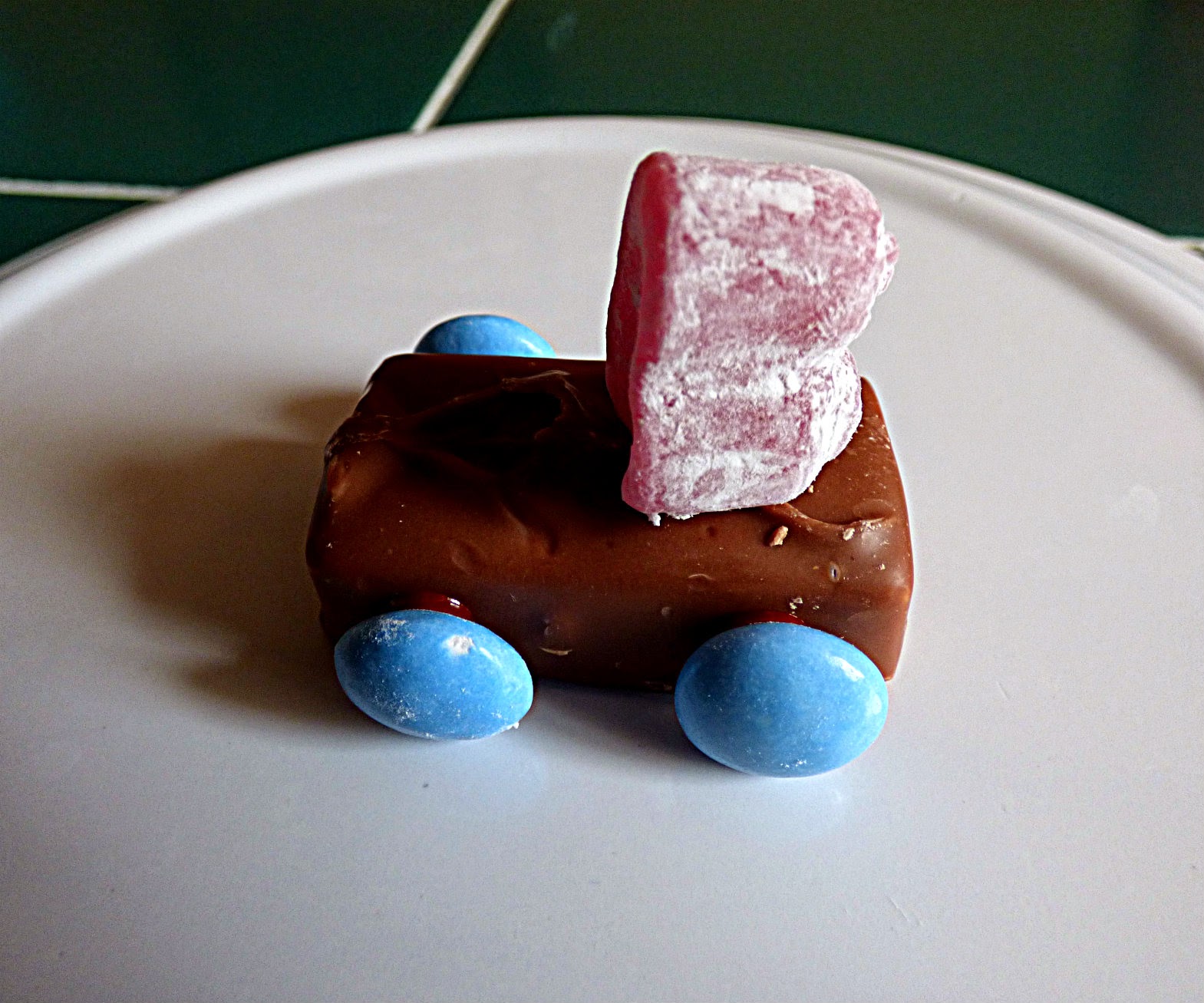 The next activity was the most challenging: we had to build cars from cardboard boxes, wooden sticks, wheels, using stickers and plasticine. 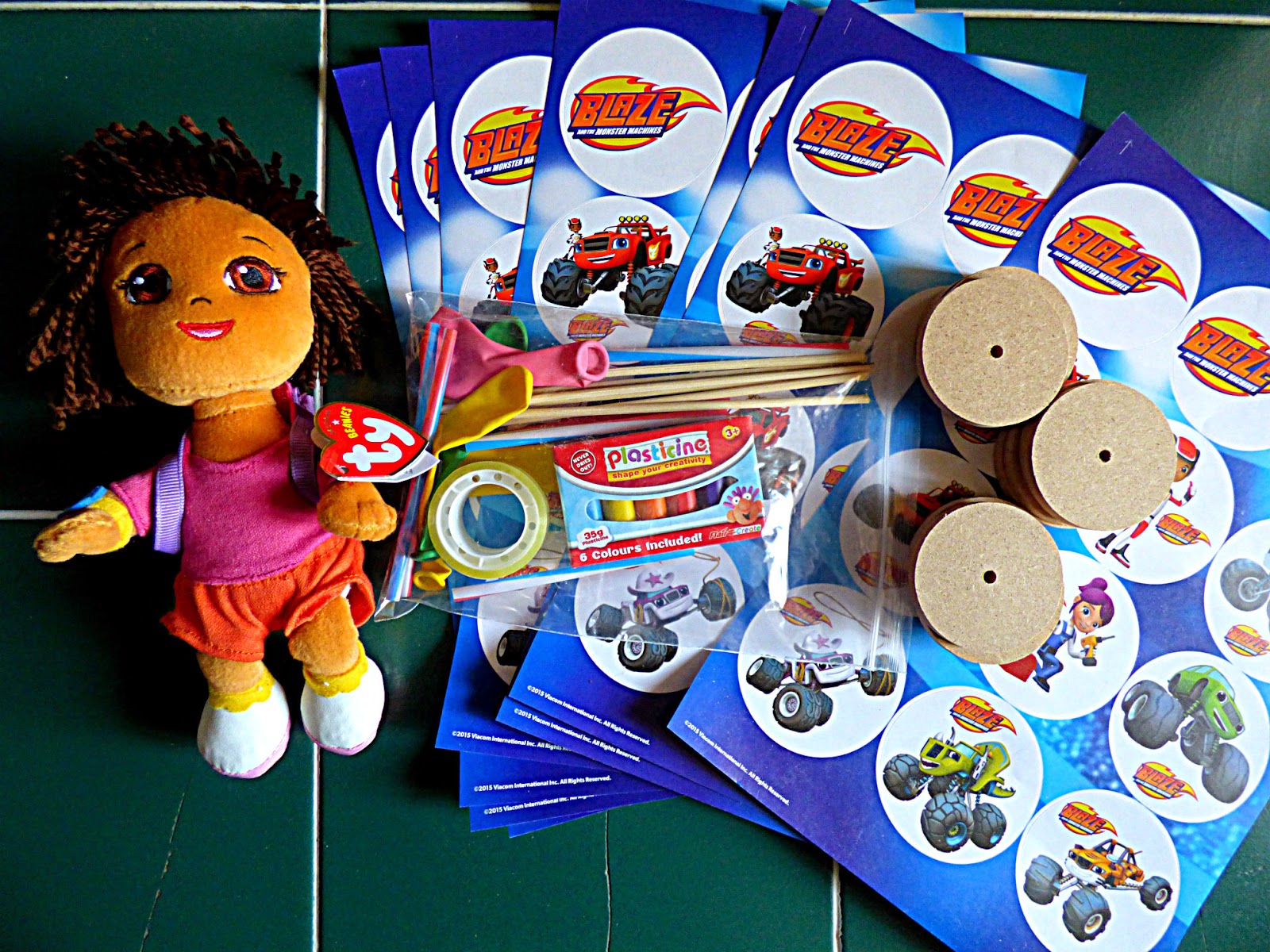 We split into three teams, and worked hard on our cars. We kept laughing, saying we'd never be good as the Blue Peter presenters. 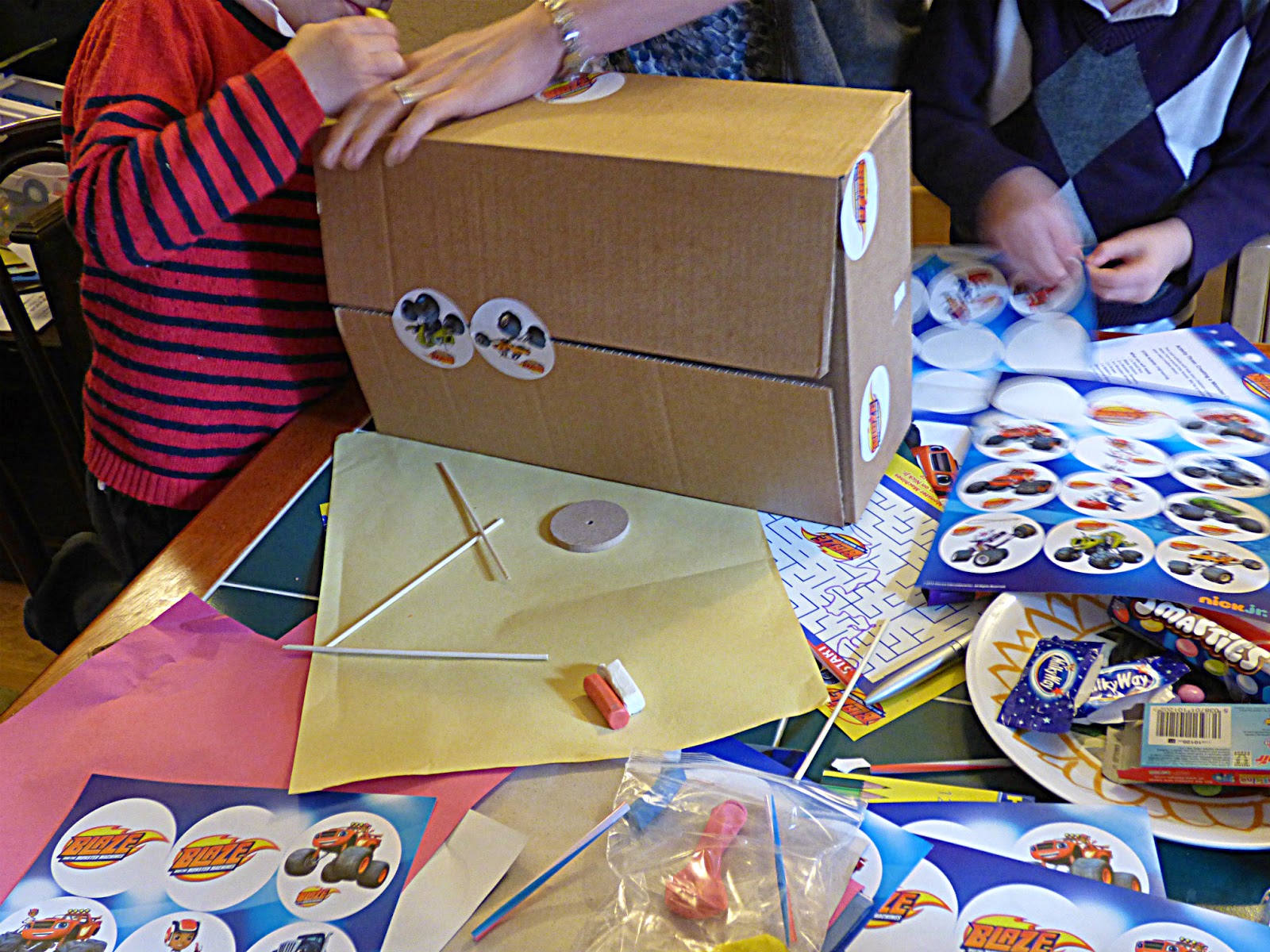 That's Eddie's and mine creation, it didn't last very long, as the wheels kept falling apart. 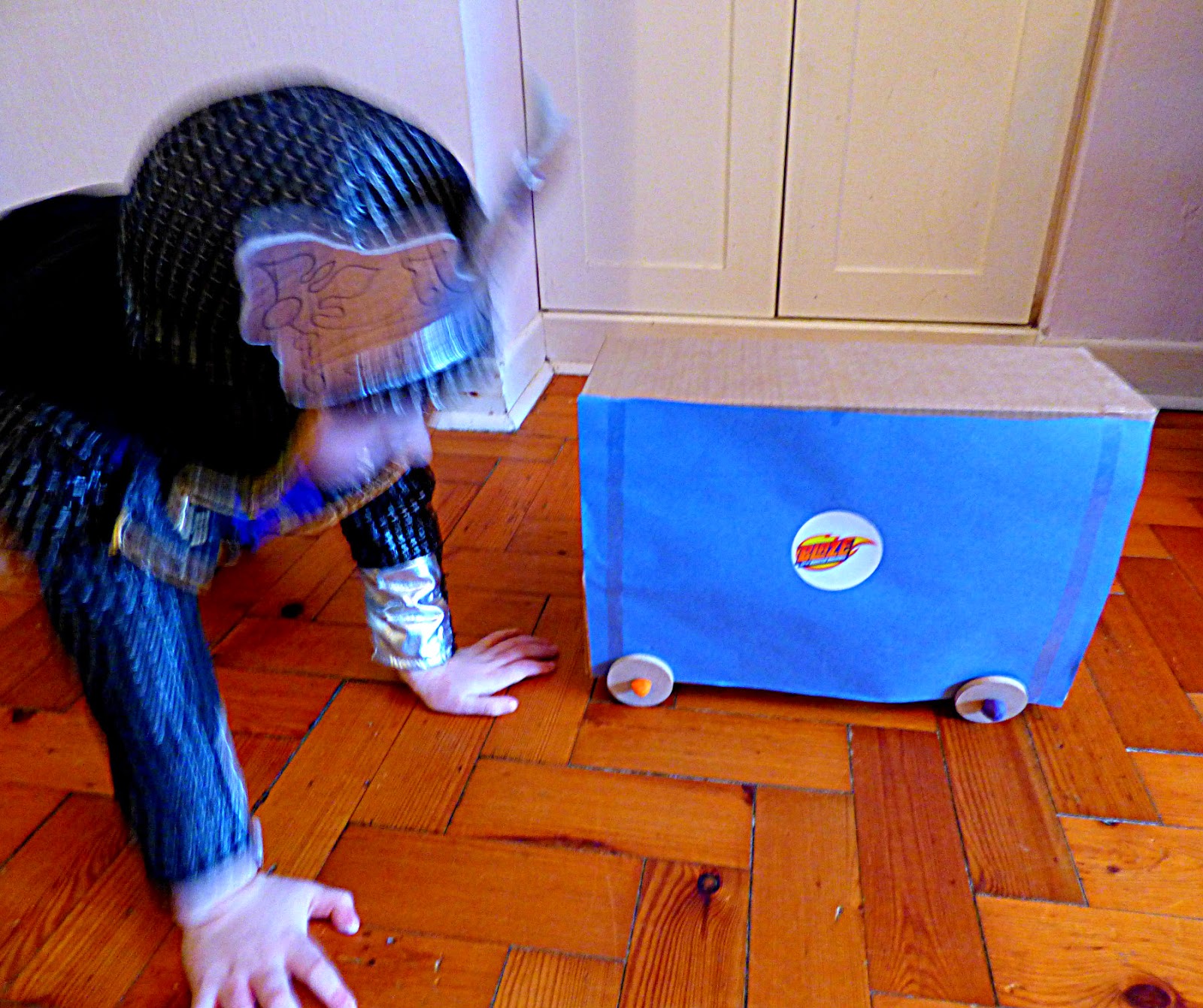 After a car-building session we moved onto a colour, shape and number sorting activity. 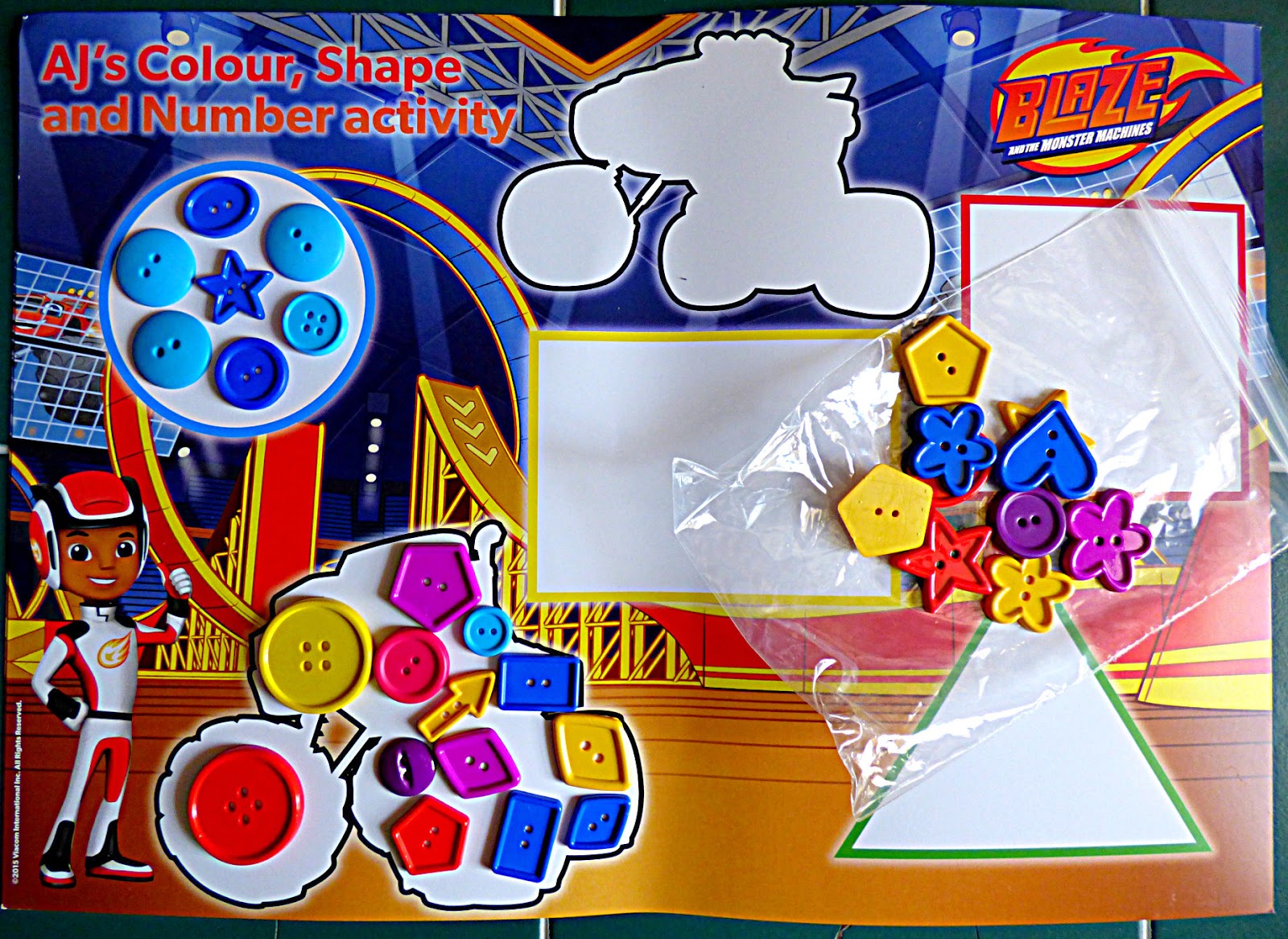 For technology we tested the laws behind buoyancy - in simple words, finding out which items sink and which float. I had to to take the bucket out in the garden, so that we don't splash the floors. 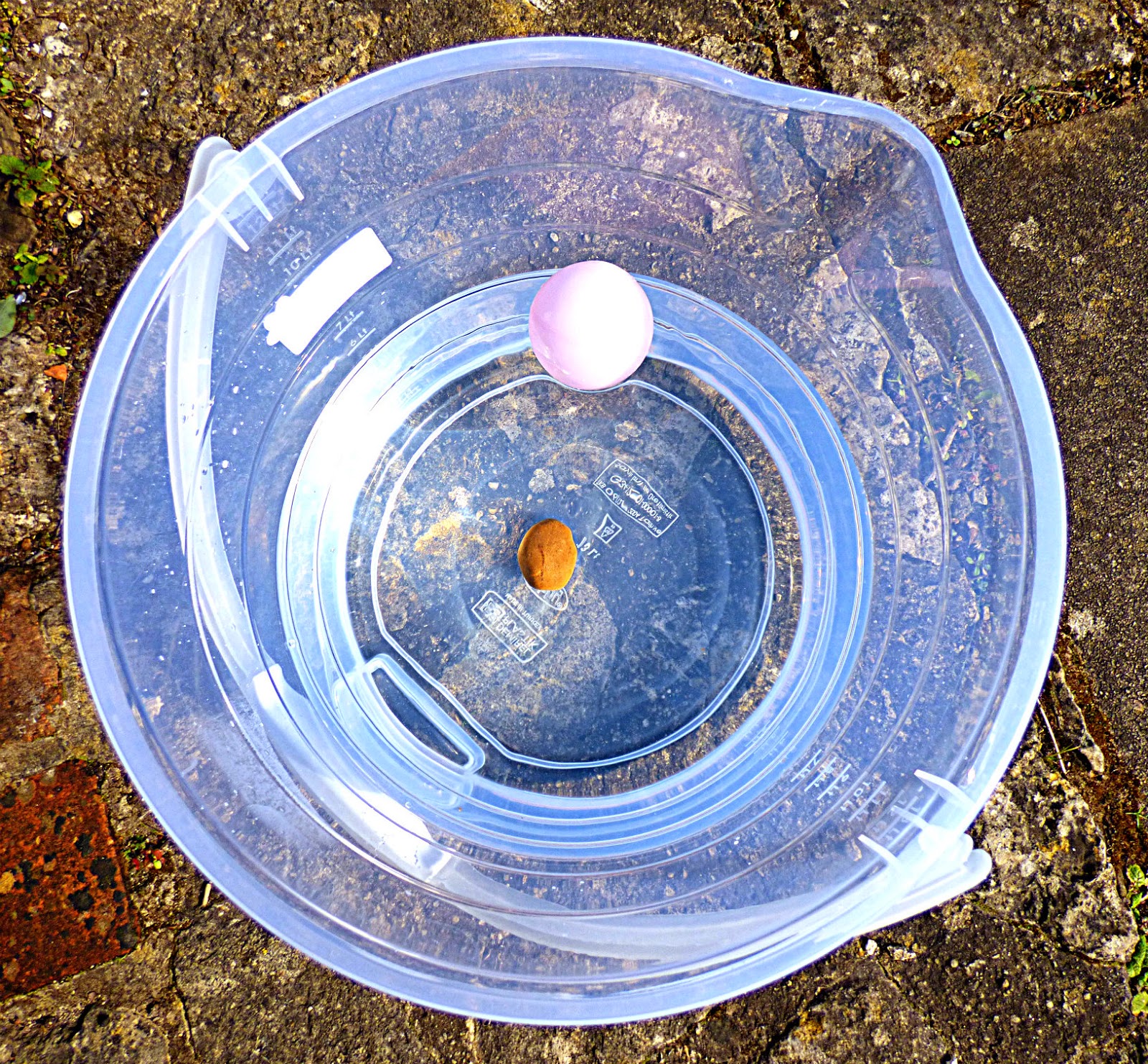 Lemon Clock from Great Gizmos was a big hit. I had to read and re-read the instructions, as I'm not very good at techie things, but this was easy enough.
We were all amazed when the clock started working. This is such a fun little gadget, and will make a fab gift to anyone who loves technology. 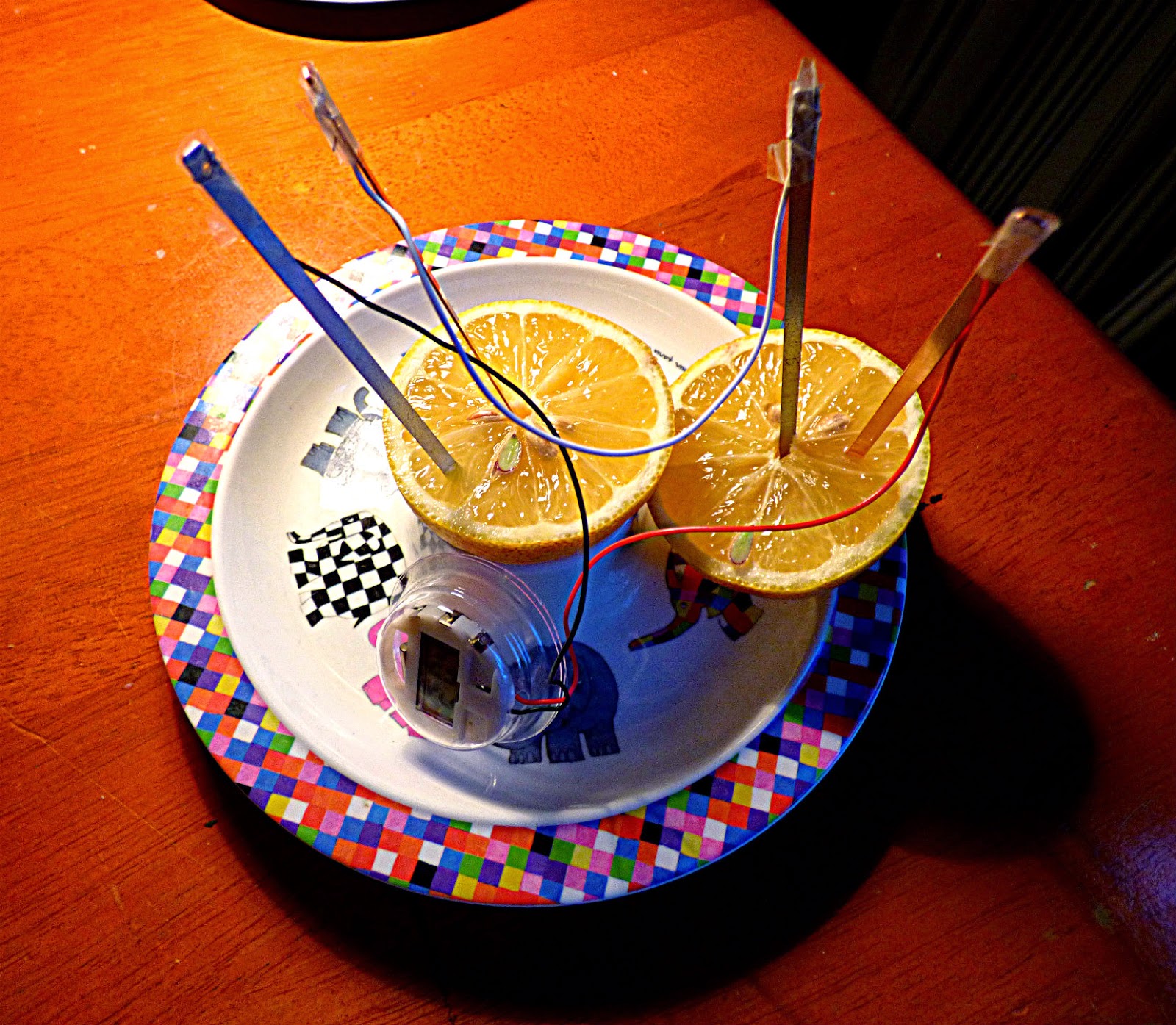 It was our first Twitter party, and we had a fantastic time. All the boys were thrilled with their goodie bags. Little C uttered his first words of the party (he's been pretty silent until then), exclaiming "um-bella, um-bella! wain, wain!" Older boys were as excited. When it was time to go home, and C's Mummy tried to put the umbrella in the bag little C had a bit of a meltdown as he didn't want to part with his um-bella even for a second.
It was a great fun, and a lovely active party for all the boys.
If you ask my son, he's ready to host another party any time.

Disclosure: we received all the party activities and goodies bags to host a Twitter party.