If you decided to observe Lent and go meatless, soups are certainly an answer to a question What to cook? Lenten recipes don't have to be bland and lacking in flavour. If you are running of ideas though, you might consider getting a Superb Souping Box from Abel and Cole. I have been a customer of A&C for a few years, on and off, skipping some weeks altogether, or ordering for a few weeks in a row.
I love soups, and was very curious to try their recent addition to fruit & veg boxes - Superb Souping boxes. which are different each week. So far I have tried two of them (the third one was delivered just yesterday, and I'm cooking one of the soups today)
Soup boxes come with a selection of vegetables, fruit, herbs and spices as well as recipes for three wholesome soups.
To give you an idea on what to expect, have a look inside the box. The first Souping box I ordered had ingredients for 3 delicious soups, all vegetarian. The recipes suggested cooking a Winter Pho, Spanish carrot soup and Bay beet borscht. I cooked the first two soups and used the vegetables for the 3rd soup in a different dish, but I will use the recipe one day. 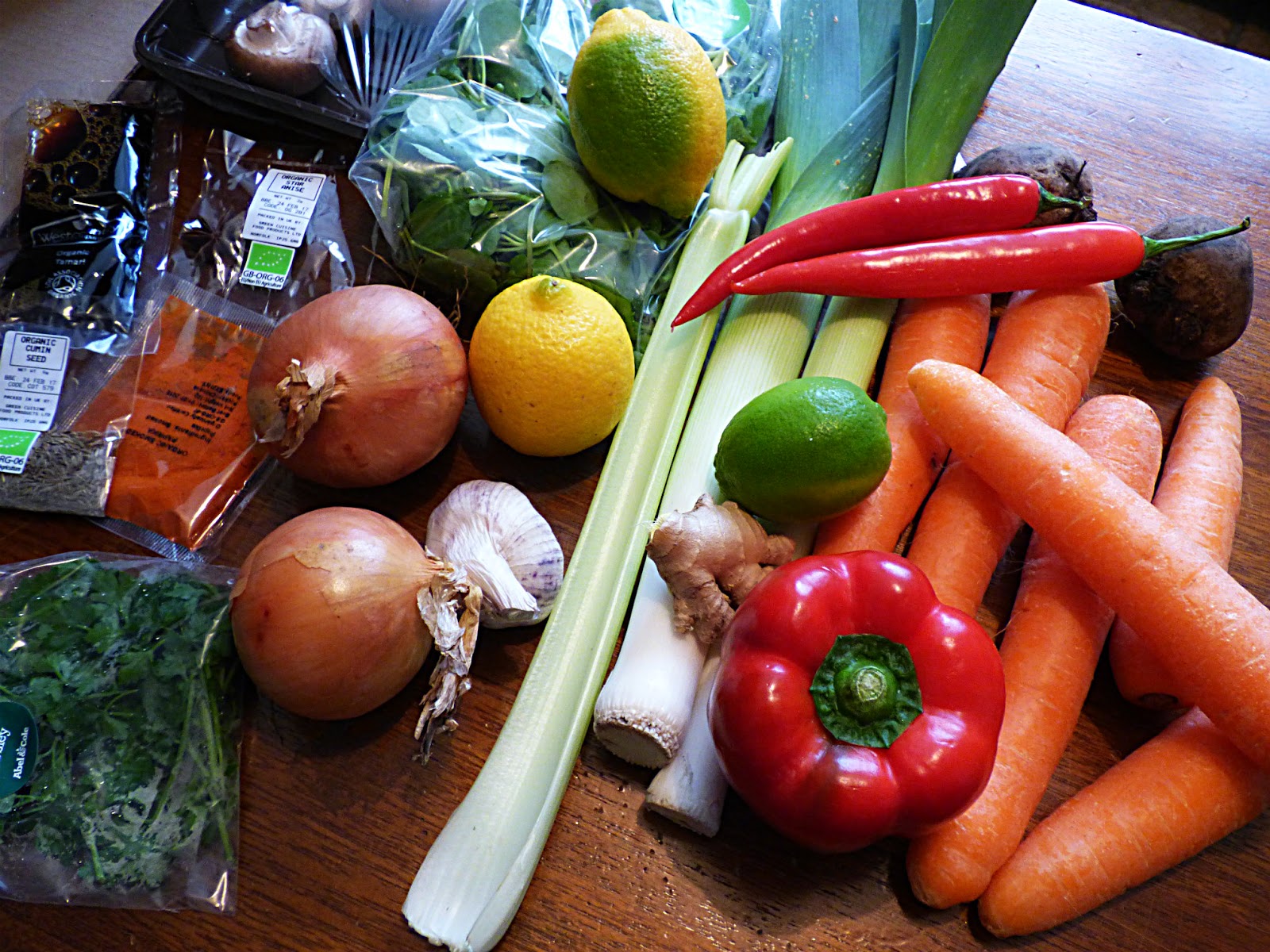 Winter Pho was a delightful hearty fusion soup, a mix of English and Vietnamese flavours: leeks, carrot, mushrooms and watercress were cooked with chilli, ginger, garlic, star anise, juice and zest of lime and tamari. The addition of zest and juice of a whole lime made it extra special. It was easy to make and tasted delicious. A real winner.

Spanish carrot soup was a pureed soup variety, vibrant, colourful and zesty. I love carrot soups, and usually add some orange juice to it. This recipe asked to roast the carrots first. Cook the red pepper, cut into strips, with an onion, garlic and chilli. Add smoked paprika, zest and juice of one lemon and cumin seeds. Smoked paprika adds an extra warmth to the soup. It was great comfort food.


The second box had ingredients for Moroccan chickpea soup, Mushroom and rosemary soup as well as Parsnip, Banana and lime soup. It's the last soup that totally sold it to me. I haven't tried those flavours together in soup before, and was very curious.
Abel & Cole themselves say in the recipe "Banana in a soup may sound a bit bonkers. Trust us - it works, and adds a creamy, velvety depth". I am so glad I gave it a go.
Parsnip, banana and lime soup might not have been a looker, but oh boy, it was so good. I am definitely keeping the recipe to use in the future. It uses 2 parsnips, onion, red chilli, garlic cloves, turmeric, zest and juice of 1 lime and a banana. You have to try it. 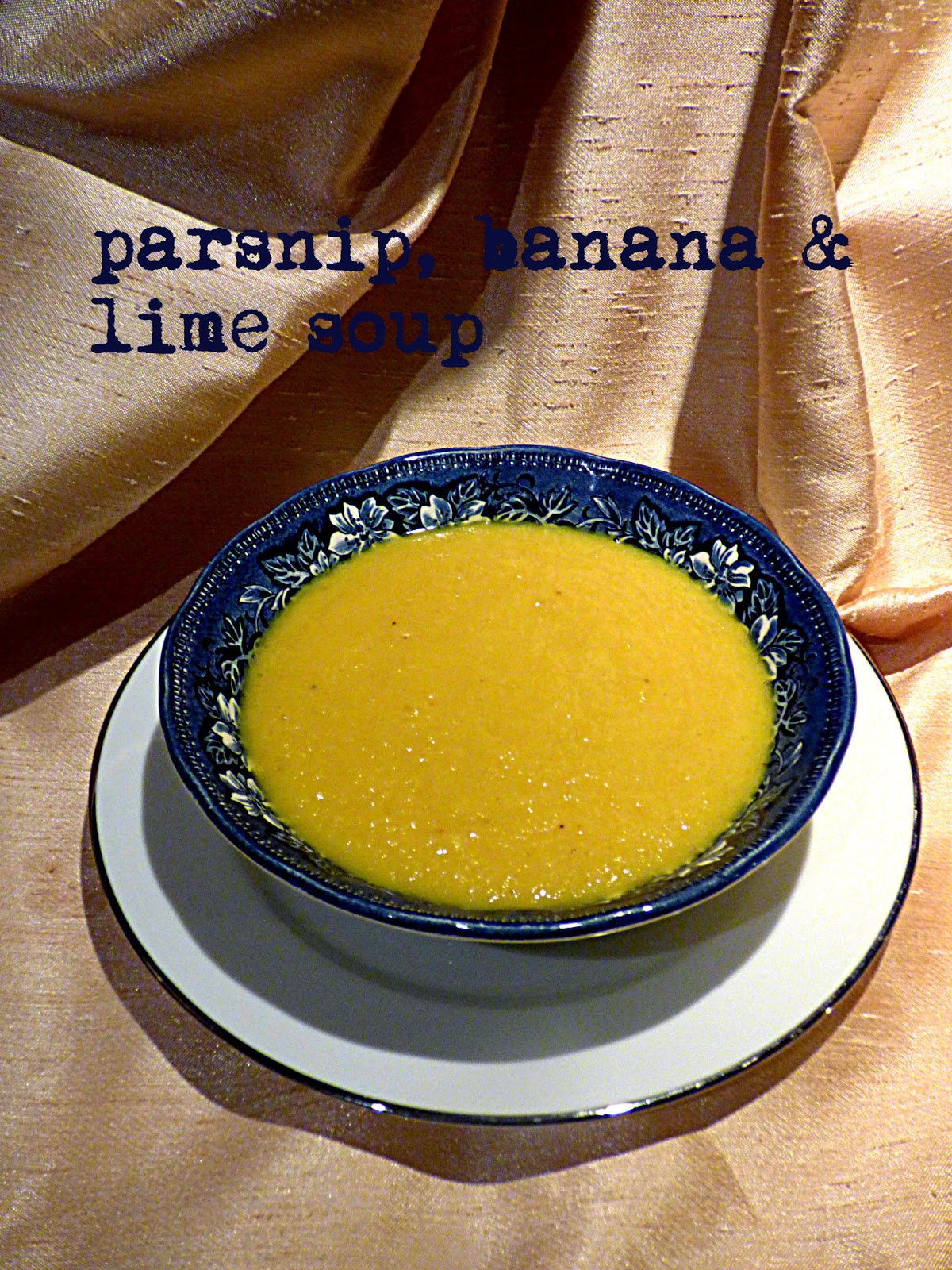 Mushroom & rosemary soup is a classic soup, with a twist, as it included an apple as one of its ingredients. These are the ingredients which went into the soup: a punnet of mushrooms, celery, onion, garlic cloves, carrot, balsamic vinegar and rosemary. I usually add a potato or some rice, when cooking a mushroom soup, and it was the 1st time I tried it with an apple. 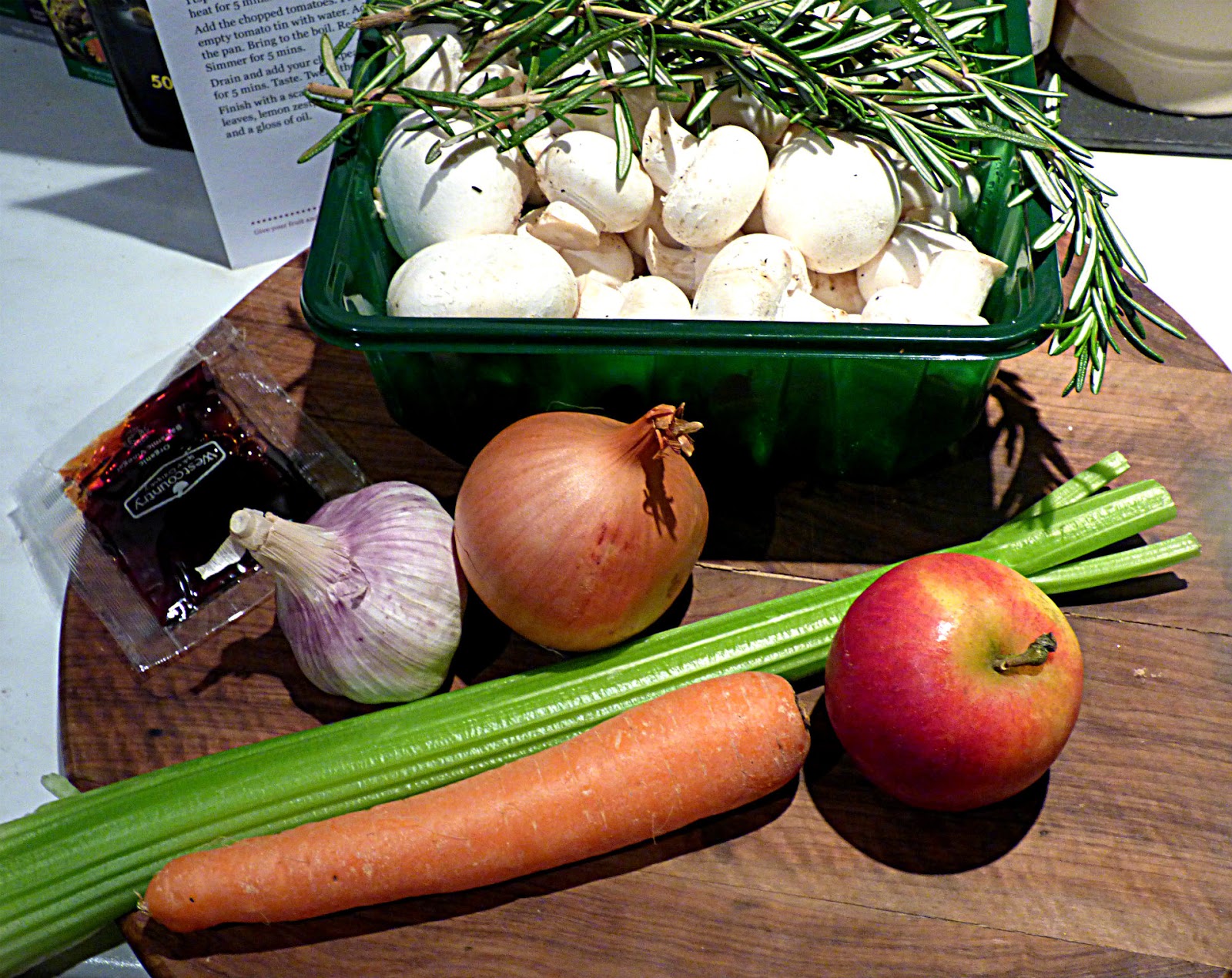 The earthy flavours of mushrooms were enhanced by the fruity note from an apple and rich acidity from balsamic vinegar. It was an interesting recipe, but I still prefer to add a potato instead of an apple.

The last of the three was a Moroccan chickpea soup, another colourful dish with lots of flavours going on.


As I was editing the photos for this post, a new soup was simmering on the cooker from my 3rd Superb Souping box - Watercress, Salsify and Crispy Garlic Soup. Black salsify looks quite ugly, like a dirty rough-skinned carrot. But under that rough skin there's a delicate soul. I have tried it before, in a salad (see my old post Black salsify and wild mushrooms warm salad)

The soup recipe included onions, carrot, black salsify, celery, juice and zest of one lemon and watercress, with garlic thinly sliced, fried and scattered over the soup. Very flavourful and quite unusual. I liked the addition of crispy garlic, though I think the delicate salsify is a bit overwhelmed by the peppery watercress and garlic. Still, top marks to A&C for developing varied recipes every week. I still have to cook two more soups - Bloody Mary and Asian apple beet soup.

Each soup box costs £12.50 plus delivery. It includes all ingredients, from vegetables to fruit, from herbs to spices and sauces.

Have you tried a Superb Souping Box?


Disclaimer: I haven't been asked to write about soup boxes. All products have been purchased by me.
Posted by Galina Varese at 20:22:00