Let me tell you first that the correct Oxford transliteration for the Russian word борщ is not borscht, but borshch, but I will use the spelling above so as not to confuse my readers.
There are as many variations of borscht as there are cooks in the former Soviet Union. Its origins are Ukrainian, but it has become a staple dish of Russia. Some like it hot. Some prefer a cold version. It could be meat-based, or meat-free. 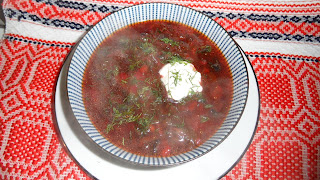 Several years ago The Guardian dedicated a whole article to the Russian borscht, you can still find the article here (it is well written and is worth reading).

"...Borshchland lives on. Recipes, like birds, ignore political boundaries. Just as the British empire still has a culinary pulse, beating in a curry in Scotland or in the mug of builder's tea with sugar and milk you are handed in some roadhouse on the Karakorum Highway; just as the Ottoman empire breathes phantom breaths in little cups of muddy coffee from Thessaloniki to Basra; so the faint outline of the Tsarist-Soviet imperium still glimmers in the collective steam off bowls of beetroot and cabbage in meat stock, and the soft sound of dollops of sour cream slipping into soup, from the Black Sea to the Sea of Japan and, in emigration, from Brooklyn to Berlin" (James Meek)


This is one of the versions of borscht that I cook when I have beets with fresh leaves, for example, when they are delivered in the veg box from Abel and Cole. It boasts a multitude of flavours. 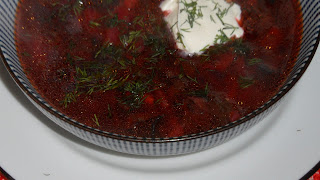 Chop the beets and add them to the frying pan with one teaspoon of the sunflower oil (you can use a mild olive oil as well, but the sunflower oil would give you a more authentic flavour). Cook on low for about 10 minutes, stirring occasionally. They won't be cooked yet, but will acquire a sweeter deeper flavour. You can skip the frying part and just chuck all the chopped veg in the pan to cook in water, but that's how my Mum taught me to cook this soup, and I find that omitting this step gives you a less exciting fusion of flavours. After ten minutes, remove the beets from the frying pan and put them in the big pan where you'll be cooking your borscht. 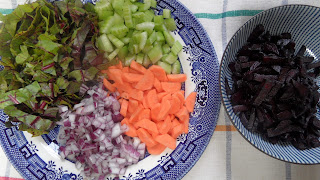 Repeat the same with the chopped carrots and celery, they can be cooked together. Again add them to the beets.
Chop the mushrooms and fry them with the chopped onions, spring onions & garlic. Again add to the rest of the veg in the pan. Slice the tomatoes, add to the pan. Pour in water, bring it to the boil, add two tablespoons of Heinz ketchup (my secret ingredient). Cook for at least 35-40 minutes on low before adding chopped potatoes and beetroot leaves, then cook for another 10 minutes.

If you don't like mushrooms, add a chopped sweet pepper instead. Just don't forget the soured cream. 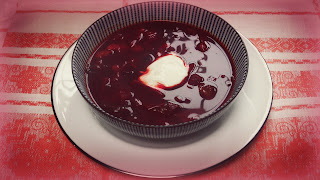