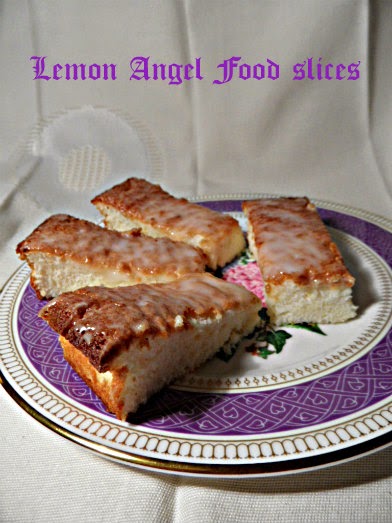 I've bookmarked a few Angel Food recipes found on Pinterest, those which promise a light fluffy sponge by mixing a cake mix with just one or two extra ingredients.
As it's impossible to find Angel Food cake mix in the British supermarkets, you can buy them online or find in a deli. I bought a box of six from the devil incarnate also known as amazon. I used Duncan Hines brand, but I suppose any other brand of Angel Food cake mix would do. The cake mix doesn't require anything but water.
The original pin which I used as my reference brought me to the post - see Two Ingredients Lemon Bars - it asked for a tin of lemon pudding filling, another American product which is not easily available in the UK.
Thankfully, Waitrose sells a powdered Green's Lemon Pie Filling. It comes in a small box containing two sachets, and requires an egg yolk and water.

First mix the contents of one sachet of lemon pie filling with the water (280ml) and 1 egg yolk, beat them together, and stir over a pan of boiling water for about 3-4 minutes. It only needs to get creamier rather than cooked to a thick consistency, as when you cook it as a separate dessert. Let it cool a bit.
In a big bowl mix the Angel Food cake mix with lemon pie filling. Add the juice and zest of 1 lemon. It immediately fluffs up and grows in size considerably.
I used two brownie trays (medium-sized) for baking the angel slices. Plus I had enough for six cupcakes. Bake the slices/cupcakes at 180C for about 25 minutes.

Remove the trays from the oven, let them cool before turning out onto a flat surface.
Mix the icing sugar with the juice of one lemon and cover the big cakes with it. Then slice into smaller size portions, a bit like Mr Kipling's angel or lemon slices.

The resulting slices were delicious, very light, airy, fluffy and moreish. You wouldn't believe that they were made, using two packs of mixes. I will definitely be baking them again. Next time I will try to use an orange zest and juice, or a mix of lemon and orange. 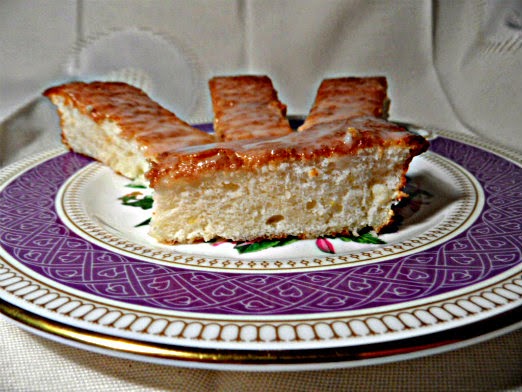