How Frozen saved my sanity at Christmas time

They say Don't build up high expectations for a perfect Christmas day, and I don't. In fact, I am hardly an optimist, I tend to expect the worst. And sometimes those expectations of the worst actually pale in comparison with the reality.
It so happened that back in summer my husband managed to convince me that we should spend Christmas with his parents in Italy. We booked the tickets way in advance, then had to change the return flights for a totally extortionate amount of money. We flew with BA, and incidentally, the food was quite atrocious. If you didn't fancy a chicken sandwich, there was absolutely nothing else. Good saving for BA, as from four of us, I was the only one to try the sandwich. And the coffee was like dishwasher dregs, vile. But that's just a minor irritant of the whole stressful week of the season to be jolly.
With Sasha's autism, everything has to be planned in advance. I took with us all his meds, and food too, like tuna pate and Warburton's sliced bread, because he wouldn't eat any of the wonderful Italian artisan breads and their sliced bread is not very good. We packed his favourite books and DVDs, snacks and of course his ipad. Travelling is always stressful for everyone, but when you have autism, it is treble-hard. Yet Sasha loves being on the plane. It's the airports and waiting that he finds the most difficult to cope with. The crowds and noise make him upset. But we managed relatively well for all these years to travel with him, and were hoping this time would be more or less the same.

I prepared myself mentally and psychologically to any possible eventuality. But the reality turned to be much worse than my expectations.
Sasha fared relatively well through the ordeal of the check-in and passport control, we have to hold his hand as he tries to escape. It's as if he has this strong urge to run somewhere, he knows not where himself. And being almost as tall as me and strong, it is not easy to keep him in one place. Later we had a semi-peaceful lunch at the Giraffe's at Terminal 5. Sasha watched the crowds from above, turning his back to us, and that was the symbol of the week to come. 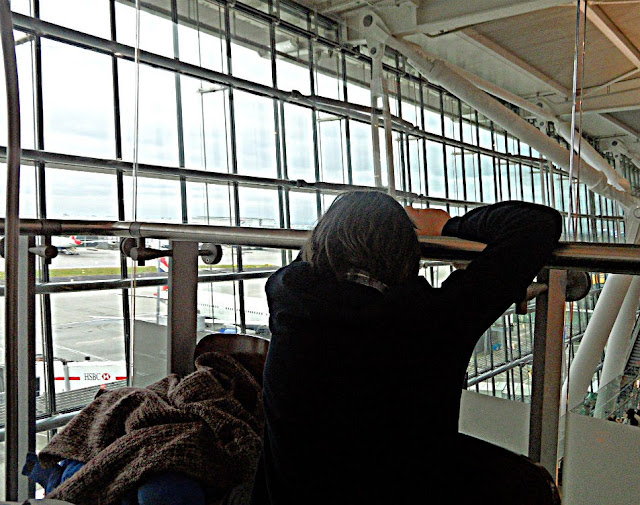 He spent most of the time in Italy, hiding away, whenever we tried to be with him, he would withdraw into another room to escape our company.
I knew he wouldn't sit with us for Christmas lunch, and I found it very sad that on such a day my beloved boy didn't want to be with us. He was more content to spend the day in his room, with his ipad and tune pate sandwiches and biscuits.
Sasha was very moody and it didn't help that the Internet connection was very poor. Thanks Vodafone for the lousy service - 40 euros for a week of rubbishy connection.
He used to enjoy our walks around the town centre, visits to the book shop and cafes, but this time it felt like he wasn't happy anywhere we went, and this was so sad. I felt like I have failed my son completely by subjecting him to a trip he didn't want.
The whole week we were walking on the eggshells so as not to trigger any meltdown.
I was bracing myself for the flight back. We travelled to the airport in a taxi, and Sash was annoyed with the chatty driver and kept pushing me, as if it was my fault that the driver liked to talk.
We planned to get to the airport with just a spare hour before the flight so that we wouldn't have to spend any extra time there.
All the hell broke loose, once we reached the final boarding area. Sasha had a meltdown of Gargantuan proportions. He screamed, he cried, tears streaming down his red cheeks, he pushed us, trying to run somewhere. God, it was awful. People were staring, not without compassion but obviously dreading to have a neighbour like that on the flight. Two police women came up to us to ask what was going on. It was a grim moment indeed. We were so worried that we wouldn't be allowed on board with such a distressed child. We split the passports and boarding passes. Eddie and I went first, my husband stayed behind with Sasha to be the last ones to enter the airplane.
Thankfully, by the time they got in, Sasha calmed down. He was a total angel during the flight, and kept kissing my husband on the cheek, apologising in his silent way for the stress he caused.
I know he understands the limitations his condition brings along, but he cannot control his outbursts.

And it is with a sad heart that I decided that we won't be travelling together again. Ever. When Eddie is older, I will let him travel to Italy with his Dad to see his grandparents but Sasha and I will stay at home.

During our week of "Italian holidays", when I could hardly relax for a minute, it is small things in life that kept me sane, like a quick cup of latte in the local cafe, beautiful streets of the old Renaissance town decked in garlands of twinkling lights and Frozen.

I resisted buying a Frozen DVD for a long time, thinking that with two boys I wouldn't need it and that it was only a girlie stuff. Yet Eddie kept mentioning it, as his mates kept having Frozen-themed birthday parties. I bought the DVD, and squirreled it in the suitcase to give to Eddie as a Christmas gift. We watched it first after a Christmas lunch (which left me quite sad, since my older son didn't want to do anything with it). We watched it probably twice a day every day while staying in Italy. By now I know most of the lyrics by heart, and Eddie and I keep singing bits and pieces aloud. I swear its gentle humour saved my sanity in those days, when I was often on the verge of tears.

If only there were trolls who would have fixed our frustrations and angst, and made my boy happier.