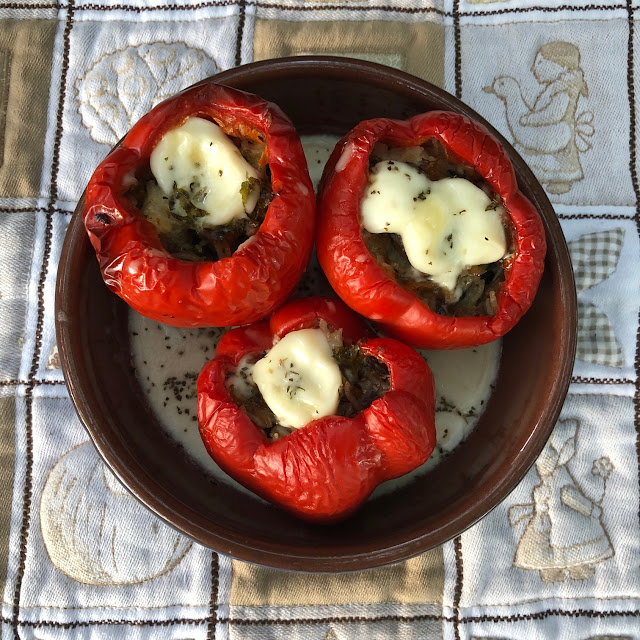 Stuffed peppers have always been one of my favourite comfort foods. I remember as a child going into my auntie's kitchen garden, where she grew most flavourful sweet peppers (as well as fiery little chillies, which would make you gasp if you were silly enough to have a bite of a fresh one), and picking a few for dinner, along with big-sized beef tomatoes and a bunch of fresh herbs.
My grandma and auntie were great cooks, and in summer the smell of the food cooked in the summer kitchen would waft around the garden, making your mouth water.
They lived in a small town in the South of Russia, and I enjoyed visiting them. For me, a city girl, their town was full of promise and discoveries, including a local speciality - a blue ice cream named after the river Don. I loved going to the market and seeing local produce, heaped up on wooden tables. Ah, memories, memories...

Stuffed peppers are also one of my Mum's signature recipes. She cooks them in a deep pan, simmering in soured cream and herbs sauce. She makes different versions - a mix of rice and minced meat with lots of herbs for the meat eaters, or rice and mushrooms for Lent days. 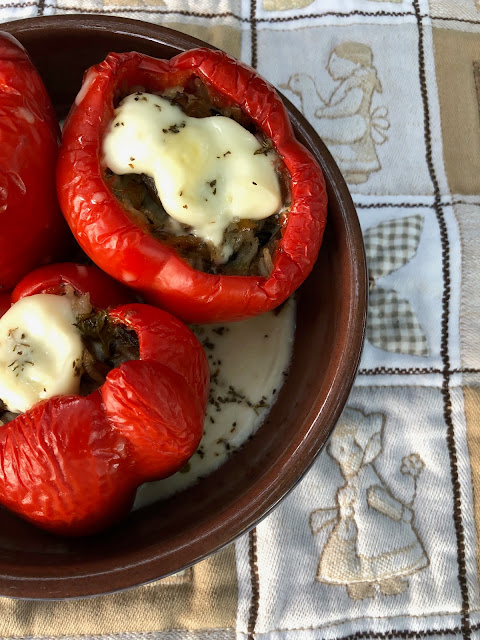 In this recipe I use whole peppers as vessels for stuffing. I like to use a mix of mayo and soured cream, but as this recipe is a vegan one, the soured cream is not included. I have tried soy and other dairy-free yogurts, but they don't have the same level of acidity as the soured cream.
If you're not a vegan, mix the mayo with soured cream or thick Greek yogurt.

First cut out the tops of the sweet peppers and remove the seeds from inside.
Pre-cook the peppers in salted boiling water for 5-7 minutes. You don't have to precook and just roast the peppers in the oven with the stuffing, but it will take much longer.
In a medium pan heat up 2tbsp rapeseed oil and fry finely chopped red onion and grated carrot, stirring frequently. Cook for about 5 minutes, then add the chopped mushrooms and 1tsp vegan mayo. Season with sea salt and black pepper.
Add the precooked rice and mix well. 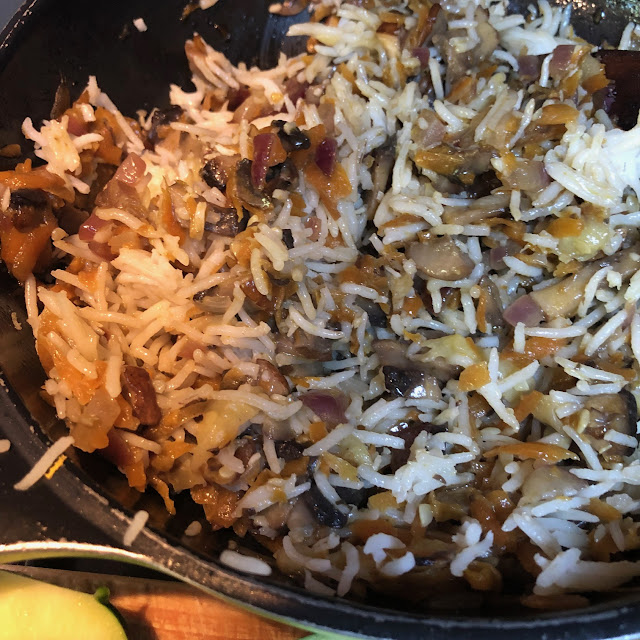 Spoon the rice and mushrooms mix into the peppers, and top up with a dollop of mayo. Place the peppers in a medium deep ceramic or roasting dish. 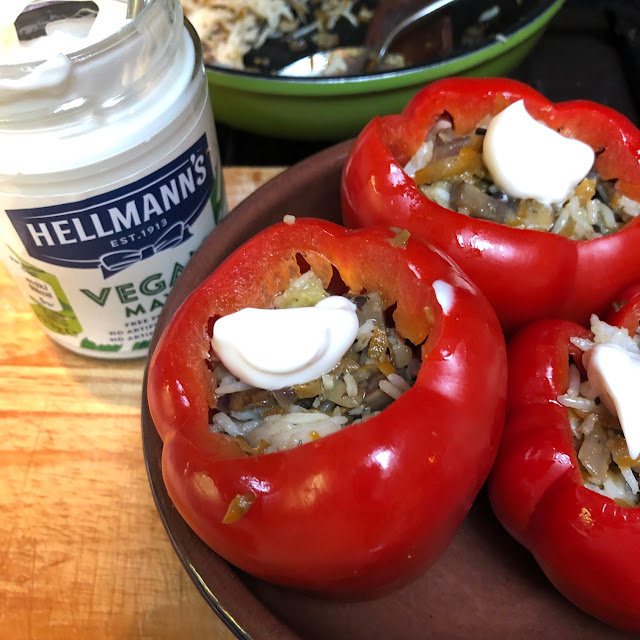 Put the dish in the oven preheated to 180C.

In a small bowl mix the remaining mayo with lemon juice and herbs, pour it over and around the peppers.
Cook for about 15-20 minutes. 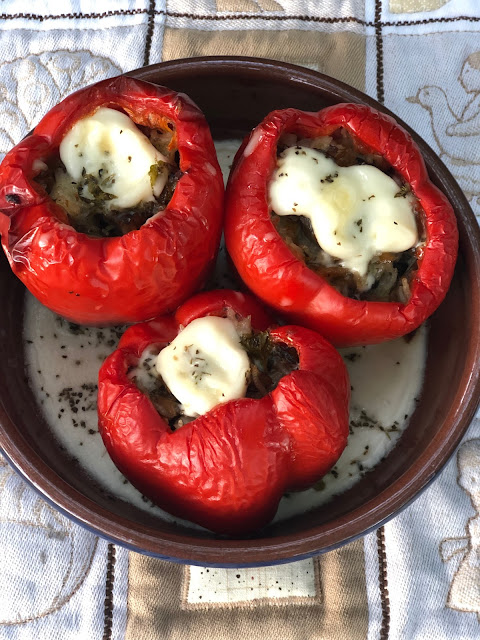 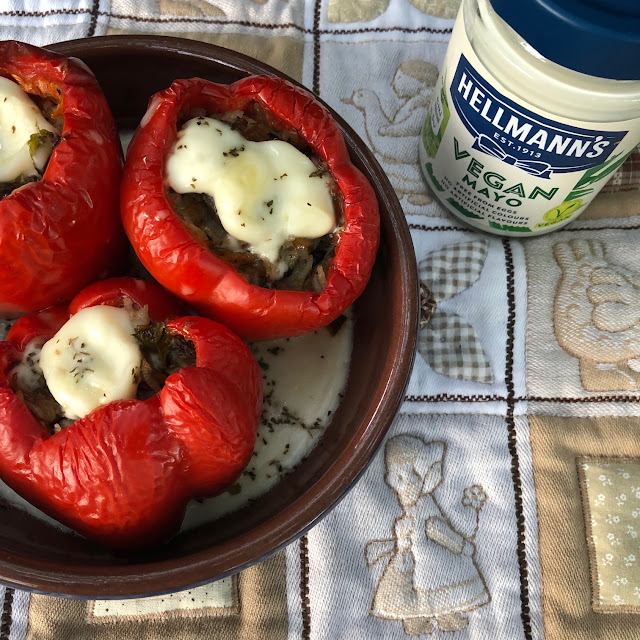 I've first tried Hellmann's vegan mayo a couple of months ago, and since then bought it a couple of times. It is creamy and tasty, and you won't guess it's dairy-free.
It's definitely a perfect alternative to a dairy-based mayo. 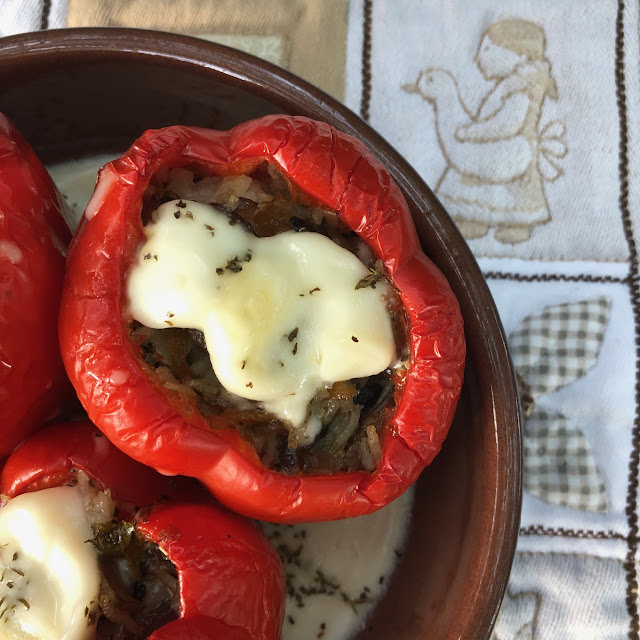 If you're a fan of Hellmann's Vegan Mayo, you might want to enter a competition which is running until the 28th of July.
I enjoy entering creative cooking competitions, and wanted to share the competition in case you might have missed it.

1. This promotion is open to residents of the UK aged 18 or over except employees of the Promoter, their families, agents or anyone professionally connected with the promotion.

4. There are three prizes in total. The overall winner will receive 1 x £1,000 in the form of a wire transfer, the second and third winners will receive £150 each in Amazon vouchers; and 150 additional randomly selected eligible Entries will receive a £5 Amazon voucher, up to £10 per winner (£5 voucher excludes challenge winner and runners up).

For the full T&Cs please visit the Facebook group, as there are 24 clauses of the promotion.

I really wanted to alert you to the competition, as it's exactly the type of creative competition I wish were more widely available.

If you do join in, I wish you all the best. And I'm keeping my fingers crossed as well.

In case you are not sure where to buy Hellmann's Vegan Mayo, I found it in Sainsbury's locally, but it's also available in Tesco, ASDA, Amazon Pantry and Ocado. 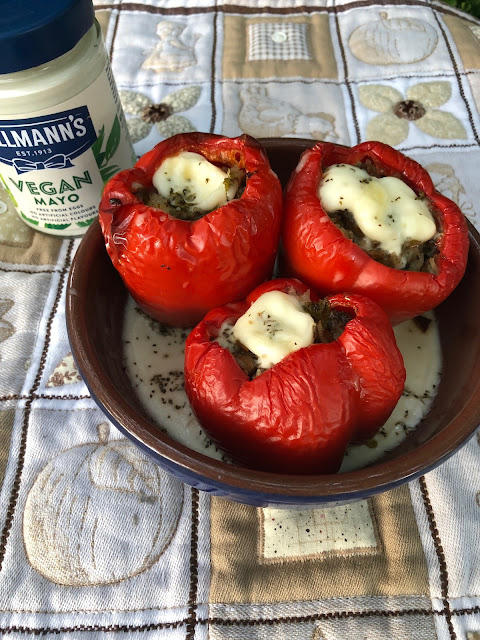