A midterm break has started with an unpleasant stomach bug for my younger one. Today we're both tired and sleepy after a sleepless night. Fingers crossed, the rest of the week will go without adventures of this kind.

Rhododenrons have changed their colour from bright pink to almost white. It happens every year, and makes me wonder at them every year too. 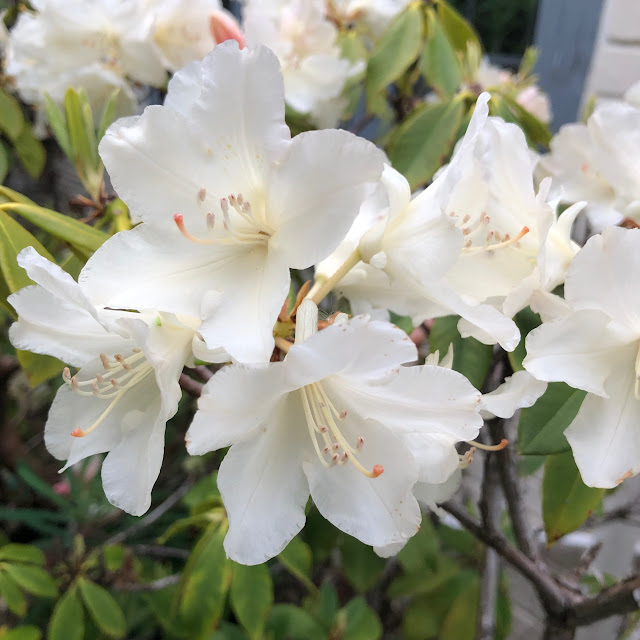 A quick coffee after the school run at The Blue Boar, with the light refracted through the prism beads of the lantern by the window. 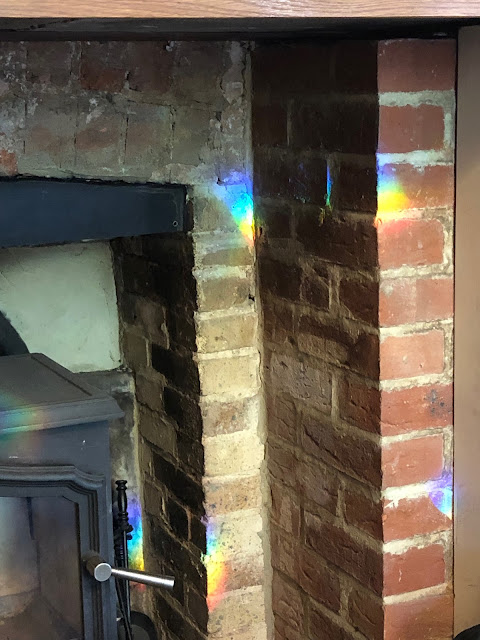 On Tuesday it was Sasha's respite night. He was very eager to go, and was all smiles from the early morning. He enjoys going there. Eddie and I decided to go to Oxford after school.
We went out for dinner to Pizza Express. I haven't been in that place for about 20 years, and I wanted to show Eddie the old building. It dates back to the 12C, and is so beautiful inside. In a way, it's a pity that it's a pizza place, and not some kind of a history museum. 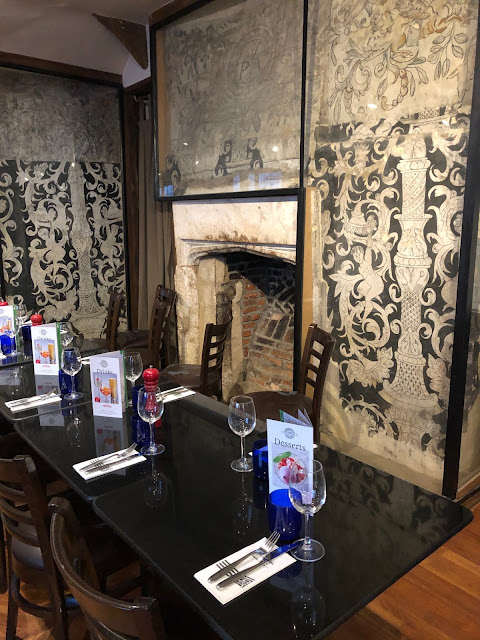 I visited John Lewis while Eddie and his father played table football, and bought myself a hat. I had a £20 voucher which I won at the Twitter party organised by BritMums about a month ago. The hat was £35, and there were two versions, with the blue and pink under the brim. I liked both, and pink is not my usual colour, but I thought it refreshed the skin tone more.

I wore it on the school run the next morning. 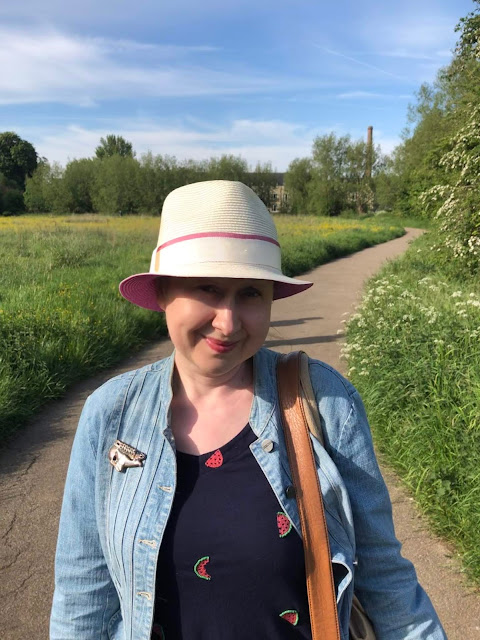 On Thursday Eddie's current and old schools were doing a May Dance on the Church Green. I took lots of photos and videos which I cannot post on social media.
It was a hot afternoon. Children danced traditional dances, and the little ones also performed the Baby Shark dance routine with great enthusiasm, which made everyone smile.

I also took photos of St Mary's church, with the aeroplane passing by. 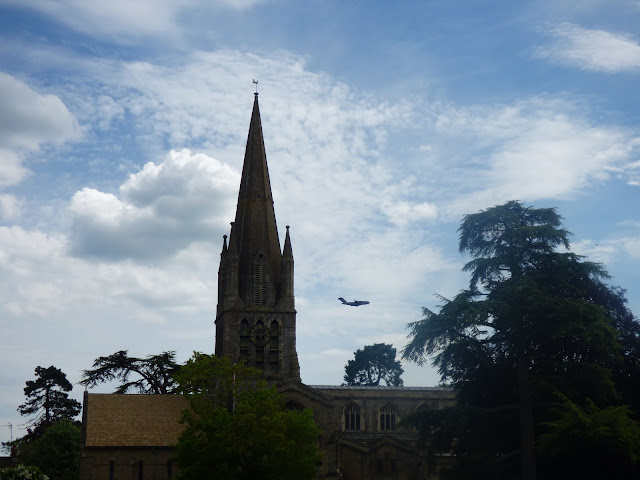 Eddie wasn't feeling well after the dance, and by Friday morning he was quite poorly. I think he got a stomach bug. I emailed school, and I bet they thought we took him out of school to go on holiday, as they didn't even acknowledge my message.
Eddie was upset not to go to school, as he missed his chess club and also the carer's club party, which took part at the last hour of school. He was counting days to that party, poor thing.

Children had to bring posies to the May dance and after the performance parents were offered to buy the posies. I bought this pretty purple posie, which smells lovely. 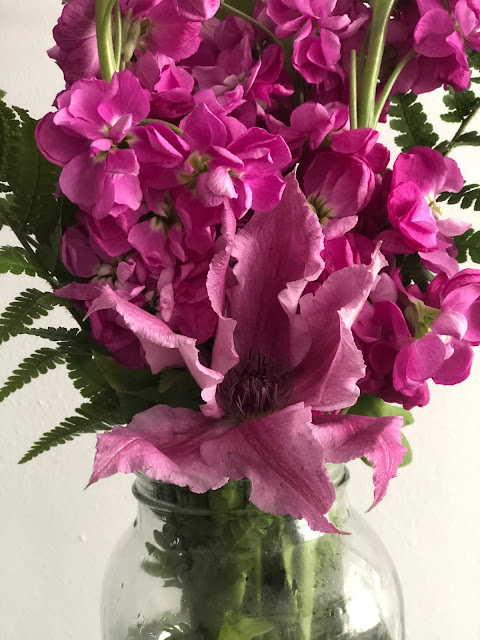 Today is a bit of a zombie day for me. Eddie had hardly slept, as he was sick through the night, and I had to change the bedding several times. Then we woke up Sasha at 5am, and after that it was no much sleeping going on in the house.
Eddie and I stayed at home today, he's slowly getting better. Hope he'll be well enough to get out of the house tomorrow.

The creamy white roses are in full bloom now. The garden smells so sweet. 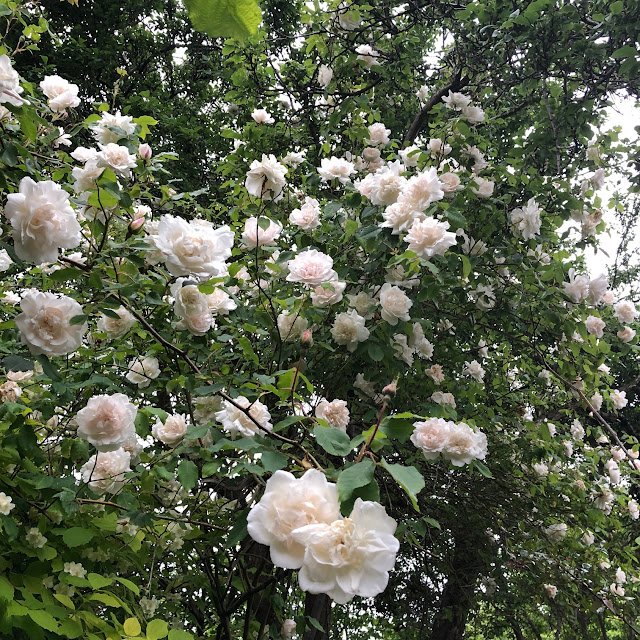 You are invited to the Inlinkz link party!
Click here to enter
Posted by Galina Varese at 20:09:00