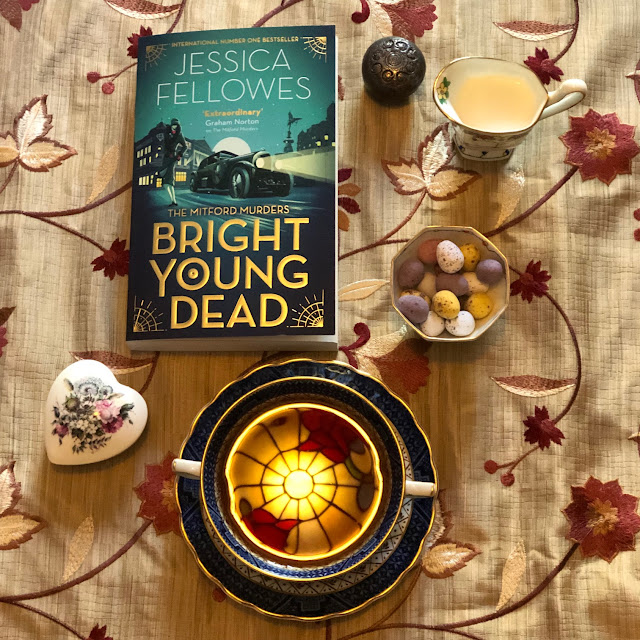 They say, Don't judge a book by its cover. As a metaphorical phrase it rings true, but when it's related to the actual books, it's often the cover that draws me like a magnet.
I appreciate the art of book covers, and for me, it's commonly the cover design which makes me pick a book in a bookshop or a library.

The cover for Bright Young Dead by Jessica Fellowes (Illustration - Garry Walton/Design - Hannah Wood) is a stylised design, reminiscent of the 1920s art deco posters. It also makes you think of Poirot and the Jeeves and Wooster book & TV series (with the wonderful music scores).

Bright Young Dead is the 2nd installment in the Mitford Murders series. I haven't read the first one, but the second book reads perfectly well as a standalone.
I'm not obsessed with the Mitford sisters, but have read enough about them to know who is who, and how their lives progressed. The lives of six sisters have been an inspiration for many biographies and fiction books.
Jessica Fellowes' story is loosely based on the Mitford family.

The story is set in 1925, when young Pamela is turning 18. Her elder sister Nancy is throwing a costume party for Pamela - and for her it is just an excuse to invite all her London chums who are known as Bright Young Things.
The young crowd are all pretty shallow: think Bertie Wooster, only rather malicious and pretentious. They organise a treasure hunt which was en vogue at the parties of the period and which makes you ask yourself just how glib, trivial and simplistic their entertainment was. Well, they also do drugs and drink themselves silly.

Louisa Cannon works for the Mitford family in the nursery but also acts as a chaperone for the older girls (not sure how likely this is supposed to be). Louise herself is a former criminal (without reading the first book, I don't know the backstory as how she gained her current position).

While attending one of the London events with the Mitford sisters, Louise meets Dulcie Long, who works as a maid-cum-chaperone to another aristocratic family.
They bond over their unusual past. "Perhaps she had been drawn by the girl's London accent, invoking a sisterly feeling. Or it might have been the vanity of liking someone because they were the mirror image of oneself... As the two young women assisted the cook with the dinner, they exchanged the snippets of gossip and stories of their family's demands and eccentricities".
On her free evening Louisa ventures with Dulcie to the Elephant and Castle in Southwark, the pub frequented by Alice Diamond and her gang, The Forty Thieves.
Dulcie's been involved with the gang in the past but wants to leave. To do that, she needs to pay off.

Louisa seems to have a pretty good life, and is free to do things which she would have had no time or opportunity to do. I've read memoirs of maids and servants in the aristocratic families at about the same period of time, and their lives were definitely more restricted.

Knowing Dulcie's background, Louisa makes the most stupid move, by helping her friend to meet privately one of the guests in the party. Adrian Curtis is the son of Dulcie's employer.
The meeting between the two doesn't go well.

And when Adrian is found dead outside the bell tower next to the Mitford home, Asthall Manor, the police are quick to identify their culprit - Dulcie.

Louisa is shocked, but doesn't believe that Dulcie is the killer. She decides to prove Duclie's innocence.

As a parallel story unravelling in London, Sergeant Guy Sullivan and Constable Mary Moon are eager to prove their mettle and arrest the notorious Alice Diamond and her Forty Thieves.
Mary Moon is one of the first females employed in the police.

This cozy mystery set in the manor house and London fashionable as well as seedy circles captures the era where the glitz and squalor are only a step away from each other. It will appeal to the fans of historical mystery genre and those who enjoy the downstairs-upstairs antics. 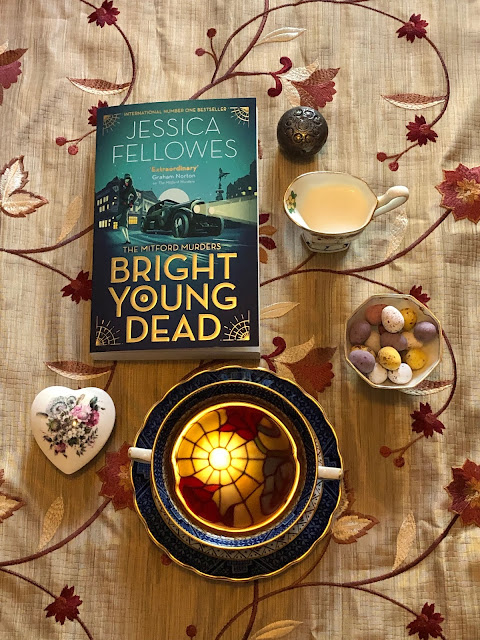