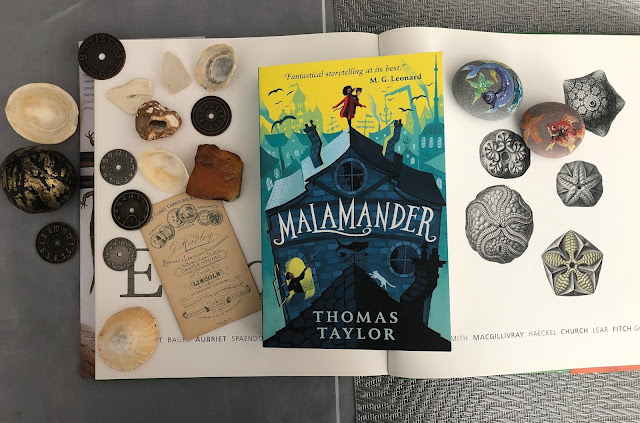 "I lean in closer too, wondering what I'll see, and what's expected of me. The image starts to fade in and out, but then I see it: something darker than the shadows, crouching on the pier. Something big. It begins walking - no, creeping -towards the diner. It seems human, until...
"Is that a tail?" I gasp.
Two lamp-like orbs blink in the darkness.
"Are those eyes?"
"Then you do see it?" Lady Kraken grabs my arm. "Mr Lemon, tell me we're not dreaming!"

It's not often you start reading the book, and get hooked from the very first pages.
Malamander by Thomas Taylor grabs you by the hook (or should that be a boathook?!) and keeps you thrilled till the very end.

Herbie Lemon is the Lost-and-Founder at the Grand Nautilus Hotel. He looks after the lost property, and lives in the hotel cubbyhole.
Herbie was found on the beach, in a crate of lemons, with his memory wiped out. He didn't remember his name, and was named by the hotel staff as Herbert Lemon.

One day he finds a girl scrambling through his window. She asks him to hide her. The ugly and frightening Boathook Man is after her.

Twelve years earlier baby Violet was found abandoned in the hotel, her parents vanished.
Violet hopes Herbie will be able to help her find the truth about her parents. Since he's the Lost-and-Founder, she reckons he's good at reading clues, like a detective.

And thus their adventures begin, amidst the stormy wintery atmosphere.
"When sea mist drifts up the streets like vast ghostly tentacles, and saltwater spray rattles the windows of the Grand Nautilus Hotel. Few people visit Eerie-on-Sea then. Even the locals keep off the beach when darkness falls and the wind howls around Maw Rocks and the wreck of the battleship Leviathan, where even now some swear they have seen the unctuous malamander creep." 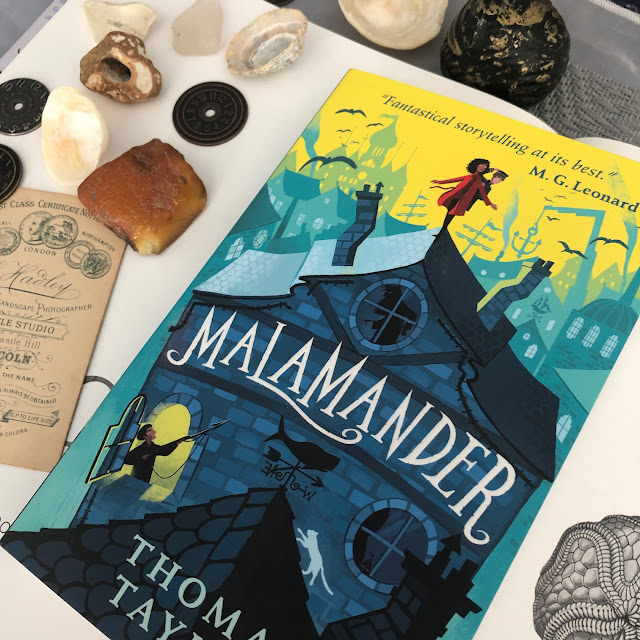 Herbie and Violet make an awesome team. She's impulsive and foolishly brave, he's more sensible and thoughtful. Both orphaned at an early age, they have great mysteries of their backgrounds in common.
They are the perfect opposites of each other in personality
The daring duo are the most endearing protagonists, who you sort of want to adopt (if you're a grown-up).

While trying to solve the enigma of Violet's parents' disappearance, they go to the Eerie Book Dispensary (a place I'd love to visit). This is not a common book shop. Books are dispensed by a mechanical mermonkey (part-monkey, part-fish).
"A library will lend you the book you want, while a shop sells it for a price. In this place, however, it's the book that chooses you."

The book chosen by mermonkey for Violet is Malamander, a famous local legend and a tragic story of old Captain K and his battle with a sea monster.

Every step Herbie and Violet make, every clue they find, all discoveries lead them to the inevitable conclusion that the mystery of Violet's parents and Malamander's story are closely connected.

The author clearly had great fun, creating his characters. Most of them have sea-related names. There is a pompous hotel manager called Mr Mollusc. Lady Kraken is the recluse hotel owner and the grandaughter of the dreadful Captain Kraken (a nod to the famous Nordic sea monster).
The hotel receptionist is named Amber Griss (=ambergris, or a secretion of the sperm whale).
You can get the best fish and chips at the Seegol's Diner (which sounds like Seagulls).
Mrs Fossil is the eccentric and rather irresponsible beachcomber who wears three hats and who brings a calamity in one of the other character's lives unintentionally, just because she's so engrossed with her hobby.
Sebastian Eels is a local writer. As Herbie describes him, "He's an author, and a bit of a local celebrity. He's a bit full of himself, too, if you ask me".
Even Dr Thalassi has a marine name (his name is translated from Greek as the sea).

Malamander is a fabulous seaside mystery, for anyone who enjoys a mix of folklore, Gothic horror and magic.

We loved the book, and can't wait for the next installment in the series. 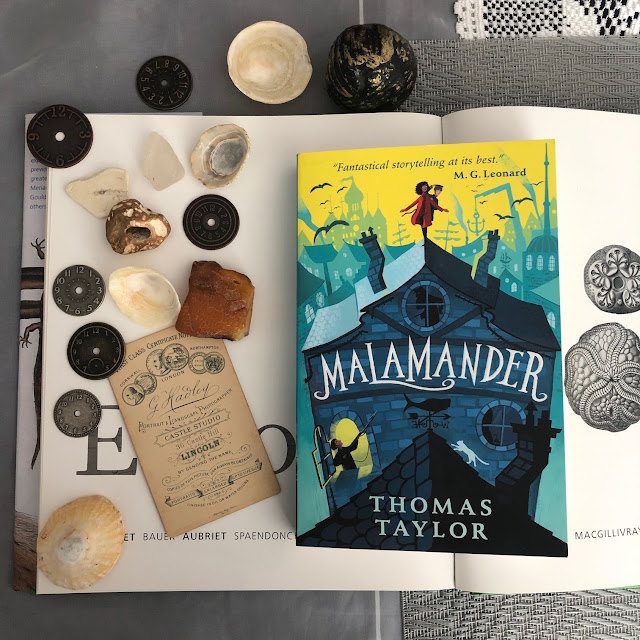