I've realised I have only done one blog post in the last week after the previous Photo diary, and that was prepared in advance. I've not been feeling well in the last ten days or so with a toothache.
Went to the "demon dentist" twice. The first time he put some bio-composite thingy, which didn't help at all, and started crumbling on the same day. I could barely survive the weekend, and asked to be seen on Monday.
Alas, I need to have the root canal work done, which means going back to be tortured again and again. I'm rather peeved with them, as he said looking at the x-ray that there was a tooth problem when they did the x-ray over a year and a half ago. Why the heck didn't they flag it up then? It would have saved me all the pain and expense.
Now I will have to pay £648 on top of the £67 initial visit plus £50 for the x-ray. It might be pretty normal for the private dentist, but if you compare it to my carer's allowance (£268 last month which included £10 bonus for Christmas), this is extortionate.

Last Sunday our favourite Costa was closed for refurbishment. Instead of going to the M&S cafe we decided to try Starbucks. The latte was awfully bitter. I haven't been to Starbucks for over a year, and forgot just how bad their coffee is. Eddie was not impressed with his ham and cheese panino either, as it had mustard inside. 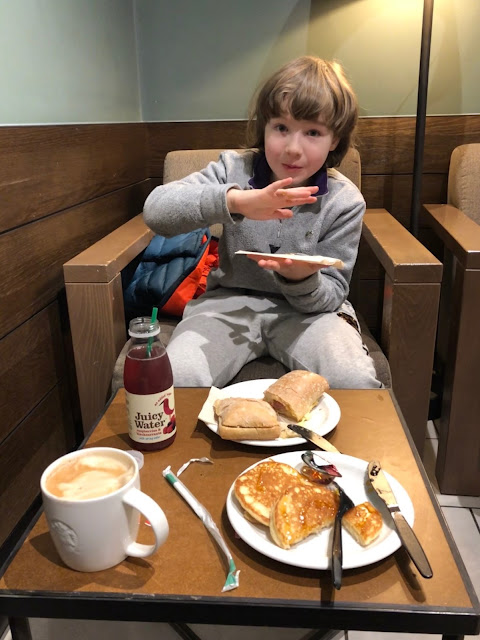 On Monday I was in too much pain after the visit to the dentist. It was Sasha's night away at the respite centre, and the original plan was for us to go to Oxford with Eddie. My husband booked a table at the game cafe, where you can play any board games. It's super popular, and you need to book in advance.
I was way too poorly to travel to Oxford, so my husband and Eddie went without me. They also went to McDonald's afterwards, and I didn't have to cook dinner.
I spent all the afternoon and evening, nursing a sore jaw. I even had a fever. In a way, I'm glad Sasha was not at home, and I didn't have to think of his dinner, reading time etc.

As I was too unwell to take photos on Monday, here are two pics from Tuesday.
I had to pick up a packet from the depot, and walked by St Mary's church. Since our Sasha's obsession with the churches continues, I took a few snaps of the church.
The morning was beautiful, with blue clear sky. 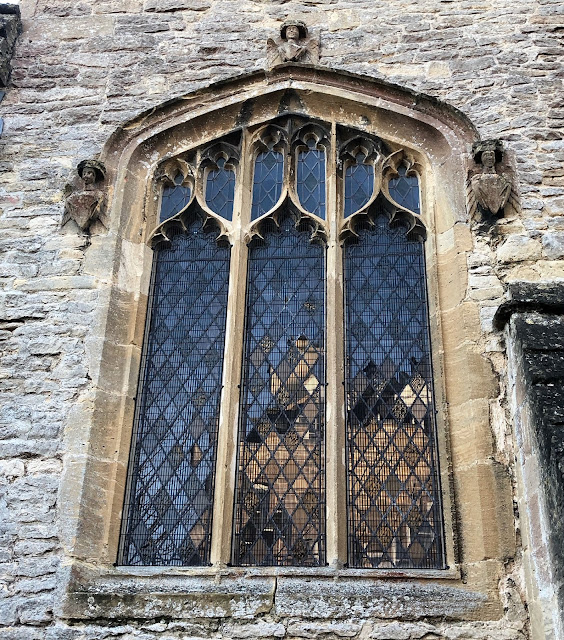 And then, when I was having a late-ish lunch, I saw that it was snowing. Big fluffy snowflakes kept falling, but melted on the ground.
Eddie later told me that his teacher let them all get outside to look at the snow. 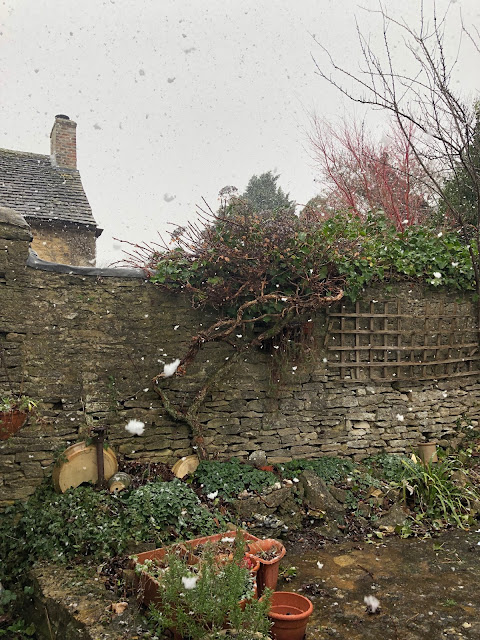 A frosty morning - and a walk through the fields on the way to school, with Eddie's friend. 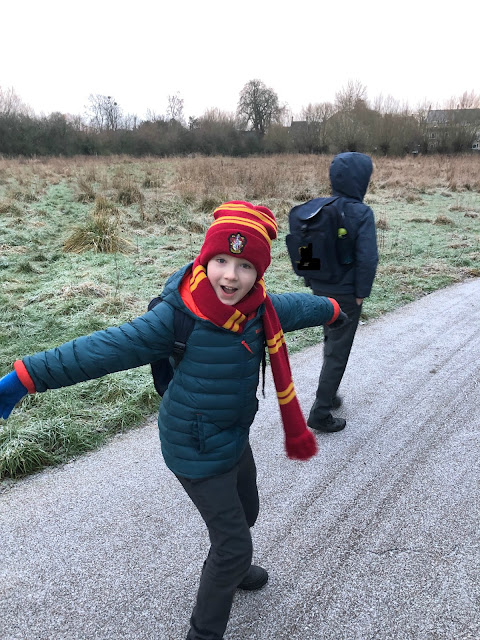 Here is another of my charity shop finds, a Wedgwood cup and saucer, which costed £4 and will come handy for my food and drink styling photos. I also haven't seen a Wedgwood cup like that before.
It's in pristine condition. I will most likely gift it to my Mum, who loves this brand. 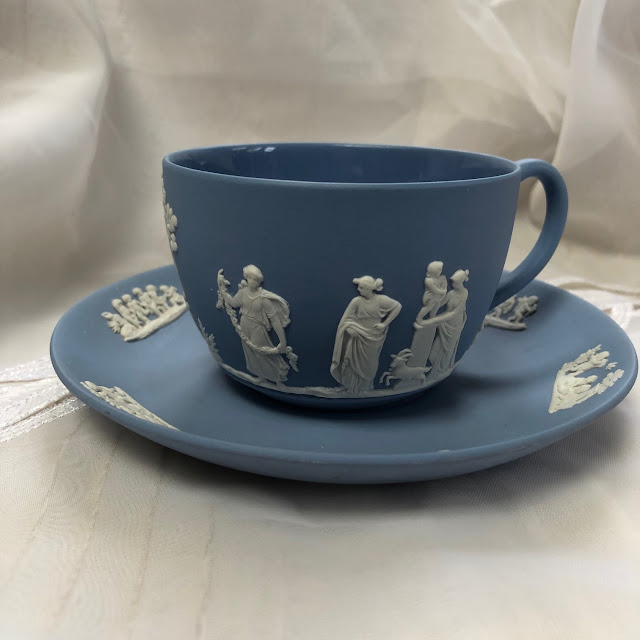 Still not feeling all that well, I thought we'd have an easy evening. With my husband being away, we ordered two pizzas from Domino's, and bought a film to watch on Amazon - The house with a clock in its walls. There were some pretty macabre characters, and those creepy dolls and mannequins, arrgh, they are going to haunt me in my dreams. Quite a few times we kept turning away or closing our eyes, and laughing at ourselves for being such wusses. 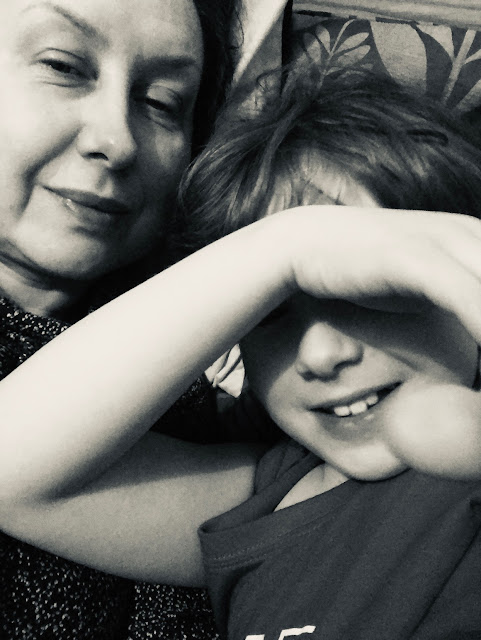 At home all day today, just lazing about. I had a grocery order delivered, and while taking some stuff to the summerhouse, snapped these cyclamen leaves. They seem to spread like fire in the garden. I don't mind, the leaves are so decorative.

Talking of groceries, are you planning to do any food stockpiling before Brexit? I haven't done anything, but reading some discussions on Mumsnet, not sure if it might be a good idea. 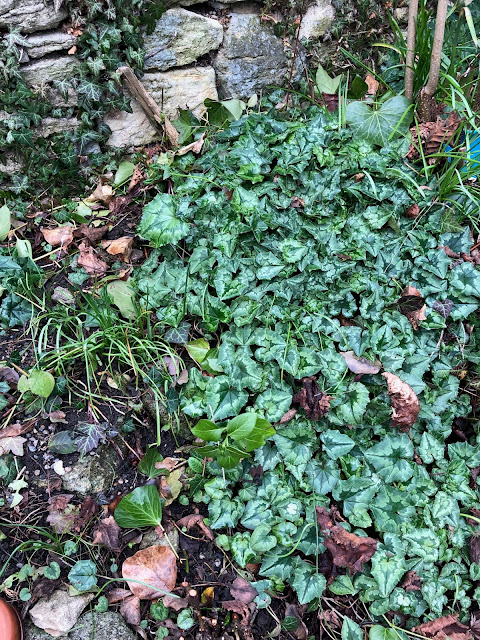