The Midnight Gang by David Walliams 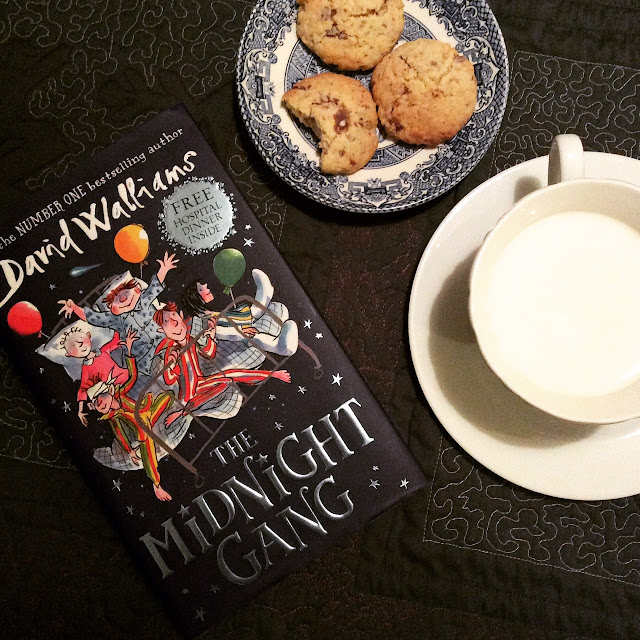 And thus we say Good bye to Tom and the Midnight Gang.
I closed The Midnight Gang (Harper Collins), and my son and I looked in each other's eyes and sighed. We didn't want it to end. Tomorrow we start reading another book by the same author.
Typically I avoid reading books written by celebrities. These days everyone dabbles in writing. I knew, of course, that David Walliams wrote many books for children, but as I'm not a big fan of Britain's Got Talent and don't really watch sitcoms, I never had an urge to buy any of his books. Also my 6-year-old son was a bit young for them, I think. So, it was our first joint foray into the world of David Walliams' fiction.
And now my son is totally hooked, he pointed to the pictures of the book covers inside, saying that he wanted to read this book, and that one, and that one too. Basically, all of them. For obvious reasons known to little boys, Mr Stink (title) appealed to him the most.

I avoided reading any reviews so as not to spoil my own impressions of the latest Walliams' novel.
It is a mix of a humorous fiction with some pretty sad pages which left us very emotional.

The story starts when Tom, a boy from a posh boarding school, abandoned by his parents who are gallivanting from country to country and hardly ever see their child, gets hit by a cricket ball on his head and arrives to the hospital.
There he is met by the Porter. He is so ugly, Tom is terrified.
The Porter is a modern reincarnation of Quasimodo who was abandoned as a baby, looks hideous and is confined to the place where he works - Quasimodo to the Cathedral, the nameless Porter - the Lord Funt hospital.
Soon enough, we learn that appearances are deceptive. The Matron is beautiful but her heart is ugly. The Porter is the most kind person in the hospital.
The children on the ward come from different walks of life. As the story unfolds, we find more about Amber who has broken both legs and arms, Robin who had an eye operation and cannot see because of bandages, a Cockney boy George with a huge appetite who has had a tonsillitis, and Sally who is the youngest child on the ward, who has a terminal illness.
In the night, the children escape on the most creative and inspiring adventures around the hospital.
The story is quite simple, written with a gentle humour. There were some in-jokes as well, for example, when the TV talent shows are mentioned with their sob stories, which made me chuckle.
There is a one-winged pigeon, Porter's pet: "This was clearly not an animal that was going to win a TV talent competition any time soon. That was a shame, as what with having only one wing Professor Pigeon had a great backstory".
We laughed, and we cried. Eddie was sobbing his heart out, when we read about poor Porter being abandoned as a baby. He kept asking me: "Mummy, how could she leave her baby?"
My voice was also trembling when I read about the oldest patient in the hospital, 99-year-old Nelly who thought she was a young child and who expected her Daddy to visit her to the hospital. That totally made me well up.

We were left with some questions as to why none of the parents bothered to visit their children. Also the exaggeratedly mean meals at the hospital. I think Tootsie was meant to be a cheerful-compassionate character, but surely even she couldn't expect a child to survive on one cornflake with a drop of ketchup as a meal?! Where were all the doctors in the hospital? The grown-ups in the book (with the exception of The Porter) are either evil or indifferent to the human suffering.

The book is quite long, but that's also because there are lots of illustrations by Tony Ross  and there is a huge variety of fonts, which crawl, run and zig zag through the book.

Tony Ross' style of illustration is easily recognisable. They are caricature-ish sketches, amusing and quirky. I felt he should have been kinder, drawing little Sally though.

This is the story of compassion and imagination. The final chapters are very touching, and I dare you not to sniffle, reading about a beautiful life lived in one night.

This touching and funny book will make a great Christmas gift for anyone who enjoys children's literature.
The Midnight Gang is currently on offer on amazon (at £5). I have also seen it in Sainsbury's for £5, while WHSmith sells it at £9.99.

Disclosure: We received this book for the purposes of reviewing. All opinions are our own. I don't have amazon affiliate links, the link above is just a suggestion where to buy it at a better price.