Her by Harriet Lane

We're back from Italy, where we spend Christmas with my in-laws. Apart from daily trips to our favourite cafe Leon d'Oro for a dose of caffeine with extra calories and overstuffing ourselves with tasty Italian food, I managed to read a couple of paperbacks which I picked to take with me on a trip.

Her by Harriet Lane was one of the books I won over a year ago, as part of a big pile of thrillers. The blurb on the back looked promising, with the full title reading as "You don't remember HER but she remembers you..." 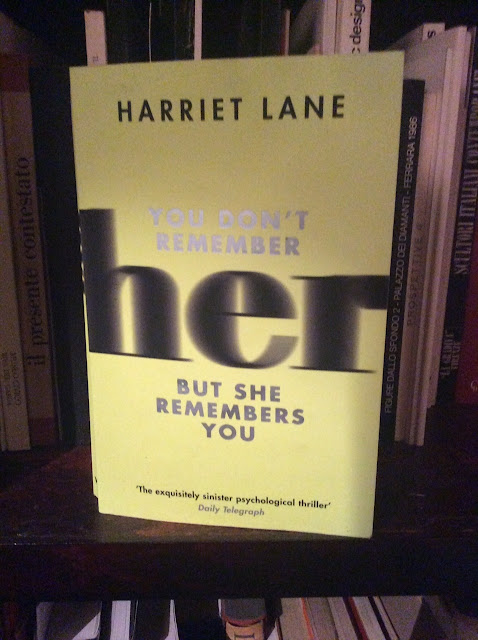 Here is Emma, a knackered mother, who is one of those unfortunate people who always compare their lives to the others and find their own lives lacking all the excitement and joy. I know how tiring motherhood can be, or how ungrateful the daily routines are, but have no much sympathy for self-loathing Emma. Whining and not appreciating what you have is a road to nowhere.
No wonder that when she encounters outwardly polished Nina, who "rescues" her twice in a row, she laps up everything without questioning. She doesn't find any faults with Nina, and is happy to have a sympathetic ear to confide her petty woes.
Emma is pathetic, she truly is. But what does Nina want from her?
One is a psycopath, another is a victim, both are pretty unpleasant.

Two women tell the same story... which drags on and on. Imagine each episode being retold twice, from two different points of view. A very dated literary device bordering on tedious.

I wonder, sincerely, why this book had good reviews.
For example, an endorsement from Observer on the cover of the paperback says: As seductive as it is chilling.
Seductive? I only plodded along, as I was stuck with it as I took only two paperbacks with me to Italy. There is a whole library at home there as well, but I wasn't in the right mood for any classics.

Describing Nina and Emma's husband's book discussions, the author could have been talking about her own book:
"I don't say that I've read and enjoyed it, though I found the final plot twist unsatisfying, as plot twists often are..."
Then there was another remark: "I don't think I like these characters, he's saying: an annoying remark, one with which I can't be bothered to engage". Well, I can engage with this remark, because I disliked both main characters.
Emma, who's whining about the loss of identity. I wanted to tell her: If you found motherhood so challenging, looking after a toddler, why the heck did you think it was a good idea to have another child?
Nina is a self-absorbed, egotistic, controlling psychopath, but supposedly a good artist.
The basis of the revenge is so unconvincing and ridiculous.

I tried to think, why did I find this book so annoying? Is it a very bourgeois setting? All these middle class mini-problems? Will the guests notice the effort, if I iron the cloth napkins? Will my child eat hummus? Which smellies should I put in the bathroom to appease the judges? Oh, and that villa in the south of France is so immaculate, so posh, with sprigs of lavender put on the pillows...

Just wake up to the real world! To hell with your petty grievances!

Did you read anything over Christmas which annoyed you? Or did you enjoy your book?
Posted by Galina Varese at 15:43:00