During our last stay at my in-laws in Italy I was looking through some paperbacks that I left there many years ago, and a magazine cutting with a recipe for Cleverest Ever Cheese Nibbles has fallen out. 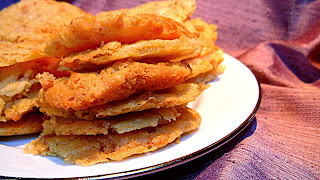 I don't know now which magazine it was, it must have been either BBC Good Food or Somerfield magazine, and it was published some time before 2000, as that was the year when we moved to the States and sent a whole load of our books and belongings to Italy. I read the recipe and liked the sound if it, it is incredibly easy to make and you can involve children in the baking session. 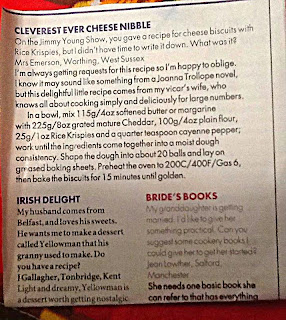 I have only slightly adapted the recipe by using at least half a teaspoon of paprika. I also didn't have 225g of Cheddar, but a smaller block, so I used some grated Babybel to make up the difference.
As suggested, I mixed together the grated cheese (225g) with 115g softened butter and paprika, added 25g Rice Krispies and plain flour (100g). Then just mix it all together, roll into small balls and place on the pre-oiled tray (I used 2 trays). Bake for 15 minutes until golden at 180C. 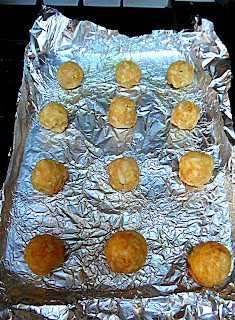 The resulting nibbles were very soft, textured and a bit fluffy. I didn't mind that they were all mismatched, as it only adds to the rustic charm. They will look lovely on a cheeseboard with strong flavoured cheese and pickles. 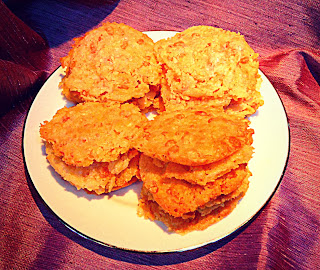 I used a mild Cheddar for this batch, I think next time I will try the extra mature Cheddar and even more paprika. 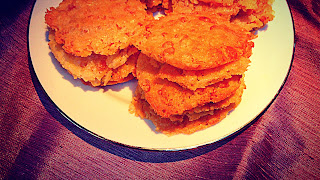