When Justin's Funny Faces Sticker book arrived the other day, I don't know who was more excited about it: Eddie or I. It couldn't have arrived at a better time: it was raining non-stop, Eddie was cranky, as he's got sniffles and I didn't want to take him out in his favourite garden. We've done painting and colouring, read a few books, but he wanted something new to discover.

Justin was just the right remedy for the miserable rainy day. 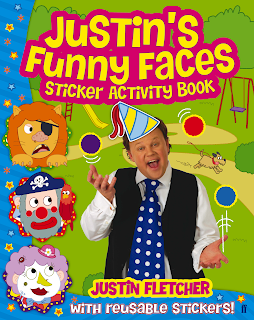 As I mentioned many times Justin is a big part of our life. My sons love his shows. And I think he is simply marvellous.
Justin Fletcher is a talented actor who has been working as children's presenter and voice over artist for the last fifteen years. He won a Bafta in 2008 for best Children's Television Presenter, and if it were in my power, I'd keep giving him Baftas every year.
In 2010 Something Special won the Bafta for best pre school programme and Justin won his second Bafta for best Children's Television Presenter.
He is very talented. Working with children who have special needs is not an easy task, but he is doing a great job. You can see how children respond to his jokes and kind words, how their shy smiles turn into wide grins.

Eddie calls him Tamba and every night when we go to bed, we go through the routine of saying "Papa is asleep, Sasha is alseep, Mr Tumble is asleep etc etc" to convince Eddie he should go to sleep as well.

The sticker book was a real godsend. It is a book with lots of stickers that you attach to empty faces. As stickers are reusable, you can move them around to create a totally hilarious effect. You clown could looke like a witch, and vice versa. Or do them as suggested at the beginning of the book, you can see all the images together on one page. 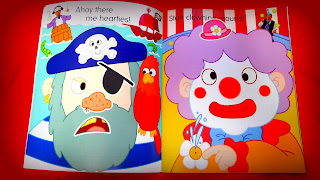 We loved the grumpy pirate and a funny clown, the smiley lion and the dreamy astronaut. 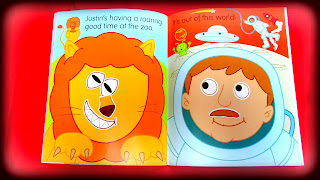 The Picasso-style lion above is Eddie's work. This book could be as educational as it is entertaining: just name all the facial features as you stick them on, or try putting them in the wrong order and ask your child to change them.

You will find Justin on the last page of the book, and he invites you to decorate him as you like. We thought we won't be too cruel to Justin and wouldn't add any witch's warts or an elephant's nose. I think he looks lovely. 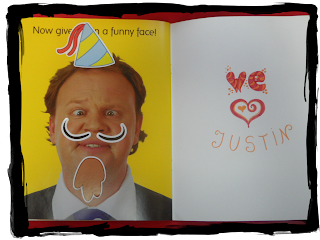 This brilliant sticker book will be available on sale at all major book shops from 4 October. You can also preorder it from Amazon.

And if you love Justin as much as we do, keep your eyes open for The Official Justin Fletcher Annual 2013. I have seen it at Sainsbury's already and it looks very good.

I have a copy of Justin's Funny Faces sticker book to give away to one of my blog readers.
To be in with a chance of winning, please use the Rafflecopter.
You must leave a blog comment, all the other options are bonus entries.
Good luck!


a Rafflecopter giveaway
Posted by Galina Varese at 13:27:00