Our Usborne First Words Flash Cards set is already quite battered. I bought it several years ago for our older son. And now it's Eddie's turn to play with the Flash cards. By now he can say most of the words in the pack.
This pack is based on the popular Farmyard Tales series, and all the cards are illustrated by Stephen Cartwright. His style is unique and very easily recognizable. You might not know the artist's name but you have surely seen his work.

Each card has a simple word and picture on the front, and the same word, without a picture, on the back - a great way to help children learn to read.

It is interesting to notice that some cards have very simple and basic images, like a trio below. You can't make any mistakes: an apple is clearly an apple, you can't confuse the cow with any other animal. 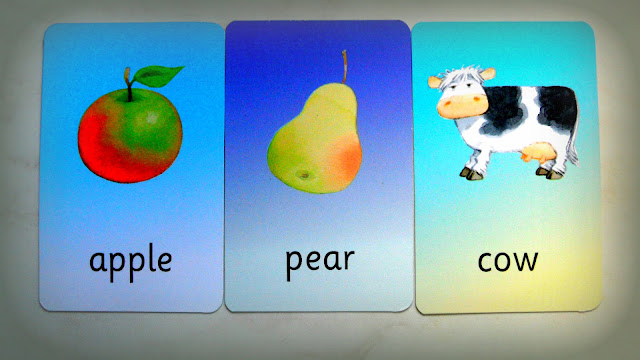 Some cards are a bit trickier. Take a mouse and a rabbit, for example. Eddie keeps calling a mouse a rabbit, and I can see why. Two images are very much alike, the animals are standing in the same pose, painted in the same colours. I understand that an adult would immediately see the differences in the shapes of the ears and a tail, but for a young child it could be utterly confusing. Perhaps it would have been better to make the difference more visible, by changing the pose and facial features. 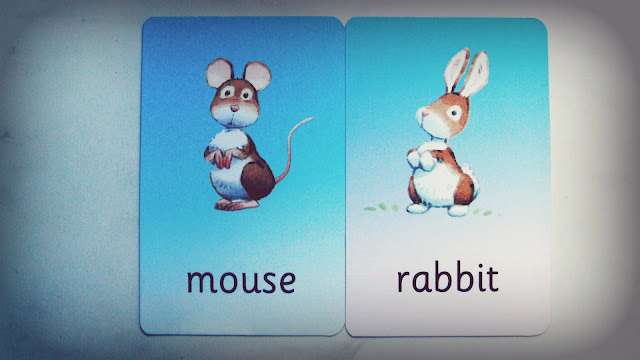 Along with the plain cards there are also flash cards that are way too fussy and have too many distracting details. Take a hat: it is decorated with the flowers, and there is a duck hiding behind the flowers. Eddie thinks he should say "a duck". Or the house card: two kids are playing football in front of the house. Eddie says "ball". What do you expect? The details only hinder understanding the concept. And if you compare the first three cards in the photo above and the cards below, there is no consistency in style. One is simple and basic, another is too detailed and fussy. 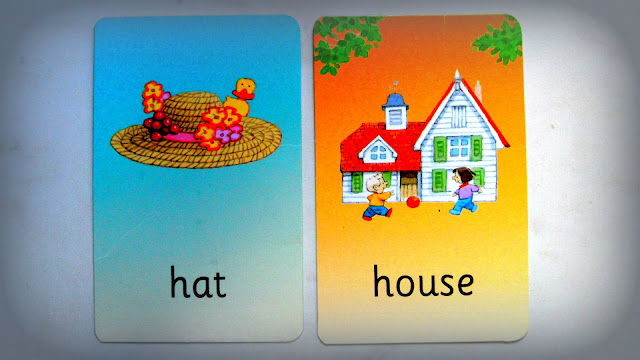 When we look at the cards below, Eddie usually mentions "egg, broken" or "sock, broken", which is actually true, the egg is broken and the sock has a hole. Again, these details are diverting attention from the concept. I think the artist should have taken the age group this set of flash cards is meant for into consideration. 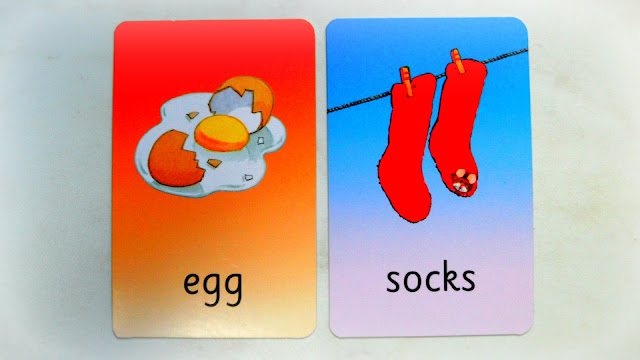 Eddie also likes to cheat a bit, when he sees a card with an umbrella he usually says "raining", as he finds the word umbrella quite a mouthful.
I often call Eddie "a silly billy". And when we look at the "goat" card I say "a silly billy" as well because a goat is eating a newspaper. The other day, when I showed this card to Eddie and asked him what it is, he thought and answered "Silly Eddie", bless him, confusing his billies. 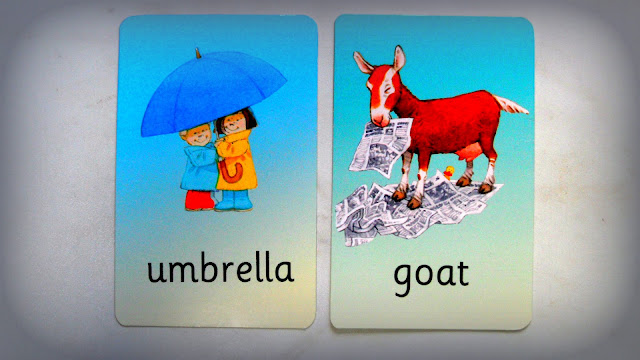 Overall, we love this set of flash cards, they are very colourful, bright and have cute characters. If you are a fan of Usborne Farmyard Tales, then this set is a useful one for learning new words.
With the younger child, you might use the cards to teach them new words, with the older children these cards will be helpful in learning to read.
Posted by Galina Varese at 12:01:00