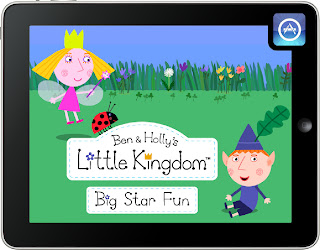 This is a high quality app for pre-schoolers, and it features all the original characters from the TV series as well as the music and sound effects. Young fans of Ben and Holly now have an interactive kingdom of their own.

When you open the app, you are presented with an option of playing (and flying, of course) as Elf Ben or Princess Holly.

There are four magical games to play and each game comes with different difficulty levels. As Eddie is 2 years old, we go for the Easy level. And even this level needs a certain amount of skills and dexterity of fingers when you move the figures around.

So, what games can you find in the Little Kingdom:

You can excel at Throwing Sticks and play fetch with the colourful Gaston.

Hiding is another fun activity. Ben and Holly are hiding in the Elf Tree, you have to be quick, catch them if you can, or they disappear. Eddie and I both enjoyed this game.

Sweeping the leaves: you have to help Ben or Holly to clear the ground, the leaves keep falling from the big tree and you need to finish the job before the time runs out. So far we haven't managed to clear it completely, and we are supposedly on the Easy level.

Apart from the four games above you receive a bonus game: a Sticker book. There are several backgrounds to choose and numerous stickers to add. Eddie loves this game, but he can be over-zealous in his stickering. He loves ladybirds, so as you can see, he has generously decorated the background with the ladybirds. 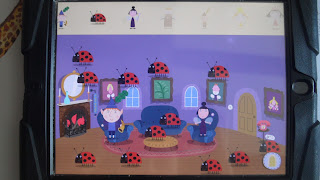 If your kids love Ben and Holly, then I would certainly recommend this app.

Saying that, Eddie prefers Peppa Pig app at the moment (I reviewed the app recently and wasn't sure how long Eddie was going to enjoy it, but so far he wants to play with it every day).
He is probably a tad too young for all Ben and Holly's games, as for example, cleaning the grass from the leaves requires quite a bit of patience, and I'm afraid that is not one of our virtues.
This app is probably best for a one-to-one session between a child and a parent, with parent explaining the rules and helping to navigate the games.

Ben and Holly's Little Kingdom: Big Star Fun app is available from the App Store for £1.99.