Around the Clock app: it's always Wombi o'clock

Learning to tell time is a tricky business. The best way to learn without getting bored is to turn a learning experience into a game. A new app for kids called Around the Clock from Swedish developer Wombi apps is a fun way to introduce the young children to the concept of telling the time.
Keep in mind though its primary purpose is not to teach how to tell time. 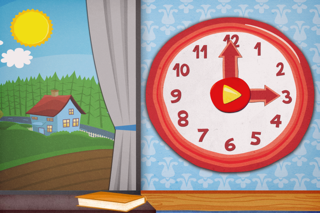 The idea is to play your way through a whole day. Every hour brings you a new mini-game or activity. And when they say mini-games, they mean it. You get very short interactive games, from brushing teeth to biking home, from putting the books on the shelf to finding a teddy bear in the dark room. After each mini-game you are taken back to the smiley ted accompanied by the music interlude (while my 2-year-old enjoyed the music, I found it a bit annoying, but then we have different tastes in music and I am obviously not the target audience for this app). 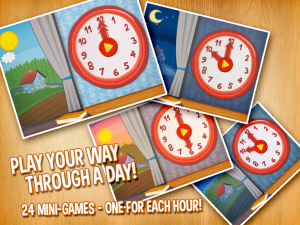 The games are simple enough for a young child to understand what to do and how to play (except when we started the game, our first game was aligning the stars. I was looking at the twinkling stars and had no clue what I was supposed to do with them. Eventually I got it, but it made me think that some sort of vocal instructions would be helpful, or a written message).

This game is good for any ipad novice as you learn how to do all the finger motions like tapping and dragging objects and swiping.
The grapics are rather simple, but bright and colourful.

Here is a video demo.

P.S. We were given a code to try an app for free for the purpose of reviewing.

P.P.S. An update: just wanted to add that Eddie has been enjoying playing with this app. It's been a few weeks since we first tried it, and now he is very confident. He loves the teddy, and the music interlude and does all the little tasks now without my help. I didn't know at the time of writing this review that this app would prove to be so popular with my little man.

There is a lite version of Around the Clock available for everyone to try with 5 mini games.