Any parent of young children knows who Peppa Pig is. She is probably more part of the family than a distant aunt Zelda.
It has been impossible to avoid the Olympic Games, whether you are a fan or not.
Cheeky little Peppa and her gang have their own Sports Day.

Peppa Pig’s Sports Day app was released on July 20th 2012, and is available in the App Store for £2.99 and is compatible with the iPad, iPod Touch and iPhone. 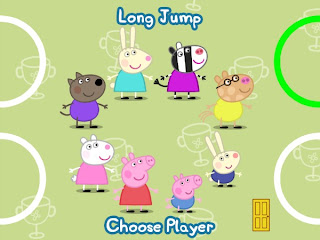 Usually I don't pay so much for the kids' apps (special needs & communication apps are a different matter), and at £2.99 it is a more pricey app. I was given a code for a free app for the purposes of the review, but being a luddite by nature, I got it wrong and ended up paying for the app.

What did we think of it?
Eddie was delighted to see his favourite Peppa on the ipad. Alas, he was disappointed as for the first couple of days we had problems with the sound, i.e. there was no sound at all, and the app without a sound is quite pointless.
Then the sound appeared without me doing any changes in installation, and I showed the game to Eddie.
I should also mention that I contacted the support team at P2Games and they responded quickly (but I should also confess, I could hardly understand what they suggested doing, the instructions were mind-boggling to someone as technically challenged as me).

One of the advantages of this app is that several people can play it at the same time, as it has a multi-player option. Or if you prefer, you can play on your own.
As you can see from the image above, you can choose 4 players for each game.

You choose one of the six games which include:
OBSTACLE RACE
LONG JUMP
ICE-CREAM MAKER
BICYCLE RACE
TUG OF WAR
ROSETTE MAKING 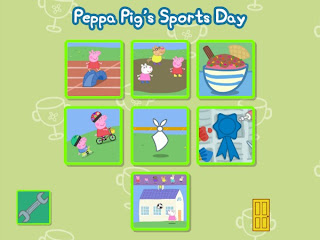 After playing several games with Eddie as I was teaching him how the app works, my impression was that everyone wins, as it was a draw every time. I thought because the game is intended for very young children, it was meant to be like this, so as not to upset the little ones, but later one of the players was selected as a winner, so my theory didn't hold water.

It is amazing how quickly the new generation is grasping the concept of the apps. My son is 2 years old, yet he knows how to play games on ipad.


This app is not what you would call an educational app, and I don't know how quickly my son will get bored with it and move onto a different, new app. So far he seems to be enjoying it a lot.

Little Peppa is a true pre-school phenomenon, she is a mini-Superwoman, and even jumped with Her Majesty in the puddle.
Posted by Galina Varese at 20:36:00