What a Souper Prize!

The Mediterranean theme appealed to me, my mind was buzzing with ideas: what should I create? which ingredients shall I choose?
Being married to an Italian, I learnt to cook a lot of Italian dishes. Before our kids were born, we used to travel quite a lot, and I have visited many Italian cities and places of interest.

Tuscany is known all over the world for its breathtaking landscapes and fantastic food. Soups are very popular in Tuscany. They are full of robust flavours and are a feast for eyes with their colourful ingredients.
Tuscany has been my inspiration for the Mediterranean soup of the month competition. I have played with different ingredients and ratios, adding one thing, or removing another. Farro seemed to be an obvious choice. It has been a mainstay of Tuscany for centuries. It has been known in Italy since the Roman times. It is also known as the Grain of the Legions and used to be the standard ration of the Roman Legions. I am a big fan of the movie Gladiator, and loved the idea of cooking a dish with the ingredients used by the Roman legionaries. 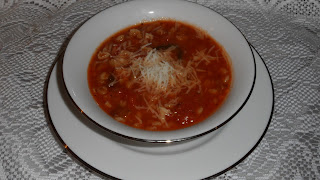 I was thrilled to find out that my Tuscan-inspired recipe was chosen to be the Soup of the Month for May. If you see an excited woman running along the soup isle in the supermarket in Witney, that will be me.
I just have to be patient. My soup will appear on the shelves any day soon. 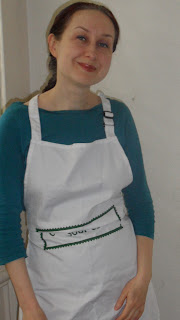 I am originally from Russia, and the Russians love their soups. Some of my early childhood memories are of my family cooking, like my Dad's soup - he used to add a beaten egg to the stock, so that it would be floating around in ribbons, or my Mum's borscht with its robust flavours and fab colours.
My great grandma was a cook in the baron's house in the days before the revolution (like Mrs Patmore in the Downton Abbey, but on a less grand scale; I wrote about her before, see here) and later worked in the restaurant.
She is long gone, but I imagine she would have loved the idea of her great granddaughter winning a cooking competition. And my Dad, he would have been so proud too. He didn't cook much, but for some reason the two simple dishes that he cooked for us when Mum was away (fried potatoes and the soup with the egg), outshone for us, kids, all Mum's spectacular cooking.

I consider myself to be a creative person, and cooking is one of the things that I enjoy.

And if I could win, so could you: go on, enter you recipe for the new challenge! The current challenge is to create a Hallowe'en soup.
Posted by Galina Varese at 09:47:00