I love baking challenges and was delighted to be asked to take part in the Bart's Jubilee Sponge bake-off. 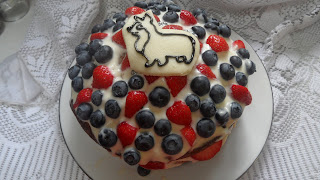 I received a bag of baking goodies including the self-raising flour, icing and granulated sugar and a selection of the Bart spices: ground nutmeg, ground cinnamon, mint, vanilla pod, ground nutmeg and Bristol Blend five pepper. 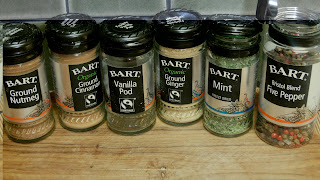 The recipe itself has been created by the winner of the Great British Bake-Off Edd Kimber. He came up with an idea of spicing up the classic Victoria sponge to celebrate the Queen's Diamond Jubilee this summer. The modern twist on the classic recipe included a selection of the spices from all over the world. The photo you see below is the cake baked by Edd Kimber. 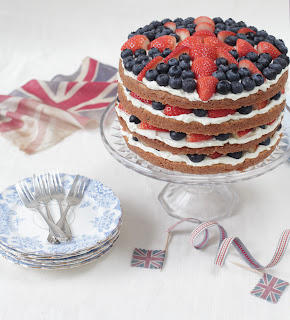 Adding the pepper to the sweet cake was a novelty idea, but I like exploring new tastes.
I realised I don't have a pepper mill (the spice jar wasn't the grinder variety), so off I went to get it as well as another 20 cm round sandwich tin.

For the filling and topping:


Method:
1. Grease and line two 20cm round sandwich tins. Preheat the oven to 180C/gas 4.
2. Cream together the butter and sugar until light and creamy.
3. Mix all the ingredients together and slowly add to the mixture, along with the eggs. 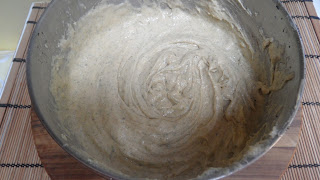 4. Divide the mixture between the two tins and smooth the tops. Bake in the oven for 20-25 minutes until well-risen and golden-brown in colour, and a skewer inserted in the centre comes out clean.
5. Leave to coll in the tins for 10 minutes then turn out on the wire racks to cool completely.
6. When completely cool, cut each cake horizontally so you have four thin cakes.

To make the task easier, I would suggest cut a line around the cake in the middle and then put a thread around like this. 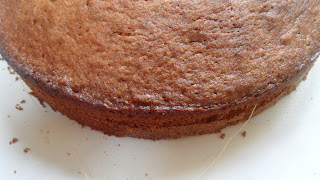 Then pull both ends of the thread together and hey presto you have two neat layers. 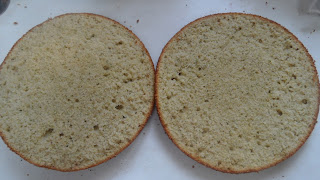 7. To make the filling beat together the cream cheese, cream and icing sugar until thick and smooth. Spread the cream on top of one cake layer and scatter over one quarter of strawberries and blueberries. 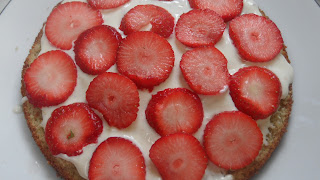 Top with another cake and repeat. 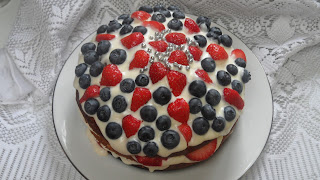 I had a feeling that the filling might be too runny with that amount of the cream, but against my cooking instincts decided to follow the recipe. It was runny, as I thought.
I would love to know how Edd managed to bake such straight flat layers. Both of my sponges were dome-shaped, so the cake wasn't flat either.
I also added more strawberries (400g as opposed to 200g in the recipe above, but reduced the amount of blueberries).
As you can see from the photo above, my flag was more like a blue and red rug, the berries kept sliding down. I decided: fine, this is not a flag, this is a rug for the corgi. So, I quickly cut out a piece of the white marzipan and using the writing icing drew a cartoonish dog. 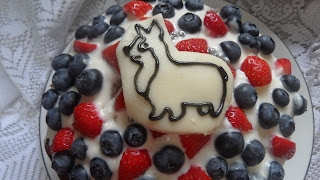 What's the verdict on the taste? I think the selection of the spices was a bit too random. The strong ginger suppresses the more delicate flavours of the vanilla, and to my taste, there was too much mint as well. The five pepper blend adds an intriguing warmth to the cake and works well with the cinnamon and nutmeg.
The sponge itself is very light, and the cake is very moist due to the amount of the filling and berries.
If I were to bake this cake again, I would probably remove the ginger altogether and reduce the amount of mint. I would also add much less cream to the filling to make it thicker. Or make a different cream altogether, with the cream cheese, vanilla sugar and butter, or a mix of mascarpone and ricotta.
At the same time I applaud the inventiveness behind this recipe. It looks festive and has an original taste.


P.S. This cake tastes better the next day, once all the layers have absorbed the cream. Our visitors loved it. My husband thought it was "exceptionally good".