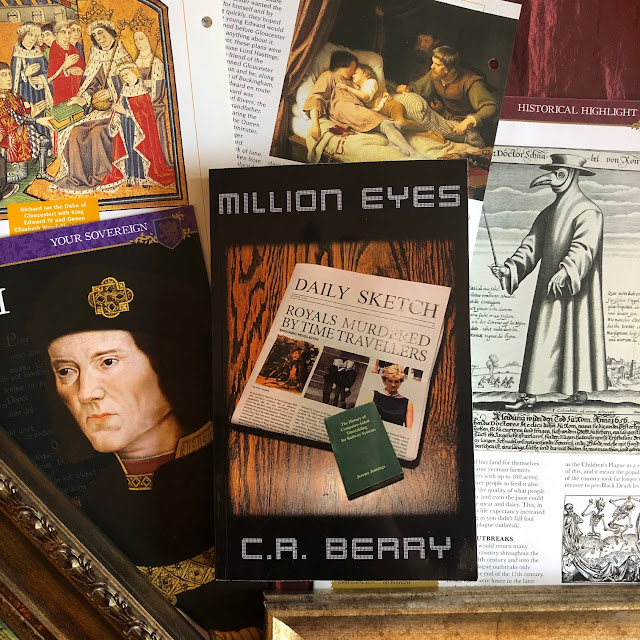 A loud, continuous hum pinched her ears. She felt sleepy, dizzy. She blinked. Suddenly there were people and vehicles everywhere, surrounding her car, and everyone and everything was transparent - like ghosts - and blurred together like countless photos superimposed over one another...
It dawned on Jennifer what this blur of ghosts meant. Time. All of it. The past, the present, the future. All of it happening at once. All of it merged in front of her eyes...

Million Eyes by C.R. Berry (Elsewhen Press), a fascinating and unusual novel, moves at a cracking pace from the past to the present, and back in time again.

As if meeting King William II in 1100 in the first pages of the book was not exciting enough, we learn that he has acquired a book under an improbable title of The History of Computer-Aided Timetabling for Railway Systems. Now, did that catch your attention?
William orders his chief minister to hide the book with a low-born family who would understand the importance of the book and can be trusted to protect its secrets.
"We must protect it," said William... "This book is evidence of a serious threat to the kingdom and of those behind it. It is an omen. An omen foretelling the future that God is compelling me to avert."

A few days later King William meets his death in the New Forest.

In 2019, a former history teacher Gregory Farro, is not convinced that William's death was a shooting accident. He finds evidence that a cabal of time travellers might be responsible for this "accident" and a whole series of events which have moulded the British history.
"Apparently this time traveller was pretending to be Walter Tyrrell and was looking for an unnamed "book" that the king had hidden. He then shot the king, talked to someone on what Ferro interpreted as a mobile phone" and vanished into thin air.

The mysterious book, which is published in 1995, is also mentioned in a letter to Edward III in 1348, as well as in a history book written in 1977.

Ferro blogs about his historical discoveries. Jennifer Larson, a history graduate, who is earning money as an admin assistant, is still deciding what to do with her life, when she stumbles upon the conspiracy/time travel blog.
She offers her help to Ferro, and together, they try to piece the relevant information together. Unbeknown to them, they are closely watched by Million Eyes, the biggest computer company in the world.
Their research makes them the targets of the unknown assassins who are set upon the task of rewriting the history and building an alternative timeline.

It's a darkly addictive story which weaves together the threads of the Princes in the Tower, the Great Pestilence, the death of William II, the mystery of Jack the Ripper and the tragic crash that killed Princess Diana.

Million Eyes is the first book in the series. It's published as an ebook on the 10th of January, and as a paperback on the 20th of March 2020. The author is currently working on the 2nd book in the series.
Million Eyes is an amalgam of genres - science fiction, with time travel as sub-genre and conspiracy theory. We get to know characters and concepts which will be developed in the new book.

There are some sinister figures who appear to hop from one historical period to another, and they have an agenda.

The concept of time travelling and its consequences, when a minor change in the past could bring on a profound shift and reshuffling in the future events is not a new one. I believe, it is called the Butterfly effect (part of the Chaos theory). But, of course what matters, it's how the concept is delivered - in case of Million Eyes - with a great aplomb and coolness.


I have read a few time-travelling books, and the technique of moving from one period to another is usually through some sort of portal, sometimes a permanent one, sometimes a moving entity.
The way the characters travel in time in Milliom Eyes is quite an unusual one (but I won't give you any spoilers).

This complex, dark, menacing novel breathes new life into the time travel genre. Readers who delight in conspiracy theories will take a great pleasure in this cleverly plotted tale.

Author Bio:
C.R.Berry caught the writing bug at the tender age of four and has never recovered. His earliest stories were filled with witches, monsters, evil headteachers, Disney characters and the occasional Dalek. He realised pretty quickly that his favourite characters were usually the villains. He wonders if that's what led him to become a criminal lawyer. It's certainly why he's taken to writing conspiracy thrillers, where baddies are numerous and everywhere.
After a few years getting a more rounded view of human nature's darker side, he quit lawyering and turned to writing full-time. He now works as a freelance copywriter and novelist and blogs about conspiracy theories, time travel and other otherworldly weirdness.
He was shortlisted in the 2018 Grindstone Literary International Novel Competition and has been published in numerous magazines and anthologies, including Storgy, Dark Tales, Theme of Absence and Suspense Magazine. He was also shortlisted in the Aeon Award Contest, highly commended by Writers' Forum, and won second prize in the inaugural To Hull and Back Humorous Short Story Competition.
He grew up in Farnborough, Hampshire, a town he says has as much character as a broccoli. He's since moved to the "much more interesting and charming" Haslemere in Surrey.
Website and social media links:
https://crberryauthor.wordpress.com
http://millioneyes.co.uk
https://gregoryferro.home.blog
https://twitter.com/CRBerry1
https://www.facebook.com/CRBerry1

Many thanks to C.R.Berry, Elsewhen Press and Rachel's Random Resources for my copy of the book.

This post is part of the blog tour, you may check out the other reviews along the route. 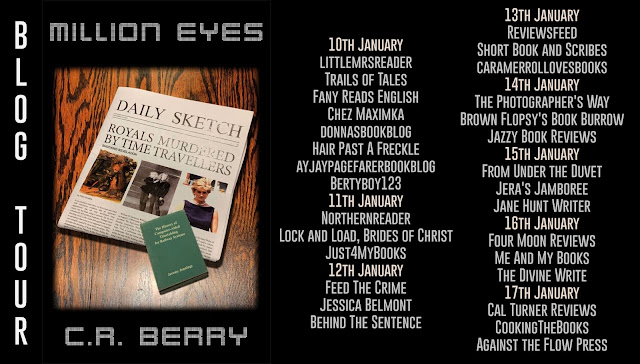 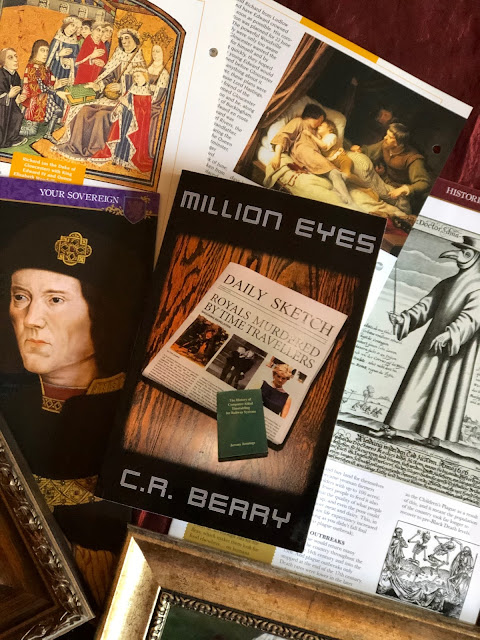