The Factory Made Boy by Christine Nöstlinger 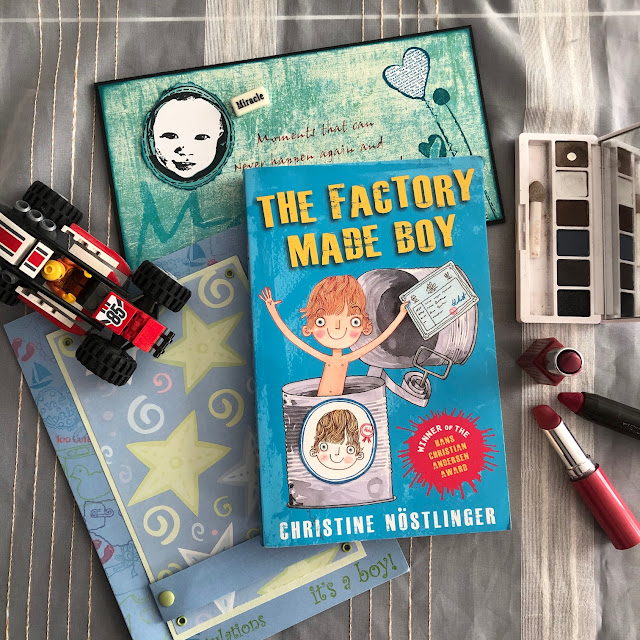 "Are you glad I'm here, Mummy?" Conrad asked.
Mrs Bartolotti looked at Conrad. Needs affection, she thought. Well, of course he does - everybody needs affection! And he's very nice too..."

It's not often you start reading a book, and fall in love with it at once.
The Factory Made Boy by Christine Nöstlinger (English translation by Anthea Bell) is a pure joy of a book. The story is wonderfully playful, whimsical and empathetic, with the most endearing characters.

It was my Mum who asked me if Eddie and I have read this book. She mentioned a book review which she had recently read and thought we might enjoy it. I haven't heard of this book, and cannot understand why this book and author have escaped my radar before.

Mrs Bertie Bartolotti is an artist who creates colourful rugs. She lives on her own, surrounded by a creative chaos and bright colours.
She has a gentleman friend, Mr Thomas, who visits her twice a week and they go to the cinema or theatre together. Bertie is content with her life. She can wear as much make-up as she wants and choose bright clothes, have a family pack of ice cream for dinner and be free from anyone's censure or judgments.
"Mrs Bartolotti never told anyone how old she was, so no one knew, and that meant she was several different ages."
She is also known for having a weakness for ordering things by post, whenever she comes across an order form in a newspaper or magazine, most of them totally random, like an animal encyclopaedia in 17 volumes, a subscription to a fish-breeders' magazine or a nudists' journal.

One day she signs for a big parcel. She is puzzled, as she doesn't recollect anything that she might have ordered in this size. Inside the parcel there is a big tin. Reluctantly she opens it.

"It was a very good thing the kitchen stool was just behind Mrs Bartolotti, because she got a considerable shock... She swayed, and collapsed on to the kitchen stool.
The creature who was crouching inside the tin can said: "Hullo, Mummy", and gave her a friendly nod".

It's a seven-year old Conrad, who comes complete with a birth certificate.

Though Bertie is horrified, she kindly accepts Conrad's presence in her life. She knows she has never ordered a child from the manufacturer, but thinks the order might have been placed a long time ago by her ex-husband.
The letter which accompanies the boy, tells that all manufactured children are "particularly easy to handle and control, and being the products of a highly developed technology, are quite free of those faults or defects which can occur in nature".

Bertie is overwhelmed by her new responsibilities. She is a free spirit, and doesn't know much about children. In a delightful spree of shopping, she tries to buy things that she thinks would please Conrad, but gets it spectacularly wrong. He expects to wear grey trousers and checked shirts, while Bertie presents him with the most colourful outfit she could find in the shops.

Conrad is a very sweet boy, who wants to be loved and gives love freely in return.
He is "made" to be a perfect child, he goes to bed early, doesn't want to leave any food on his plate and refuses sweets, he gets upset at the mere notion of rude words or slightly inappropriate songs.
Needless to say, for the freedom-loving Bertie, her whole world is reshaping fast, with the arrival of Conrad.

Her boyfriend Mr Thomas is smitten with the polite and obedient boy, and wants to be his father. Unlike Bertie who thinks children should enjoy life, do naughty things and make mistakes, he cannot find fault with anything about Conrad.
In a way, Mr Thomas and Conrad are kindred souls, they like order and quiet pastimes. They are also pretty conventional in their way of thinking.
For example, Conrad asks Bertie if it's right for a girl to protect a boy.
To which wise Bertie replies:"It doesn't make a bit of difference, Conrad... It's all nonsense about boys having to do the protecting! The important thing is for the person who needs protection to get it".
What a strong message! And how modern it sounds, considering the book was written in 1975.

Bertie Bartolotti is my hero. She comes up with a sage advice: "Now, you listen to me! Some things in this world are far more important than other things... and one thing there is no need to bother about at all is what other people say!"

Conrad goes to school and becomes friends with his neighbour Kitty (she protects him from bullies in school).

And then one day they are shocked when a letter arrives from the manufacturer: there was a mistake, and Conrad will be taken away to go to the correct parents.

Conrad's wishes are not taken into consideration by the factory, he is their property, and legally Bertie and Mr Thomas cannot do anything.

Will they submit to the merciless decision or fight for the right for their special boy to stay with them?

This quirky magical tale was the winner of Hans Christian Andersen award in 1984. It is captivating, original and full of heart.

We absolutely adored this book. My son said he wished there was another book of Conrad's adventures.

It's a truly unforgettable story, and if you come across it in a charity shop or can source or on ebay, snap it.
It was first published in English by Andersen Press in 1976. You can find other editions online - from 1999 and 2012.

My only criticism is the translation. I don't see the point of anglicising foreign names in translated books for children. It annoyed me greatly when we read Astrid Lindgren's Karlsson on the roof trilogy.
Just why do the translators think it's a good idea? Do they think that the British children are not able to read foreign names? That would be rather patronising and galling.
Frau Bartolotti's boyfriend Herr Egon is renamed into Mr Thomas. Kitti Rusika becomes Kitty Robertson.
Even the name of the name character is slightly changed from Konrad to Conrad. I would like to know the translator's reasoning behind this.

Minor irritants aside, this is one of the best books for children we're read in the last few years. 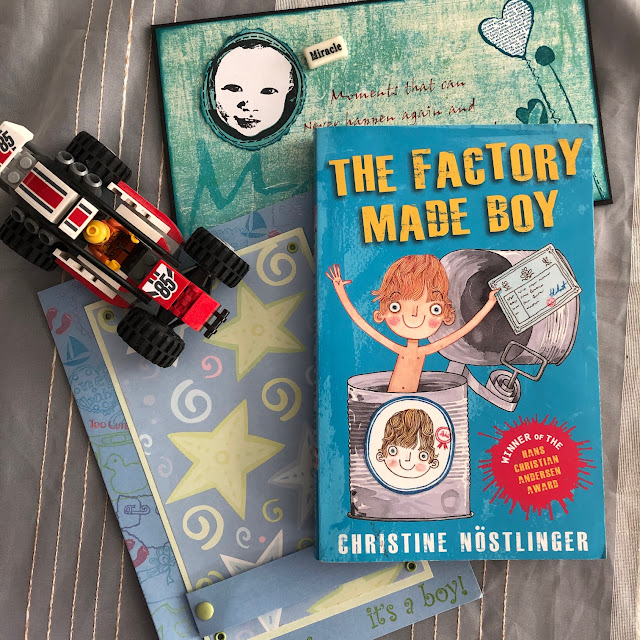