Beyond the Moon by Catherine Taylor #BlogTour (review + giveaway) 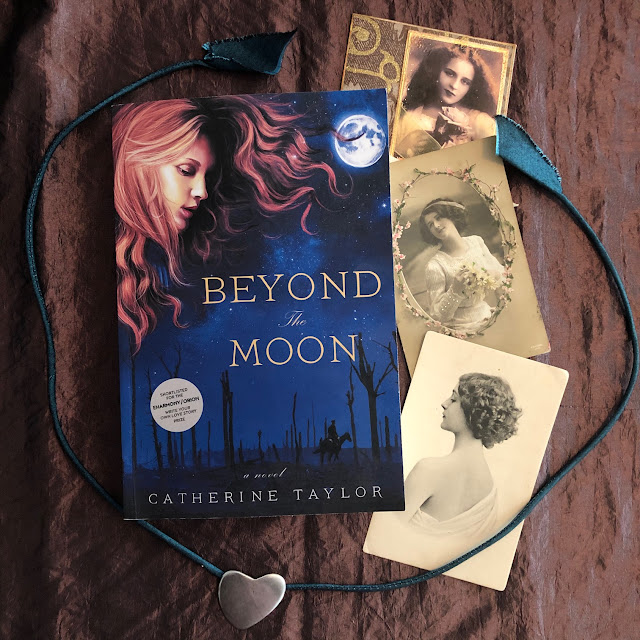 Round and round it went in her mind as she lay in bed, listening to the first birds chirping. Had the doctors been right about her all along? Had they been able to peer into her mind and see what she couldn't - that she was delusional?
What was he? Where had he come from? Was he simply the result of a psychotic episode? A hallucination? A product of her anxious, agitated mind? Could just being an inpatient in a psychiatric hospital cause delusions?
But how could she have conjured up something so realistic and specific in every detail? A blind, mysterious, dark-haired young man who spoke so politely and painted so exquisitely.

Beyond the Moon by Catherine Taylor is a novel which combines historical fiction with a time travel romance.
Louisa Casson has just lost her grandmother, who was her only family. Her mother died when Louisa was a child, her father abandoned her for the woman who was his mistress and immigrated to the other side of the world.
Louisa is heartbroken: "So that's it then, she thought. I'm all on my own. Not a soul left in the world I can call family any more. Except for my father - but he doesn't count".
Toasting her grandmother's memory with a bottle of vintage cognac while sitting on a cliff is not her brightest idea.
After an accident on the cliff, Louisa finds herself in hospital.
Since she is found by the rescue team at a notorious suicide spot, and she has a history of depression, she is admitted as a "voluntary patient" to a psychiatric hospital.

The Coldbrook Hall hospital is a large Victorian building surrounded by forests. It is chronically understaffed, and the patients are at the mercy of indifferent personnel ruled by the sadistic nurse nicknamed Enema, who enjoys her power over the vulnerable people.

Reading exposé articles on the hospital units run by private companies, the cruelty of the staff and the lack of proper treatment and provision are sadly not a fictional exaggeration.

One day, following another patient she befriends in the hospital, Louisa ventures into the closed off, dilapidated and abandoned wing. There she hears a call for help, and stumbles across a dark, old-fashioned hospital room. Inside she finds a mysterious young man, who has lost his sight, and who claims he was wounded at the Battle of the Somme.
Since it's a psychiatric hospital, Louise humours him by agreeing with what he says.
Only the young man is not delusional. Lieutenant Robert Lovett is indeed in hospital, recuperating after the famous battle of the WWI.

What Louisa doesn't realise at first, is that she manages to enter the door to the past.

Robert is a talented artist, with a promising future. Suffering from hysterical blindness, he is in despair. The medical professionals are not sure of the mechanism of his sight loss.
"Oh God, would he ever see again - well enough even to wash or feed himself, let alone paint pictures of birds and flowers, his favourite views of the South Downs and the cliffs? Or would he be shut up forever in this crypt of shadows, wretched, a prisoner in his own body, shirking his duty while the Somme campaign went from bad to worse, neglecting his men, gradually being erased from the world bit by bit?"

Two lost souls, vulnerable and feeling hopeless, Louisa and Robert are drawn to each other, breaking the barriers of time.

Beyond the Moon has been promoted as "Outlander meets Birdsong". The comparisons with Outlander are inevitable. Both female protagonists are aspiring to become medical doctors, both accidentally travel through the time portal and fall in love with a hero who lives in a parallel world of the past. Though there is enough gore (especially on the battlefields and in the hospital), Taylor respects her characters more and avoids the unnecessary sadism and often too graphic sex scenes which Gabaldon is known for.

It is a beautiful love story, set against a historically authentic backdrop. The front lines of 2016-17 are portrayed with great insight and compassion.
The war chapters are poignant and sad. So many young lives doomed. The appalling conditions of life in the trenches and the daily horrors of the medical hospital at the front make it not an easy reading. Some of the pages are heart-chilling and linger in the mind.

Beyond the Moon is a beautifully executed novel, with a powerful sense of time and place. It is a deeply moving story of love and heartache, a time travel romance of great imaginative depth.


This review is part of the blog tour. You can check out the other reviews following the tour: 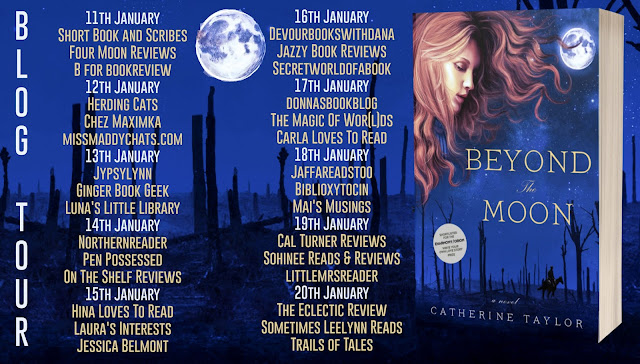 Author Bio:
Catherine Taylor was born and grew up on the island of Guernsey in the British Channel Islands. She is a former journalist, most recently for Dow Jones News and The Wall Street Journal in London.
Beyond the Moon is her first novel. She lives in Ealing, London, with her husband and two children.
Social media links:
Instagram - @catherine_taylor_author
Twitter @CathTaylorNovel
https://catherinetaylor.net 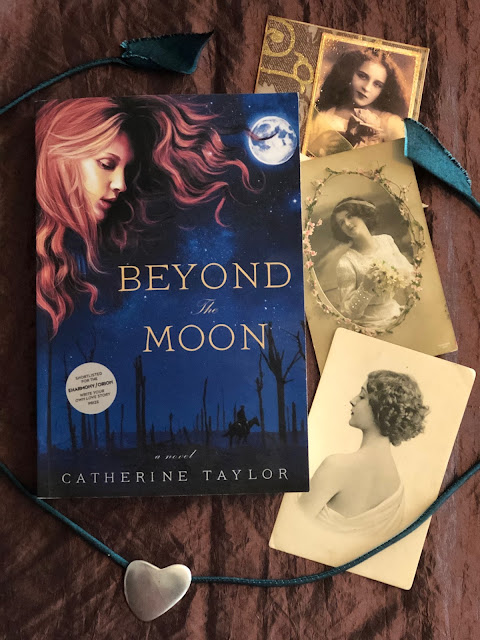 Giveaway
If you like the sound of this book, you have a chance of winning one of 5 paperback copies of Beyond the Moon.

T&Cs:
Worldwide entries welcome.
Please enter using the Rafflecopter box below.
The winner will be selected at random via Rafflecopter from all valid entries and will be notified by Twitter and/or email.
If no response is received within 7 days, then Rachel's Random Resources reserves the right to select an alternative winner.
Open to all entrants aged 18 or over.
Any personal data given as part of the competition entry is used for this purpose only and will not be shared with third parties, with the exception of the winners' information.
This will be passed to the giveaway organiser and used only for the fulfilment of the prize, after which time Rachel's random Resources will delete the data.
I am not responsible for despatch or delivery of the prize.

Please bear in mind, that this giveaway is run across several blogs.

Chez Maximka blog is only hosting the Rafflecopter gadget to promote the giveaway, and has nothing to do with any collected data or the selection of the winners.

a Rafflecopter giveaway
Posted by Galina Varese at 11:00:00