The Iron Chariot by Stein Riverton 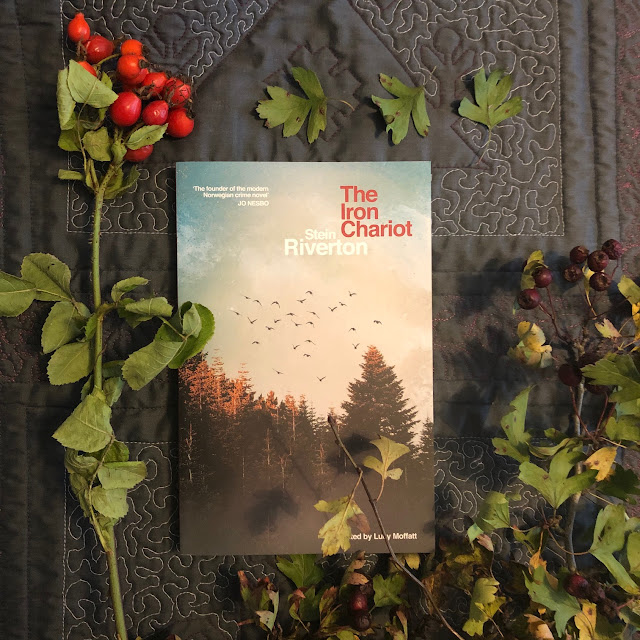 I seized the window to close it but stopped suddenly when I caught a sound far off in the distance, a metallic rattling borne to me on the gusts of wind, and which rose and fell along with them. The sound was coming from the plain.
It was the iron chariot again.

The Iron Chariot by Stein Riverton (translation by Lucy Moffatt; Lightning Books) was published in 1909. It has been voted the best Norwegian crime novel of all time in 2017.

The nameless narrator is enjoying a day of the languorous heat in the countryside. His companions from the boarding house and he are scattered in the high grass, listening to the summer breeze. Nobody is saying a word, they are all compelled to absolute inactivity.
Then suddenly their peaceful limbo is interrupted by a sound of swinging gates and approaching hasty footsteps of people running towards them, with a disturbing message: "We've found a murdered man up on the road".

A classic start of a classic crime novel. The use of the first-person narrative provides the readers with an internal observation and unique presentation of events.

We go back in time, to the evening before the gruesome discovery, when our main protagonist takes a walk across the plain. He plans to visit a neighbouring farm, hoping to play a game of chess, and most importantly, see the lady of the house, beautiful Hilde. He takes it for granted that he would be welcome, as the family (brother and sister) are sociable and know him well.
But instead of a warm welcome, his way is barred by the farm steward, who says that the family cannot receive him this evening.

Intrigued and offended by the refusal to see him, the narrator hides in the darkness of the garden and waits to see if he can understand what's going on. After a while, a man leaves the house. He's one of the boarding house guests, a forestry inspector called Blinde.

As the narrator walks back home, he meets a fisherman who asks him:
"Do you hear that?"
"What?"
"Hush", said the man, listening.
And now the sound came again, that infinitely distant sound of loose chains rattling.
"What is it?" I asked.
"The iron chariot", the man replied gravely. "It's a long time since I last heard it."

The iron chariot, according to the locals, is a bad omen, foretelling an imminent death. "Whenever some terrible thing was about to happen at Gjærnæs Farm, or whenever somebody was about to die, people always heard the iron chariot rattling its way across the plain. But nobody had seen it and it never left any tracks upon the road."

When the next morning the forestry inspector is found murdered, a detective is summoned from the capital, Kristiania.
Detective Asbjørn Krag is a rather annoying character, who appears to be inactive, insensitive and devious yet nosey. He doesn't think twice about entering the narrator's bedroom while the latter is still asleep and watches him sleeping, then comments on that as if it's the most natural thing to do. He brings the narrator to look at the body etc.

The second victim is found on the plain. The mystery deepens, as apparently this person died a few years earlier.

The narrator is drawn into the investigation - rather unwillingly on his part - and is slowly losing his sanity. His paranoia is increasing, he's finding it difficult to sleep, while the detective seems to look at everything as a big joke. Of course, his cheerful persona is an act. He enjoys baiting our protagonist: "I am, in fact, something of a poet", he said. "A poet of fear".

The setting of the novel is reminiscent of the other famous sinister location in The Hound of the Baskervilles. Riverton's Gothic descriptions of the nature provide an eerie background to the unravelling mystery.
The landscape becomes an integral part of the narrative.
"The sky was the colour of dynamite and so still that the underwater skerries ventured above the surface. On mornings such as this fish hurl themselves upon the hook in rage and when you reel them, their eyes foam with blood; for men, it is suicide weather."

Lucy Moffatt who translated the novel, deserves a special mention. Her beautiful translation brings an opportunity to English-speaking fans of the Scandi Noir to finally read "the book that started it all".

Writer Nils Nordberg described The Iron Chariot as "something nobody had tried before: a psychological thriller disguised as a detective novel, with one foot in the horror tradition of Poe and the other in the modern world".

The Iron Chariot is a superb mystery, with stacks of atmosphere and psychology. 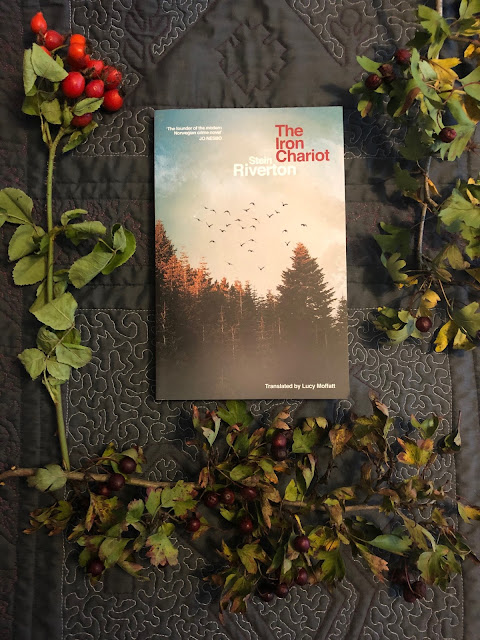