Let It Snow by Sue Moorcroft 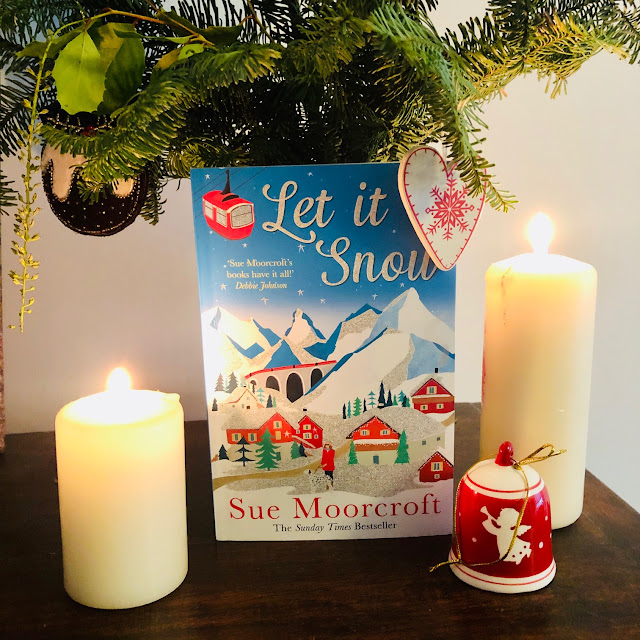 Trundling through a whitening landscape the minibus coped without missing a beat and the singing began again, this time their favourite: "Let it snow". Lily joined in. It was good to open up her throat with a jolly winter song and wash away any lingering bad feelings... The white flakes danced and tumbled around them, magically creating fluffy blankets on fields and roofs.

Festive book releases at this time of the year are plentiful, how to decide what to pick?
It depends on what you enjoy the most. I do love a good mix of Christmas crime and Christmas romance (not at the same time, I hasten to add).
I enjoy looking at the jolly festive covers, often glittery and colourful, or creepy and atmospheric, depending on the genre.
For my Christmas reading, I bought two romance and three crime paperbacks.

Let It Snow by Sue Moorcroft is a heart-warming read, and a perfect escape from the seasonal panic. It's a story of secrets revealed, family bonds being tested and a romance unfolding along the travel adventures.

Lily Cortez is very protective of her family. She grew up with two mothers - Roma (a freelance photographer) and Patsie (a lawyer), and her sister Zinnia. For many years they were a tight unit, and couldn't have been closer.
But a secret from the past makes a big crack in the unit.
As it happens, Lily's father, who she knew nothing about, just died - she wasn't a one-night stand as Lily was made to believe. Her mother had an affair with a married man, who never knew she was only in the relationship to get pregnant.

Lily is in a turmoil. She feels betrayed. "It's just tough to find my father and lose him in the same instant". Determined to find out more about her late father, Lily discovers she has two half-brothers, one of them the landlord of The Three Fishes pub in a village called Middledip.

Fast forward two years, and Lily is working at The Three Fishes, keeping her identity from Tubb, her half-brother, who left the pub for Switzerland to be closer to his family as well as recuperate from the heart attack. His health doesn't allow him to work, and the pub is left in hands of a newcomer, Isaac.

Handsome Isaac lost his own restaurant, through not his own fault.
His highfalutin girlfriend who left him after his business collapsed, suddenly re-appears in his life and asks him to look after their dog Doggo. Isaac, who missed their dog more than he missed his ex, immediately agrees. Isaac is drawn to Lily, but he has a conduct code not to get involved with his co-workers. Yet Lily is uber-attractive.

Lily is planning to go to Switzerland for Christmas with her singing group the Middletones. Lily's part-time job at the pub is supporting her other ambition, to be an exhibition designer. She has designed the stands for British Country Foods at the Christmas food show in Switzerland. The Middletones are going over to sing at the events and "lend an air of Britishness to things".

Everything is set. That is until Lily's immature and rather unpleasant sister Zinnia storms into The Three Fishes, raging at some imagined crimes committed by Lily. In the ensuing argument, an accident happens which takes Lily to A&E. The worst part is - the trip to Switzerland is now looking doomed. Lily cannot drive the bus with the singing group across Europe.

And who comes to the rescue but Isaac?!

It's a festive book, so you rather expect it to have a warm romance. Along the main love story, there are several sub-plots and different love developments (from teenagers to mature lovers).

Sue Moorcoft has a talent of creating a background scene in a sentence or two. An atmospheric landscape is sketched out of a few precise lines.
It was the same with the sea scenes in A Summer to Remember (set in Norfolk), when you could immediately smell the sea and hear the waves.

She conjures up the snowy landscapes of Switzerland with a few masterful strokes, like:
"They drove towards black-and-white peaks that wore clouds around their heads like scarves." (such a poetic description)

"...pausing to catch his breath, shading his eyes to look back over the snow plain punctuated with lines of dark jagged conifers, snowy peaks rising up behind. they were so clear that Lily felt as if she could reach out and touch them..." (a vivid scene which reminded me of our very long winter in Massachussetts, on the border with Vermont)

"She thought of the snow in Switzerland on the day they'd left, filling the air as if it couldn't wait to erase all the colour in the world." (and again, so true, like the snowdrifts of Russia, this immense whiteness which erases all the other colours)

It so happened that I was reading this book, when I felt quite low. I've mentioned already on my blog that for family reasons, we are spending the coming Christmas, split in pairs. I will stay at home with our elder son, while my younger child will travel to Italy with his father to stay at the grandparents' house. It feels me with gloom and even despair. This book allowed me to escape in a world of snowy romance. It is like a big warm hug in a time of sadness.

I'm not a dog person (we always had cats when I was growing up), but you cannot but fall in love with Doggo, who's boisterous, silly and endearing.

Cosy up with a book this Christmas - pull the duvet tight around you, get a cup of something hot, be it tea or cocoa, maybe a box of your favourite chocolates by your side, and enjoy a festive story! 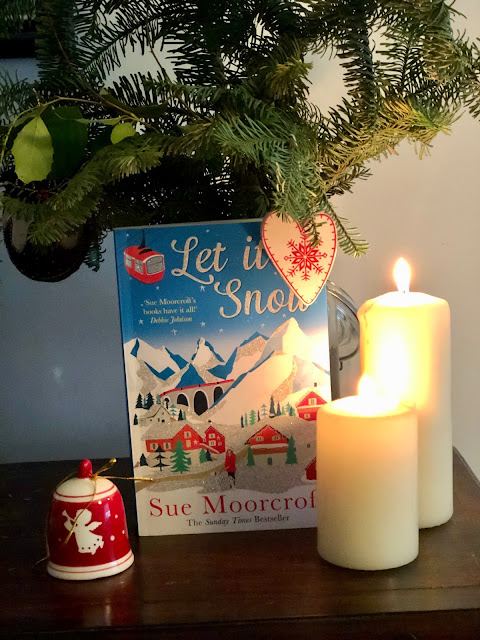