Room starts with a series of unconnected close-ups of a scratched wall, a dirty skylight, a sink, you hear someone whispering "Go back to sleep"... Young Mum Joy and her five-year-old son Jack are "entombed" alive in the Room. It all feels surreal and claustrophobic, yet this 10x10ft space is their reality, their enclosed world. Ma (Brie Larson) was kidnapped as a teenager and kept in the shed with the skylight by her captor.

This courageous young woman tries to build a new world for her son which goes "in every direction, all the way to the end". She constructs their life around the routine and teaches her son, he's a good reader and an imaginative soul.
For her it's a prison, which she dreams of escaping from, for her son it's the only world he knows. Their domestic routine is threatened by the weekly visits from Old Nick, the captor who brings the food and things and uses the mother as his sex slave, while the boy is hiding in the wardrobe.
After watching the film, I started reading the book by Emma Donoghue, which I bought ages ago, and never had a chance to read before. The book is more nuanced than the film, and the film lacks the unique grammar of Jack's inner monologue. Quite of a few details from the book were changed. For example, breastfeeding is one of the constants of Jack's life and his strong bond with his mother. In the film it is only hinted at, when Jack tries to lift his Mum's tshirt. I understand this was probably not easy to replicate in film, there is so much a child actor would be comfortable with doing.
Also the book shows in great detail just how inventive and creative the mother is to keep her son's min stimulated. She invents the whole curriculum and home-schools him in the most unconventional way, like making him repeat whole passages he just heard on TV, or crafting things with whatever meagre materials they have at their disposal, that would put any Blue Peter presenter in the shadow, she shows great wisdom and ingenuity. Again, this is less prominent in the film.

What the film managed to convey though is how authentic and truthful the story feels, it is haunting, gripping and compassionate.
I cried watching the film. A lot. It is such a heartbreaking story, very moving and inspirational.


It brings parallels with the real-life stories of abduction and imprisonment. It is a tragic story, yet at the same time there is so much love between the mother and child, that it is also uplifting. For her, her son is not a result of immense suffering and abuse, he is the most cherished creature on Earth, her companion and salvation. They are dedicated to each other and are fiercely protective of each other.
For her he agrees to go along with her most risky escape plan, thus saving them both.
But once outside the confined world they knew for so long (or all his life in Jack's case), they have to adapt to the "real" world outside. Adapt, adjust, survive and keep on protecting each other.
The power of love is palpable in this film, thanks to the great acting by both Brie Larson and Jacob Tramblay. 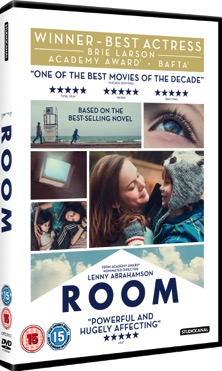 Lovely people from Studiocanal have kindly offered a Room DVD prize as a blog giveaway.

If you haven't seen the film, and would love to win a DVD, please enter this blog giveaway, using Rafflecopter entry form.

T&Cs:
The giveaway is open to the UK residents only.
Once the Rafflecopter picks the winner, I will contact them regarding address details, if they do not reply within 28 day, the prize will be allocated to another person.
Please don't forget to leave a comment, as it is the only mandatory step, I will make sure the winner selected by Rafflecopter has complied with T&Cs.
The giveaway will close on 29 May 2016 (at midnight)
Good luck!

a Rafflecopter giveaway
Posted by Galina Varese at 00:30:00